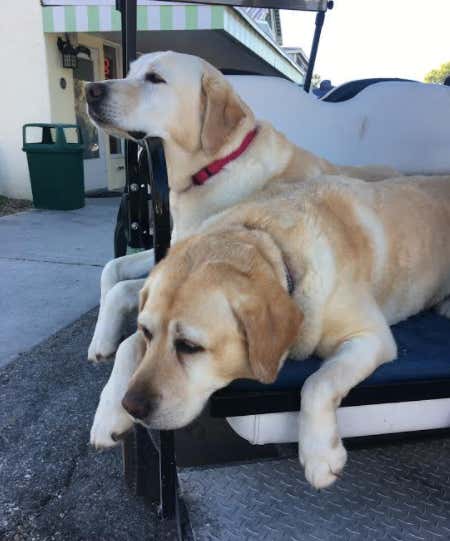 Hey guys, I’m down in Florida with my family for the weekend. We have 2 yellow labs named Milou and Rosie. Barstool is a dog-friendly company, and I’ve met some great dogs around the office. But Milou and Rosie would tear the scruff off these little bitches, given the chance. They grew up in the woods of Maine, hunting squirrels and barking at minorities.  I think it’s because there is so little diversity in Maine that Milou and Rosie get spooked when they see a person of color. We tried to train them out of their racist ways by making them watch a bootlegged DVD of Black Panther, but they fell asleep during the opening credits. After all, they’re dogs.

People often ask permission to pet the dogs. Depending on their race, we’ll either say “yes, they’re friendly” or “run away as fast as you can.” It’s for their own protection. Some dogs are set in their ways, like old men who fought in ‘Nam and sit on their porch, hurling invectives at the “Charlie” that walk by. You can’t teach an old dog new tricks, or a progressive, accepting mindset.

This morning, we took the dogs into town on the back of the golf cart. I won’t even explain where I am or why the people here travel around by golf cart. Just understand that it’s in Florida; that should be enough. We parked the cart at the coffee shop and went in for some cappuccinos. When I came out of the shop, I noticed a woman putting her face near the dogs and attempting to take a selfie. I nearly spat out my cappuccino despite the fact that hitherto our exchange, I had yet to take a sip. Who the fuck is this bitch? I walked up to the cart and said hello with the tone of a guy who is meeting the man who stole his wife.

“What are their names?” she asked, her question oozing entitlement. She was from the south and spoke with a twangy-folksy drawl that felt more affected than authentic.

“Milou and Rosie,” I replied, my response dripping with disdain.

She backed away a step, held her phone at arm’s length, and addressed the dogs: “Milou, Rosie, look up here. Look at the camera.”

She was commanding my dogs to look at her camera for a picture. Have you ever hated someone so much that you wished you had access to HIV-positive syringes of blood to inject in her neck? I looked around for some shady character who might be holding such an item. Alas, the community down here is older, and leading-age chemical weapons of the HIV sort are hard to come by. I suppose that’s a good thing, given how tough it is to cure the virus.

She took her picture. The dogs didn’t give her much, thankfully. I doubt it will move the needle on her Instagram following. She didn’t say thank you to me or the dogs, nor did she pet them. The entire exchange felt transactional, and we (Milou, Rosie, myself) felt like dirty hookers.

We live in a society. If you want to pet someone’s dog, you need to ask permission beforehand. If you want to take a selfie with someone else’s dogs, don’t. And above all else, you cannot direct a stranger’s dogs to “look at the camera” like you’re some hot-shot style photographer. Don’t speak down to my dogs. Unless you’re a hot babe. In which case, take all the pictures you want. Hell, put them to sleep and eat them on a shish kebab if that’s your thing. It’s considered a delicacy in some parts of the world.