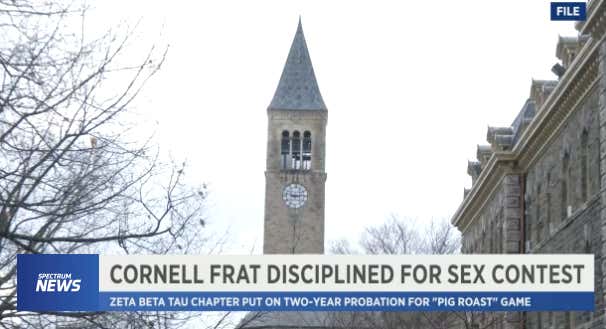 FOX NEWS – A Cornell University fraternity chapter has been put on two-year probation for holding a sex contest that members dubbed the ‘pig roast’ in reference to the weight of the women they slept with, the New York Post reported.

University officials launched an investigation of the Zeta Beta Tau fraternity last year after hearing reports about the secret game, in which members could get ‘points’ by having sex with women.

In the case of a tie in the contest, the win would go to the member who had sex with the heavier woman. The new members were told not to inform the women about the contest.

If frats are wondering why they’re getting cracked down on so hard lately, they might want to take a glance at what idiots like Cornell’s Zeta Beta Tau are doing up in Ithaca.  I mean there are two hot button triggers that have a zero tolerance policy these days: hazing and disrespecting women.  Take a stroll through the internet at some point and see what happens to people who comment on a woman’s appearance, let alone their weight.  The fact somebody who is part of Greek Life in the year of our lord 2018 thought it was a good idea to have a “Pig Roast” sex party where you get judged and scored on how fat the girl you have sex with is…I don’t even know the word for how preposterously stupid that is.   As a frat fan who thinks the “abolish all fraternities because they are pure evil” narrative is wildly overblown, I’ll tell you what, it makes it a lot harder when some people are just braindead morons.

Listening to this woman have to describe the contest live on the news was pretty funny though.