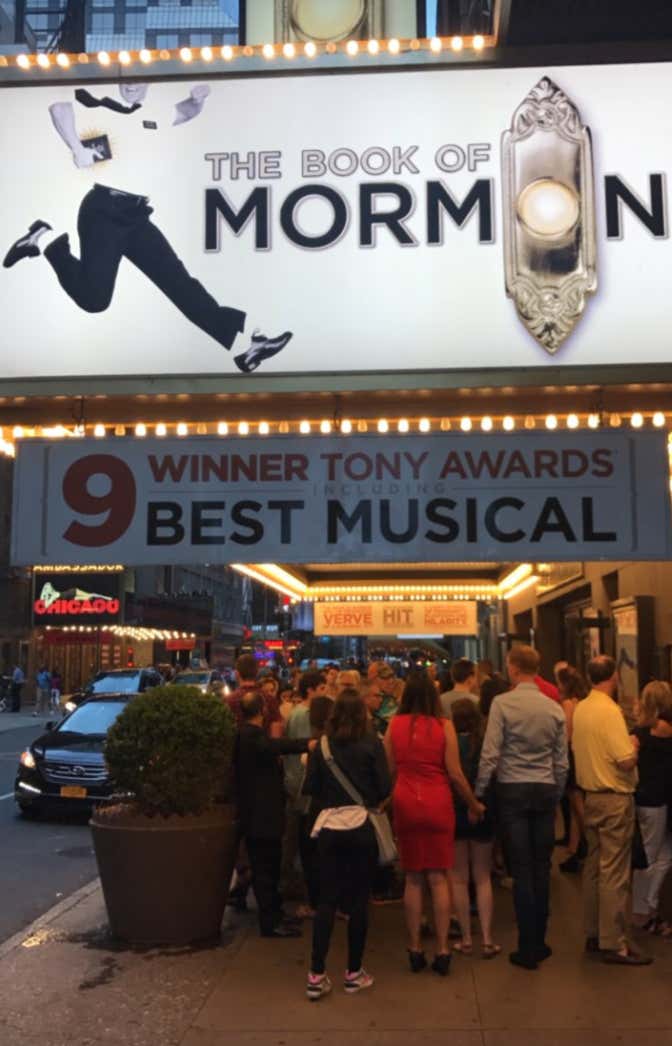 So a little back story on this. I’ve been living in New York City for about 6 months now and I started to get the feeling I haven’t been taking full advantage of living here. There’s so much to do and see in this city that I get overwhelmed and end up just going back to my apartment and watching Netflix. Up until going to The Book of Mormon on Friday night the most New York thing I had done was step over a homeless person with zero remorse. So I decided to change that. Also, going to a Broadway show was a topic of conversation when myself and Frankie Borrelli were driving back from Avalon a couple weeks ago. The Pizza Maker got me so gassed up about Broadway shows that I bought a ticket the second I got home.

The days leading up to the show were strange because I kept getting weird looks from people when I told them I was going alone. To which I say, go fuck yourselves. Doing things by yourself is the bees knees. All I see on places like Twitter dot com is people who decided to spend lots of time with another person being miserable. And it’s just like going to a movie alone. The best part is you follow your own schedule. I did what I wanted when I wanted. And the night wasn’t completely devoid of romance. I treated myself to a slice of pizza before the show and then bought myself a couple drinks once I got there. I was seducing myself and it was working. I even got bold during the second act and put a hand on my knee which led to me jerking off later that night.

The seats were just as small as everyone said they were gonna be. People were fucking tiny back in 1925 when the Eugene O’Neil Theater was built. The theater architects certainly weren’t expecting a cankle-bearing Midwesterner with an unquenchable appetite for Chinese food to be plopping down in those seats. But there I was. It was all good once my legs went numb.

The location of my seat wasn’t the best because I didn’t have equity when Peter Chernin came knocking. I was able to touch the back of theater with my hand. Here’s a picture from my seat 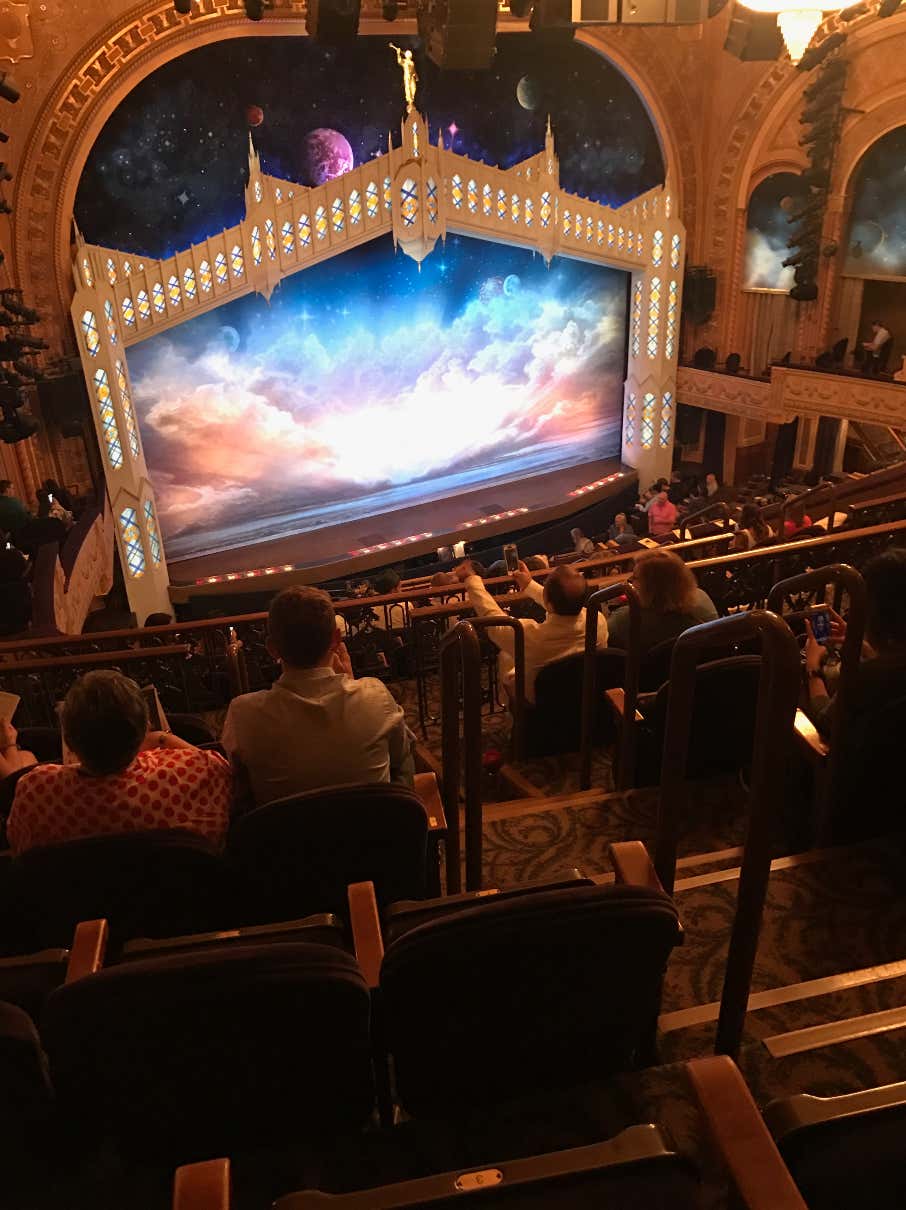 But it ended up being fine because the theater was much smaller than I anticipated. In my head, I was picturing an arena. I thought I was going to be sitting at the Broadway equivalent of the Barstool table at KFC’s wedding. Luckily I was wrong. I could hear and see everything perfectly.

Everyone was dressed up. I was not. 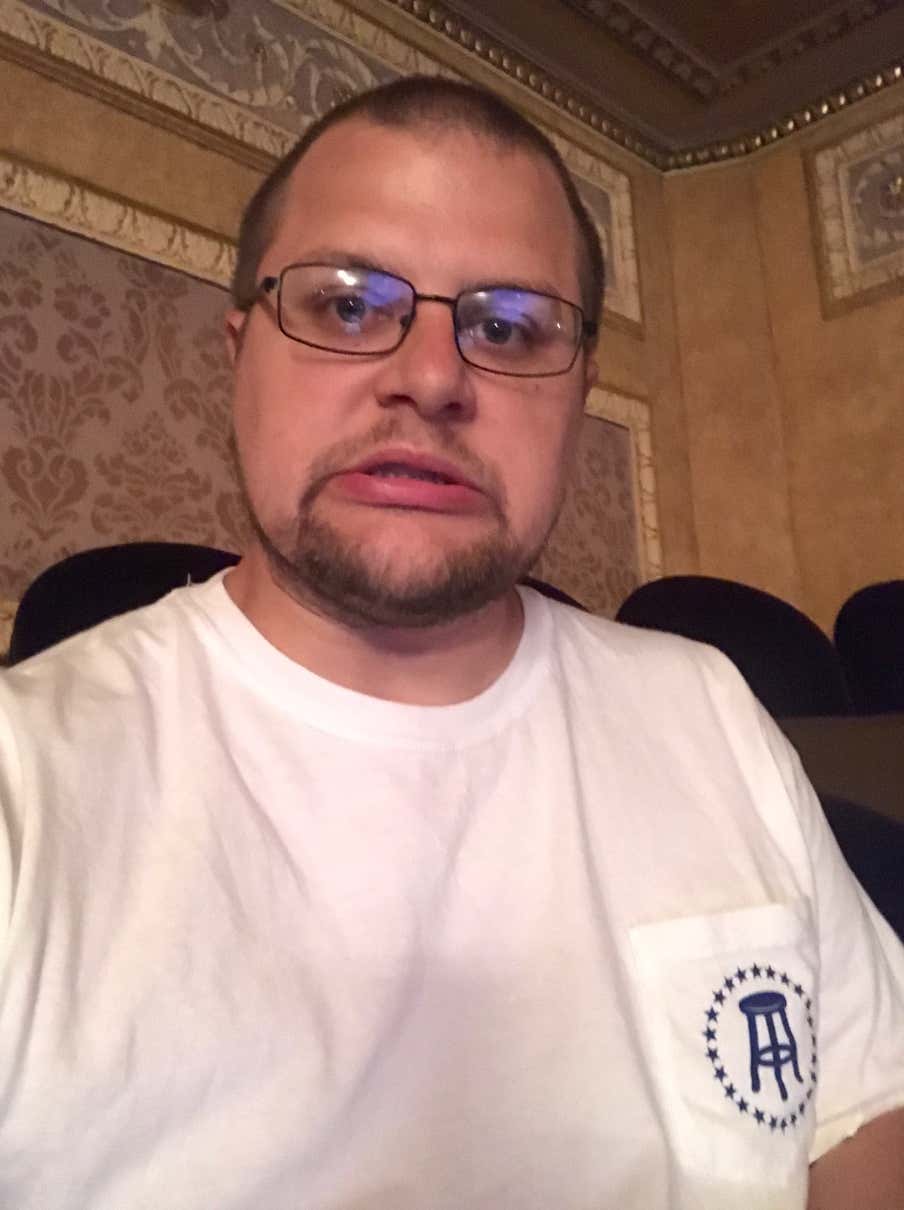 This was a big time worry of mine that ended up not being that big of a deal at all. I thought it was gonna be a big deal because, over the course of my time here, I’ve been denied by multiple bars for the way I dress. I dress like shit. I know I dress like shit and I don’t care. I like being comfortable. If I had worn uncomfortable pants and an uncomfortable shirt and had to sit in a chair built for ants I would’ve been miserable. So I wore what I wear every day. I actually got denied at a bar just last week. I chatted up the bouncer for a second then was like, “Alright well I’m gonna head in” and he was like, “No man, you’re not.” I still will not be deterred. I will continue to dress like a guy who refuses to grow up regardless of setting or situation. That is my solemn promise to you.

The show itself was great. I’m not exactly breaking any news there. The show has been running for a solid decade and shows no sign of slowing down. Although it would be funny if I thought it sucked. That would really be something. But I didn’t. The Book of Mormon was AWESOME. I went in not knowing what to expect at all. I didn’t read anything about the show. I’d never even been to a musical before (well I did see West Side Story at Cedar Rapids Washington as a kid and it was a delight). And guess what? It blew my goddamn mind. I had a blast. I laughed and laughed and laughed and almost cried. I almost cried at a part that wasn’t even sad. It was near the very end when the whole cast is singing. I almost burst into tears. It was great. I was walking on sunshine when I left the theater. It turns out going out and doing stuff is actually fun. Who knew. Go do stuff.