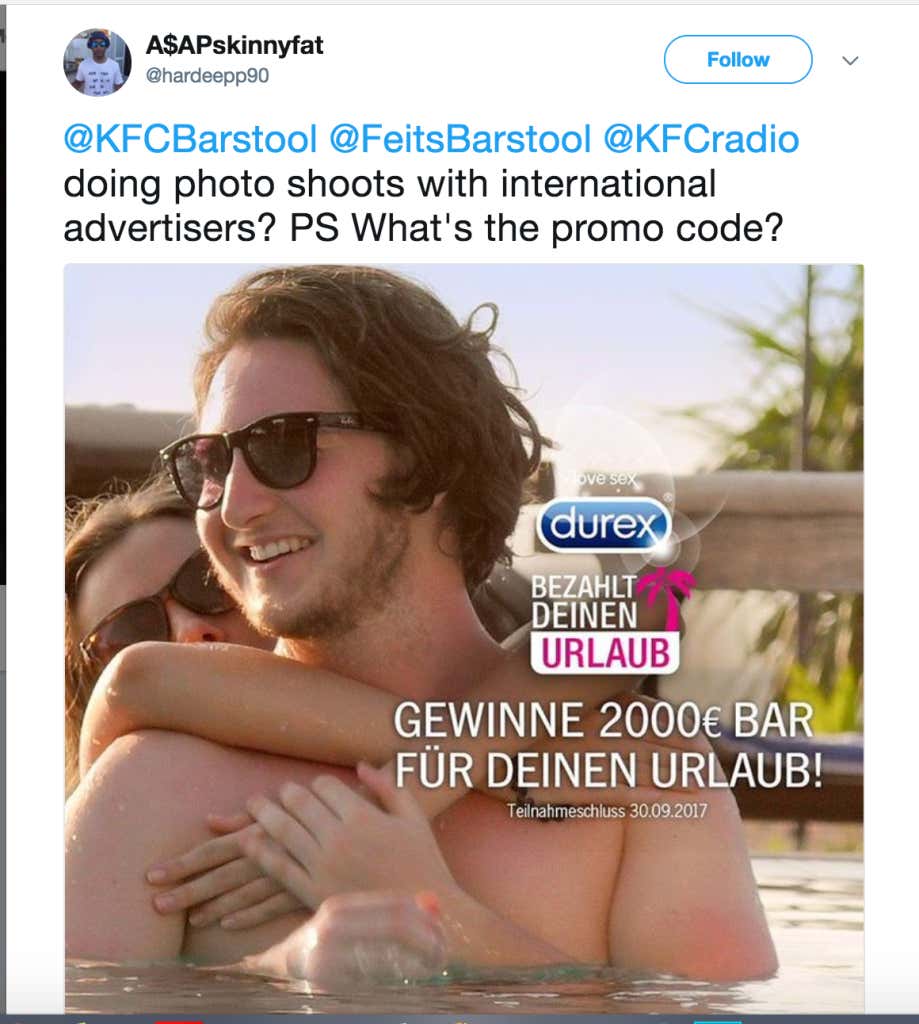 Everyone at Barstool gets tons of “lookalikes” tweeted at them every single day, and I mean tons, if your mom forgets to wax her mustache tomorrow someone will tweet a pic and ask if she’s Big Cat, but I think I actually get it the most. I’m the many faced god. I look like everybody, from fish to cartoons if you have two eyes and a larger than average nose then I probably look like you from some angle. So, I don’t really post these or even RT them anymore.

But this one? I’m not sure that’s a lookalike. I think that’s actually me and Durex (my personal favorite condom brand, to be sure! A lot of guys don’t like condoms but not me, I love them. Huge condom guy. Well… not a huge condom guy, but a big fan of average sized condoms. Specifically Durex. When you’re looking for a tight, natural feel to protect you from gonorrhea there’s no better penis wrap than a Durex) owes me some money for this. There are just too many resemblances there for this to be a coincidence and the only logical explanation is that Durex drugged me and dragged me to Germany for a photoshoot. You can’t tell me there’s another dude on the planet with all of the same exact features as me. This dude has the fat face that says “I should’ve stopped binge drinking after college… but I didn’t,” he’s got the scraggly facial hair that says he wishes he was a man but he’s certainly not, the oversized Ray Bans to hide his big nose, the gross sausage hands, the great hair… the only other person on the PLANET with all of those features is me.

I don’t know how they did it, but somehow Durex Germany got me in an advertisement and I think it’s only fair that I’m compensated accordingly. And by accordingly I mean I’m owed more than just the pep in my step I’ll have for the rest of the day knowing that I’m hot enough to be cast in a condom ad in Germany.