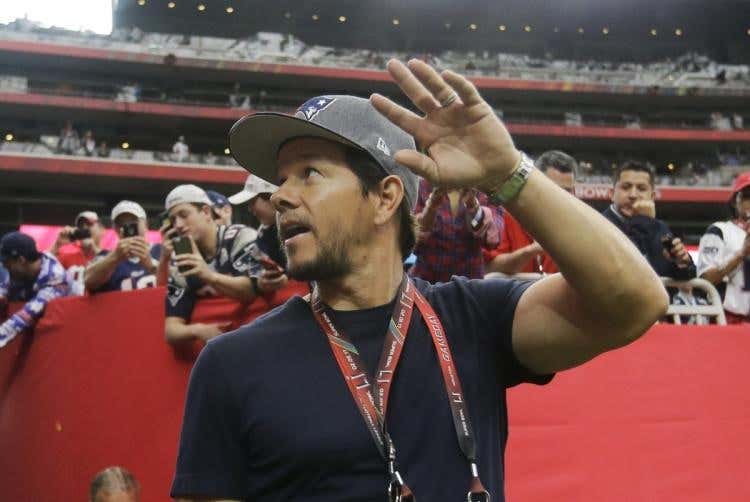 The latest Men’s Health includes a feature on Mark Wahlberg to plug the movie he’s in, the one about J. Paul Getty that replaced Kevin Spacey with Christopher Plummer. And the Super Bowl LI question comes up:

Last year, a mini-scandal arose when Wahlberg was seen leaving the Super Bowl before his beloved Patriots mounted their historic comeback. At the time, he told reporters he had a sick son who needed to get back to their hotel. That’s partly true. The Wahlberg family was watching the game in a luxury suite in Houston’s NRG Stadium while the Patriots were getting pounded. Wahlberg and Rhea Durham’s second son, 8-year-old Brendan, was not handling it well at all.

“He was spitting out F-bombs and going crazy. It was bad,” says Wahlberg, shuddering as if he’s reliving the moment. “He was lying down on the carpet. He was very upset.” Rhea wanted to stay, but Wahlberg wasn’t having it and left with his boy.

There’s a quote that gets attributed to Mark Twain that he probably never even said but it doesn’t make it any less true. And it is “When you tell the truth, you don’t have to remember anything.” And it’s never been more relevant than it is in this case.

Not that anyone in the world bought Mark Wahlberg’s original “sick kid” excuse. As anyone with kids will tell you, that is the first card you play when you’re trying to hide your own screw up. It’s the perfect, all-purpose Hall Pass to avoid being answerable for all your negative behaviors. Late for work? My kid was sick. Blow off some commitment? Sorry, little Madison came down with something. You want to skip out on some relative’s terrible holiday party? Oh, we’d love to but the kids brought something home from school and we don’t want anyone to catch it. Even though it’s a blatant lie 95 percent of the time and everyone knows it, they’ll never question it because they sound like a monster if they do.

Well every last one of us knew Wahlberg was lying and called him out on it, so now he’s changing his story. It went from “My kid was sick” to “My kid is such a huge Patriots fan just like me that seeing them fall behind by 25 points was too much for his system to handle so we had to leave for his own good.” Right. He loves them so much that seeing them down 28-3 made him sick.

This latest excuse is not only pure, Grade A horseshit, it’s an insult to every Pats fan – young and old – who was in the stands taking all sorts of abuse from the Falcons’ bandwagon jumpers. Who weathered the storm, rode it out and made it sound like a Patriots home game in the 4th quarter and overtime. The common man who stood his ground in the stands. And who never got a field pass to do this at Super Bowl XLIX:

Look, it’s not that hard to just admit you gave up. You quit. You want an example? I’ll give you one. I confess that I didn’t watch Dave Roberts’ steal in 2004. It pains me to say it, but it’s true. For the first and only time in my life I flat out quit on the Red Sox after they lost Game 3 of the 2004 ALCS, 19-8. I hated myself for raising two kids to be Red Sox fans. Humiliated that I’d done one son’s room over with Sox wallpaper, a Sox bedspread, Sox pillowcases and the whole nine. And so I bailed. The Game 4 win only felt like delaying the inevitable. Until a couple of innings into the afternoon game the next day, I was out. I’m ashamed to admit that. But I never lied about it or hid behind my 8-year-old. And in my defense, the Red Sox to that point had never pulled off the impossible comeback. Under Wahlberg’s close, personal friend Tom Brady, the Patriots had done it literally dozens of times.

So stop the lying, Wahlberg. Quit changing your story. Admit that if they had been up 28-3 all the F-bombs and all the hissy fits from your kid in the world wouldn’t have kept you from staying until the end so you could get back on the field for the celebration. Confession is good for the soul. Trust me.
@jerrythornton1