What a power couple. Two people who are absolutely crushing life these days. If these guys started a podcast, it would be so much better than my podcast. Call it Orange is the new black President. Fuck that’s good.

I love seeing extremely distinguished people talking about normal shit. I’m sure that their recorded conversation turned into a polished discussion of world affairs, but for this brief moment, these two world leaders are showcasing a normalcy we so rarely see from them. (Yes, I do consider Harry a world leader. He’s the Prince of England). Makes you think you could have a beer with these guys, which might lead to more beer, which might lead to shots, and then who KNOWS what could happen. I don’t want to drink a beer with Obama and Harry; I want to drink 15 beers and try heroin for the first time with them. I’m sure they know a guy with the best stuff.

Without a doubt, my favorite moment is when Harry is explaining how the BBC will cut their 40 minutes to 20, as though Obama will care about details like that: 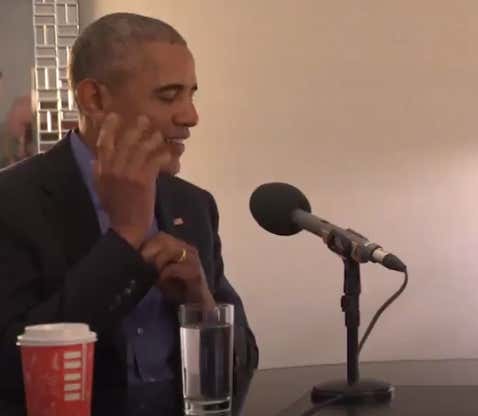 “It’s gonna be fine.” In other words, I don’t give a shit. Let’s move on. Post-Presidency life is a sneeze in the breeze and a quick radio interview with the Prince of England will not move the needle on Obama’s Cadillac, which is henceforth set on cruise control with the top down. The dude is steering with his knees, eating sandwiches, and has the seat reclined so far that he’s looking through the wheel to drive. He’s on a permanent vacation from now until death and even Malia’s unchristian behavior (smoking cigarettes, drinking underage, attending Harvard) won’t ruffle his feathers.