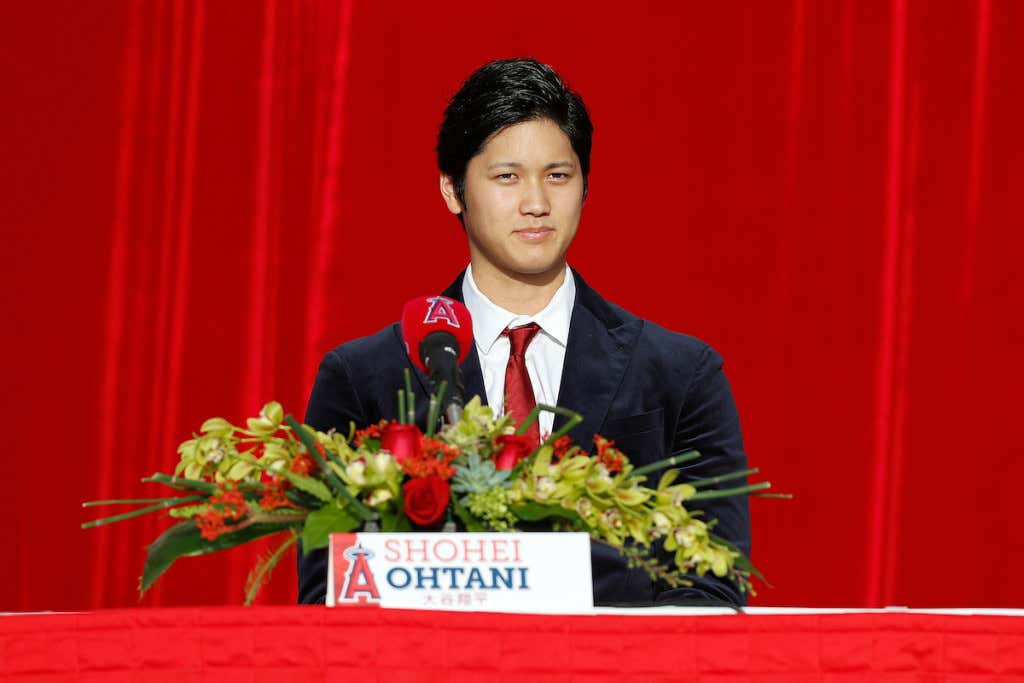 The Japanese Babe Ruth, they call him. After one of the most highly anticipated international free agents to ever come over to the United States finally signed with a major league club, it was time to eagerly await his big league debut. Wait to see what this 23-year-old kid’s got. If you were invested in the process of teams courting his services, then I’m sure you’ve watched more YouTube videos of him than you’d care to admit.

Shohei Ohtani chose the Angels as his new home, and was unveiled during a parade-like press conference a few days ago. It was a celebration, almost, where Angels fans gathered in droves to welcome their new two-way star. Well, just days later, Angels fans — and baseball fans, for that matter — were hit with some rather discouraging news regarding the right-handed phenom via Jeff Passan of Yahoo Sports.

New Los Angeles Angels star Shohei Ohtani has a damaged ulnar collateral ligament, according to a physical obtained by Yahoo Sports, and underwent a platelet-rich plasma shot in October in hopes of treating the elbow pain caused by it.

Ohtani, the 23-year-old right-handed pitcher and left-handed power hitter who signed with the Angels on Saturday after a frenzied recruiting process, has a first-degree sprain of his right UCL, according to a report dated Nov. 28 and performed by Dr. Masamitsu Tsuchiya at Doai Kinen Hospital in Tokyo.

While a first-degree sprain is the least severe of UCL injuries, further damage could lead to Tommy John surgery, a reconstructive procedure that sidelines pitchers for a year. The shot of PRP, a biologic of centrifuge-spun blood that is used to promote healing, was administered Oct. 20, according to the report, which was distributed to teams after Ohtani entered Major League Baseball’s posting system. Ohtani, the report said, “will be most likely available to start his throwing program approximately a month from the PRP.” After returning to Japan from Anaheim, Ohtani was seen playing catch Tuesday, according to reports in Japan. Sports Illustrated first reported that Ohtani had received the PRP shot.

“Although partial damage of UCL in deep layer of his right UCL exists,” the report said, “ … he is able to continue full baseball participation with sufficient elbow care program.” In addition, a “small free body” floats in Ohtani’s elbow near his UCL, according to the report.

Well, that doesn’t sound too good. It would seem as though the plan is for Ohtani to push forward despite the degree of damage that has already been done to his elbow, but this sounds like a ticking time bomb as to not if but when he’ll need to go under the knife. By now, you’re well aware that the harder you throw, the more at risk you are for injuries that would require Tommy John surgery to repair, and Ohtani has been clocked as high as 102 MPH. Unfortunately, TJ surgery is a matter of if not when for most hard-throwing pitchers, but in Ohtani’s case, it’s now fair to say that he’s at a much, much higher risk than the rest of the pack.

You’ve gotta feel for the kid, because he literally chose to come to the MLB earlier than he could have, forgoing hundreds of millions of dollars in the process, just so that he could get here and play as soon as possible. If the injury worsens, it’s going to be quite the downer if he could’ve just stayed in Japan, undergone surgery there, and came to the MLB with $300 million in his bank account. But if you’ve read up on Ohtani, he’s made it clear that he wants to “earn” it all. Doesn’t want to be handed anything.

Well, the first thing he was handed in the United States was bad news, and that really sucks. If you’re a baseball fan, you’d better be hoping for the best, because it’s going to be cool as fuck to see a pitcher gas you up at 102 on the gun and then take you deep 15 rows back.