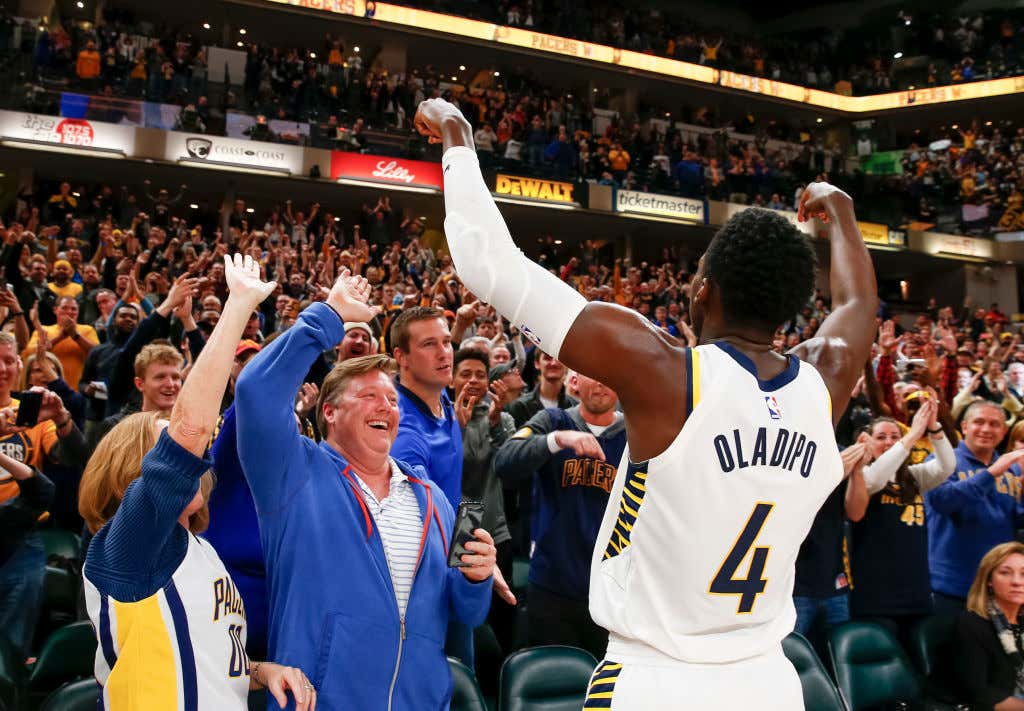 Happy Monday everybody and welcome back to another edition of Last Night In The NBA where we catch you up on everything that went down from the day before in the Association. Not only was Sunday filled with NFL football, but there were also 6 quality NBA games that happened throughout the day, most of which were close and entertaining. It was a lot of fun, I’m sorry if you missed it. If you did, here’s what happened

We may as well get the one game that wasn’t really competitive out of the way. The Raptors are taking full advantage of their dogshit December shedule, and have now won  6 in a row. It is pretty crazy that it’s looking more and more likely that the top three seeds in the East will ALL have at least a 10 game winning streak this season. Can someone research that for me and tell me when the lat time that happened was? Has to be rare as shit.

Per usual, TOR was led by DeRozan and his 25 points on 9-15 shooting

but they also got a nice 20 from Ibaka on 8-13, who has quietly been playing some of his best basketball of the season recently

Despite being up 17-2 early, SAC somewhat hung around until DeRozan just took over in the third, and you may not know this, but it is the Raptors that have the best point differential in the East, despite the Celtics having the best record. They lead the East in scoring at 111 a night, and are third in defense, slightly behind DET. It is hard to gauge how good they are because of their poopoo soft schedule recently, but that’s not their fault. They’re beating the teams they’re supposed to be beating and that’s all you could ask for.

For SAC, it was weird. They shot 47/42% for the game, but had just four players in double figures.

If I had to sum up the night for the Kings, this would probably be the best way to do it

Full blog is coming. Just know that revenge is pretty goddamn delicious. So is having the most wins in the NBA.

Don’t let the final score fool you, this may have been the game of the night. I want to go on record right now, Victor Oladipo has to make the All Star team for the first time in his career this year. He’s been incredible, and I’m sorry if this takes the spot of your favorite player, he deserves to be in. After matching Lebron blow for blow and ending the Cavs 13 game streak, Oladipo backed that up with a 47/7/6/2/1 on 15-28 shooting (6-12 from deep) performance. My word.

He’s now up to 24.5/4/5 with a 23.52 PER on 48/44% splits. You could argue he’s having one of the best seasons of any guard in the East right now. Especially when you factor in that the Pacers are 16-11 when almost every talking head said they were going to be real bad.

and it was the 12-2 run in OT that officially put the nail in DEN’s coffin. Don’t look now but IND is now tied with CLE for the 2nd most home wins in the East. Don’t let them get homecourt in the first round!

For DEN, hard to win when you turn it over 20 times and give up this many points. They blew an early 13 point lead and wasted a nice 25 point outing from Trey Lyles

and a solid 21 from Gary Harris

The Nuggets are now 4-10 on the road which stinks out loud, and really haven’t had a good win in weeks. Maybe the Pelicans win? That was 12 games ago. The good news is they are just 1.5 out of the top spot in their division, so they are very much still in it for a top 4 seed. But that road record is nothing to joke about, with only the Utah Jazz being worse at 2-9 and they are barely still in the playoff hunt.

Good thing DEN lost, because MIN was able to pick up some separation with their win over the Mavericks. As is the case with DAL lately, this was was probably closer than many Timberwolves fans would have preferred, but it still counts! That’ll usually happen when Wiggins goes 3-12 like he did in this game, but luckily they also have these dudes named Karl Anthony Towns and Jimmy Butler, who are more than capable of picking up the slack

They finished with 50 of the 97, and despite turning it over 18 times, they lost just one quarter in this game, and it was 24-23 in the first. Thinbs is continuing to be short with his rotations, which if I had to guess will bite them late, as he played just 8 guys in this game and all his starters played at least 34 minutes.

For DAL, their second unit let them down a bit. The starters were solid, all five in double figures and for the most mprat shot the ball well both from the floor and from deep. Then it was time for the second unit and they went a nice 8-21, and 5 of those makes came from JJ Barea.

The Mavs had won 4 of 6 before this little 3 game skid, but if you’re a DAL fan you have to be happy with their compete level. They simply don’t have the talent, but at least they aren’t mailing it in.

I’m confused. I thought the Sixers held Embiid out against CLE so he could have more time to rest for NO, and then we get to Sunday and all the sudden he has back tightness and misses this game too? This was the second game in a row they probably win if they have Embiid, and I get wanting to be super careful, but also, let the kid fucking play. At some point holding him out is going to keep costing you, and if you look at things right now, the Sixers aren’t a playoff team. The thing is, their other guys are BALLING. Simmons had a solid 27/5/10

making it look easy as hell out there, and Redick had one of his best games as a Sixer with 28

it has to be frustrating as hell for Sixers fans that they are losing these games with a healthy Embiid on the bench. Give me a break with back tightness. I get holding him out if he plays the first night of a back to back, that makes sense, but he hasn’t played since Thursday. I really hope the Sixers aren’t just doing that Sixers thing where they are hiding some sort of injury or something. We need more Embiid on the court, period.

For NO, with no Embiid, you guessed it, the frontline ate, and they ate big time

and Jrue Holiday had 34

The Sixers don’t really play defense when Embiid isn’t on the floor, and you can see that clearly in those highlights. This was a big win for NO who is now in the 7 spot in the West, and just imagine how fun a NO/GS series would be, even if there still is basically the whole season to go and it probably won’t happen. KD vs Boogie is something we all need to see.

Who would have thought, get Porzingis back, let him dominate, and boom the Knicks are back to winning games!

Also shouts to Jarret Jack for his contribution of 19/4

and Dougue McBuckets for finally getting buckets

The Knicks have now taken PHI’s spot as the 8th seed, and currently there are 3 teams from the Atlantic Division in the top 8 seeds. Shit if you want to get crazy, BKN is just 2.5 games out. Can the entire division make it in? That would be wild.

For ATL, you suck. We knew this, but you still suck.

And that’s it! You’re now all caught up on everything that happened the night before in the NBA. We have 6 more games on tonight, including NO/HOU, POR/GS and TOR/LAC. If you’re watching the Pats instead and miss anything, come back tomorrow and I’ll tell you all about it.