Welcome back to Rob’s Monday Morning Movie Review! Today, we’re taking a look at Guillermo Del Toro’s newest effort, ‘The Shape Of Water’, which stars Sally Hawkins, Michael Shannon, Richard Jenkins, and Octavia Spencer. I’ve been looking forward to this movie since I first saw the trailer many months ago, and as you could tell from my headline, it didn’t let me down. 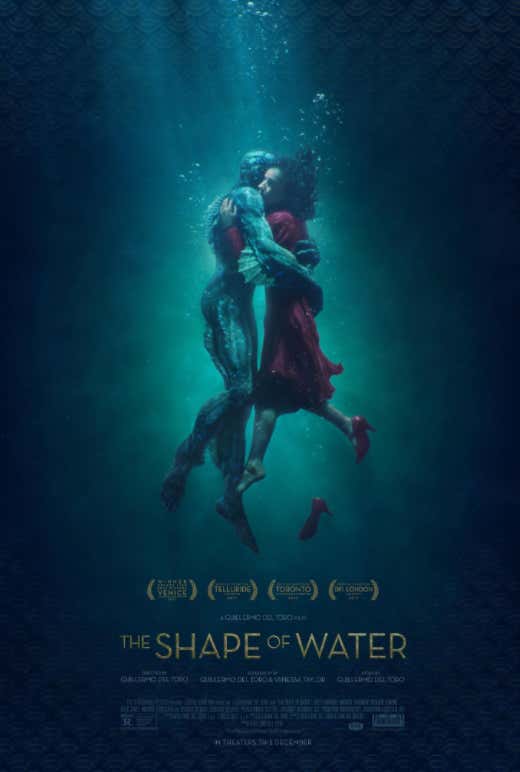 Elisa is a mute, isolated woman who works as a cleaning lady in a hidden, high-security government laboratory in 1962 Baltimore. Her life changes forever when she discovers the lab’s classified secret — a mysterious, scaled creature from South America that lives in a water tank. As Elisa develops a unique bond with her new friend, she soon learns that its fate and very survival lies in the hands of a hostile government agent and a marine biologist.

You could tell two things about this film from it’s opening credit sequence: it has a gorgeous aesthetic, and a perfect score to match. That sets a great tone early. The cool colors this film operates in provide an amazing look and feel to parallel the actual narrative they tell about the amphibious creature in the lab, and the set design is undoubtably the most unique I’ve seen all year (although that’ll most likely change later tonight when I see ‘The Last Jedi’). It reminded me a lot of the video game series, “Bioshock”, if any of you have played that. 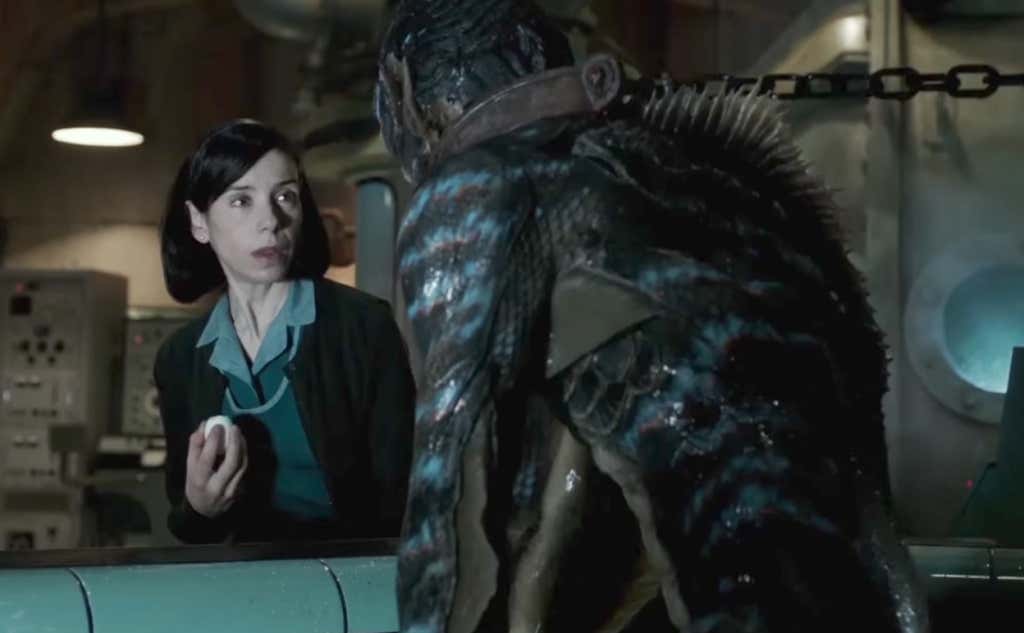 The cast which drive this movie are all phenomenal. Michael Shannon is so hatable from the first second he’s on screen to the last that I’m pretty sure I hate him in real life. Like, I don’t think the he could ever redeem what his character did in this movie for me. Motherfucker is a scumfuck to the highest degree. Richard Jenkins, who you probably know as the dad from Step Brothers, is very charming as the friendly neighbor to Eliza, our main character, and Octavia Spencer is even more charming and endearing as her best friend. Eliza herself, though, I mean, wow. Sally Hawkins gets my vote for the Best Actress at the Oscars this year. She plays a mute, and doesn’t say a single word for two hours and three minutes, yet conveys more raw emotion in her performance than anyone else all year. It was incredible to watch, and nearly brought me to tears multiple times. 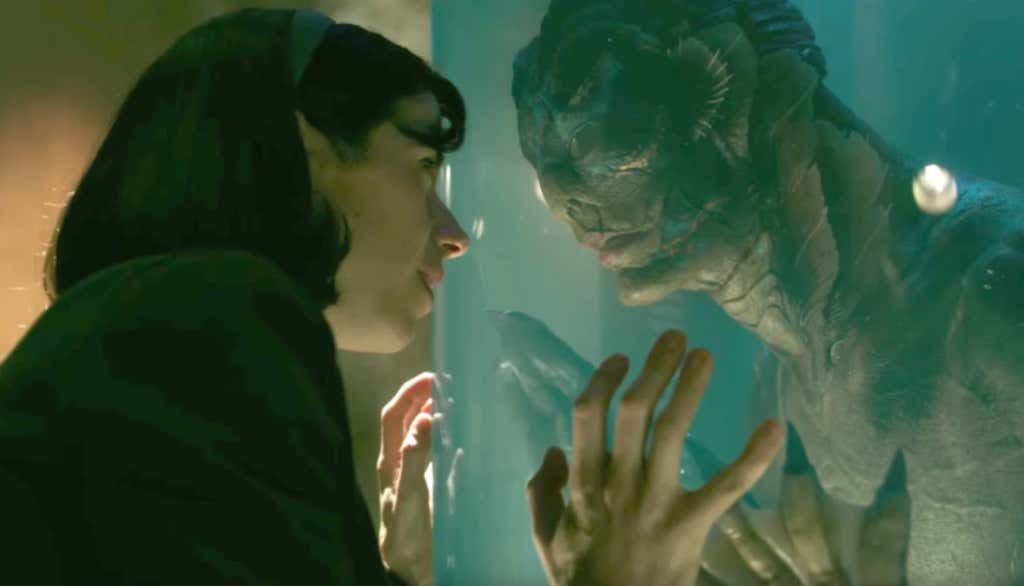 As for the story, ‘The Shape Of Water’ feels like a kids’ movie for adults. Please don’t interpret that as a dig, because it’s not. It’s actually a massive compliment. The surface of the plot has been explored many times before. The government wants a creature for testing, protagonist sees the heart in that creature and makes an attempt to save it. It’s a tale as old as time. Nothing new. Del Toro takes you down different avenues with this, though, so forget everything you know about this specific sub-genre of science fiction. The seemingly predictable attempt to break the creature out of it’s imprisonment isn’t the massive climax at the end of the third act. Instead, it’s placed right smack dab in the middle of the film, which beautifully splits this movie in half and allows for more characters and relationships to develop. 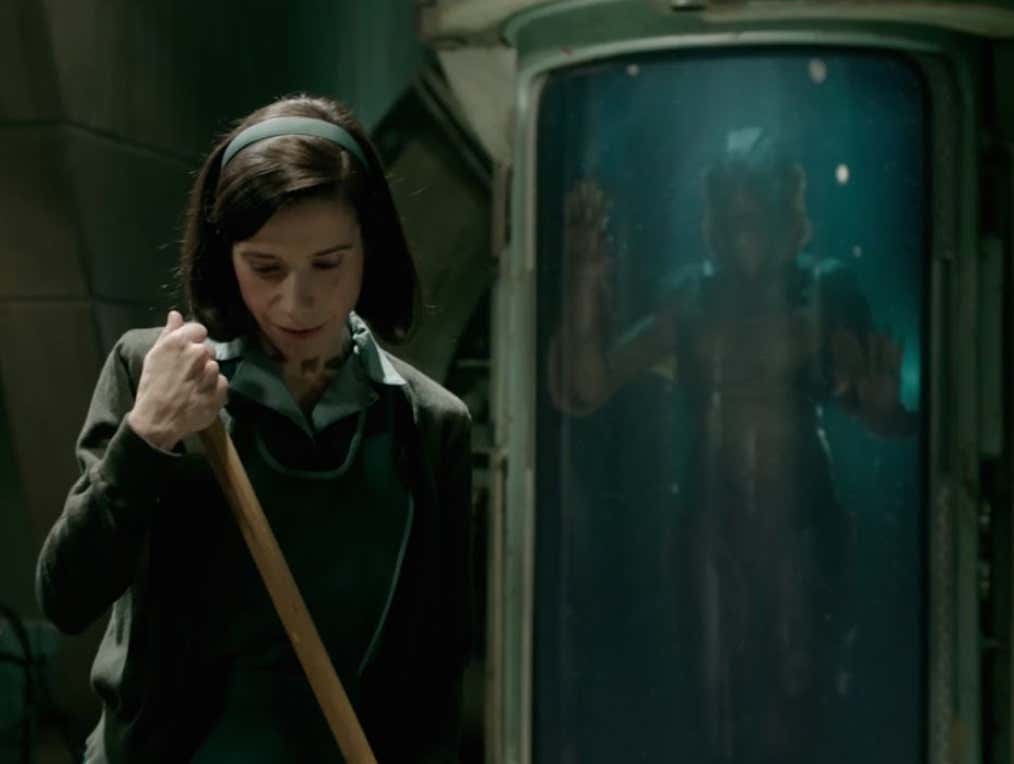 The chemistry between Eliza and everyone she’s on screen with is off the charts, I’m talking literally everyone, but her relationship with the creature (played by Doug Jones) is especially unbelievable. You can feel their tension, and you can feel how different they are around each other, and how much they connect/relate to each other. My only gripe with the film is that they didn’t give this even more time to breathe in the first hour. I wanted to see as much of them together as possible. 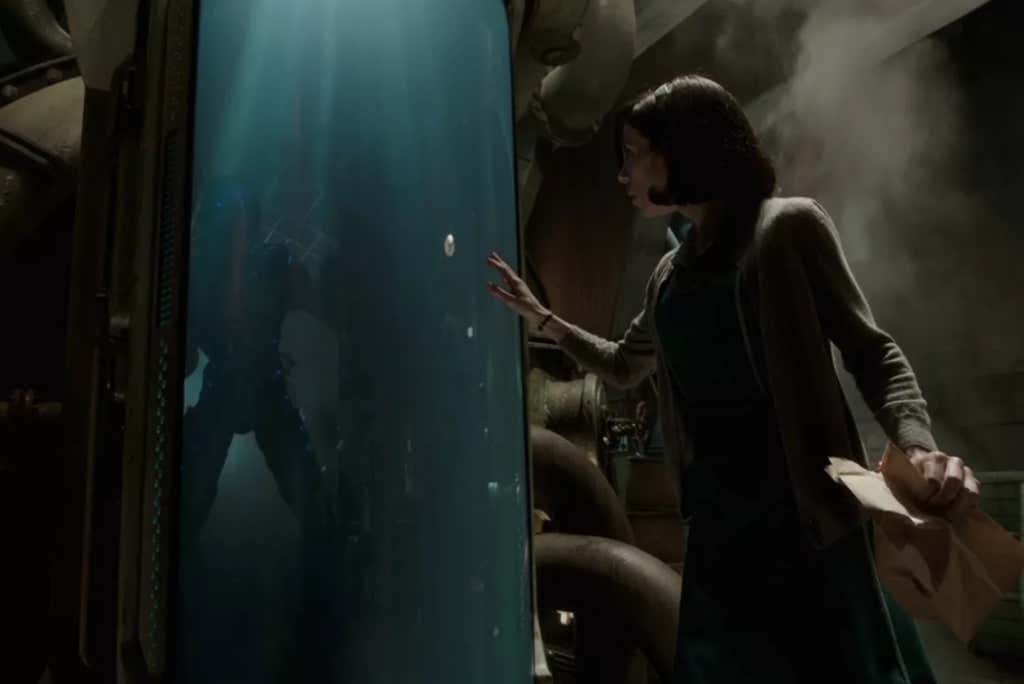 The ending of the movie diverts from any and all cliches you’d expect, and cements the thought I had in my mind for the previous two hours: this movie is going to stick with me for a long time. It’s truly unforgettable. Del Toro took an indie budget and made a grand scale film that’s as heartfelt as heartfelt gets. I don’t want to sound like a broken record, but this movie can be described using one word and one word only: beautiful.

Expect it to win multiple Academy Awards, and expect it to be talked about for a years to come. As long as Star Wars doesn’t cuck all of it’s attention, that is.