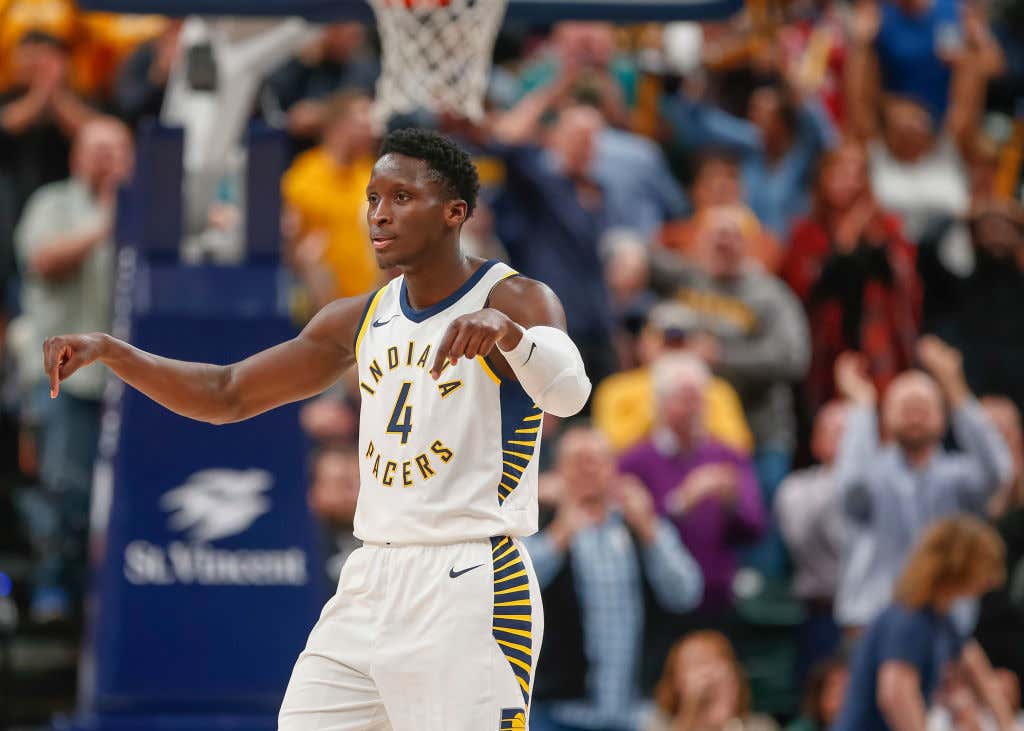 Welcome to another edition of Last Night In The NBA where we catch you up on everything that happened from the night before in the Association. Wednesday night was jam packed with exciting NBA action, with 10 games in all, most of which were close. Love nights like this. If you missed it, I don’t know what you could have possibly been doing that was more entertaining, but in any event, here’s what happened.

Cavs win streak is up to 13, and once again, it required some heroics from Lebron James. The Kings had this game, they HAD it, but in typical Kings fashion, they blew the game with under 2 minutes left to play. To put it simply, there may not be a person on the planet playing better basketball than Lebron right now, and that includes James Harden. He finished with 32/11/9 on 12-18 shooting including 5 made threes. Is CLE crazy for playing him 41 minutes in a game in early December in Year 15? Maybe, but then again Lebron is a fucking alien

Remember when people would say Lebron never hit big shots? I mean I hate the guy but to question his basketball ability might be the most stupid thing we’ve ever done as a society.

Kyle Korver and Jeff Green held it down for the second unit, combining for 32 points on 11-17 shooting and 5-9 from deep. Korver’s shooting especially was key for CLE, because it was his three straight threes to start the fourth that got CLE on top, and then from there, Lebron closed the door.

For SAC, what the hell man. You had one job, and you couldn’t even do that. Shame on you. On the plus side Frank Mason had his best game as a pro, ZBo turned back the block for 18/10/6, and Buddy Hield had 17, but ultimately they learned that scoring 17 points in the fourth quarter against Lebron is not the best strategy

Don’t look now but the Pacers are 7-3 over their last 10 and are starting to play some of their best basketball of the season. They also can thank Victor Oladipo for saving them from what would have been a TERRIBLE loss. Oladipo led all scorers with 27/8/8 on 10-20 shooting, including the game winner

Oladipo did have some help, as all five starters for IND ended the night in double figures

but much like the CLE game, things all came down to their fourth quarter performance which they won 29-13. After scoring just 39 points in the first half, things looked pretty bad and even worse when they didn’t really close the gap in the 3rd quarter. Either way though, a wins a win.

For CHI, againm this is perfect for them. Keep games close for your fans, get good experience and production from your young pieces, but ultimately lose. That is tanking perfection.

An OT thriller in Orlando! Who knew a game between two teams that stink could be so much fun. The Magic’s starters were great in this game, with 94 of the 110 coming from that group. You had Aaron Gordon going for 24/15 on 9-15

Now Fournier did sprain his ankle but X-rays were negative which is good, and this game really should never have been close, but that brutal 29-13 second quarter sort of fucked things up for the Magic. After their hot start the Magic have been inconsistent at best, they haven’t won two games in a row since early November.

For ATL, typical formula. Dennis Schroder scored all the points and took the most shots, he led the team with 26 points on 10-26, and they got some good production from Prince who had 19/6 and then some guy named Tyler Cavanaugh had 13/6 on 5-10 shooting off the bench

You wanna know what’s weird? The Hawks have 5 wins, and 60% of them have come on the road. Outside of John Collins (who didn;’t play), this team is about as unwatchable as it gets.

Full blog is coming, but the Celts have now won 4 in a row, continue to own the best record in the NBA, and they won this game missing two key players. Here’s how Celtics fans feel this morning

Welcome back Porzingis! Anyone surprised that Porzingis returns to the lineup and the Knicks win? Sure it may have been against MEM who is not exactly a world beater, but the Knicks had lost 5 of their last 6, so they needed any win they could get. He finished with 18/5 in 34 minutes, and looked pretty good for not really playing for the past week.

He got some help too from Courtney Lee, who led all scorers with 24 points on 10-17 shooting

For MEM, you started strong, had a nice 32 point first quarter, and then what happened? You barely scored 32 points over the next two quarters. Gasol and Evans were the only starters in double figures, and they went 9-25. Gasol looks MISERABLE on this team, as they haven’t won consecutive games since like the opening week of the season. Brutal times in MEM that’s for sure.

Really one of the only games last night that wasn’t all that close involved GS, who could have guessed! Despite not having Curry, we were reminded that Kevin Durant is still pretty fucking good on his own. He finished with 35/11/10 on 13-28

Klay also had 22 points, and what’s crazy about this game is two other GS starters did not score a point, and took a combined 3 shots. I’m not sure how many teams can have that happen and still win comfortably.

For CHA, it’s not like you didn’t have your moments despite never really challenging in this game. Kemba had 24, Dwight 14/7 and Batum 15/5/4/2. Now nobody else did anything which is probably a big reason why you lost, but there were highlights!

Now this was an important Eastern Conference matchup that will probably come in handy in terms of seeding in just a few months. The Bucks were looking to bounce back after a tough loss to BOS, and to do so would need a big effort from their three best players. Good news, they got it. Giannis/Bledsoe/Middleton combined for 78 of the 104, and on Giannis’ birthday, they got the win.

Bucks are now 9-4 since the Bledsoe trade by the way.

I continue to be impressed with how DET is using Drummond as a passer, his average of 4.0 a night this year is 4x his previous best.

Tobias Harris and Avery combined for 41 points, and they got close right at the end after a Reggie Jackson jumper cut it to 3 real late, but they couldn’t get that one final stop they needed. If you look at the top 4 seeds in the East, you’ll see that DET is the only team below .500 on the road, and the only team under .500 against their own conference.

40/22/4 with 4 blocks on 12-25 from the field and 14-21 from the line, I think it’s safe to say that DEN had some issues containing Cousins. The Pelicans scored over 30 points in each of the first three quarters, an 26 in the fourth so this was one of those good old fashioned Western Conference shootouts. Jrue Holiday also got into the action with 27 points of his own

and guy like Rondo (11/6/7) and Moore (14 points) were solid as well. NO has gone with this 3 point guard lineup with AD out, and it’s sneaky working. The Pelicans have a chance to get a nice little win streak going with SAC/PHI on deck before their date with HOU which hopefully Davis is back for.

For DEN, much of the same with them. They have to play defense, especially with Jokic out. Garry Harris led the way with 24 on 8-19

and things looked great in the first half, but they ran out of gas and ultimately couldn’t keep up the pace of play NO was using. It’s not often a team will go 16-35 from deep, and turn it over just 9 times and still lose. That’s rough.

To put it simply, DEN just flat out sucks on the road. They’re now 3-9 on the season, and ultimately that could be what costs them in terms of a playoff spot in the competitive West.

Rumors are swirling that Kawhi is getting closer to a return, but in the meantime the Spurs are going to just keep on winning without him. They finished with 8 players in double figures, shot with 53/52% splits, and turned it over just 11 times.

It is insane that without having Kawhi this entire season, the Spurs find themselves just 2.5 back of both GS and HOU.

For MIA, Tyler Johnson led with 25

and the Heat came out firing in the first half, shooting 58% and making 9-18 from deep. Then the Spurs put the clamps on, but this was a closer game than the final score indicates. Josh Johnson threw in 19 on 7-10 shooting

and Dion had 22 on 8-12. If you watched this game you saw some pretty beautiful ball movement from the Heat, and seeing as how I am a sucker for good ball movement, I thought I’d share

My god do the Clippers suck. As it stands now, they’ve lost 13 of 16 and those wins came against ATL/SAC/LAL who all suck. Thankfully MIN held on, and that’s impressive because Thibs played a relatively short bench, and no second unit player had more than 21 minutes of action.

As a team they finished with 55% shooting, and no starter had under 16 points. Basically it was a lot of this

For LAC, again, they stink, so the only thing to do when discussing them is to congratulate Lou Williams on his 1,000th 3PM

And that’s it! You’re now all caught up on everything that happened the night before in the NBA. We have 4 games tonight including LAL/PHI and HOU/UTA but if for whatever reason you can’t watch, just check back here tomorrow and I’ll tell ya all about it