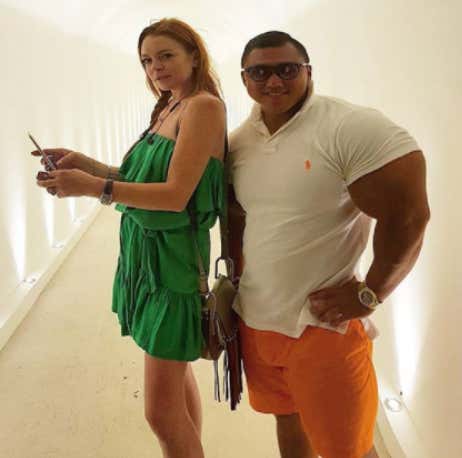 It’s tough to get whackier and crazier than Lindsey Lohan. I don’t give a shit about her cause she’s some crazy whacko now that defends Harvey Weinstein these days. Ever since her Parent Trap days I’ve given less and less, but her new best friend who she’s being hanging with is an absolute MONSTER. Apparently they’ve been in each others insta stories non-stop (probably cause she’s poor as shit and needs a sugar daddy). He goes by the nickname the Korean Hulk and he is just an outrageous human being. His name is Je-yong Ha and God knows how these two’s paths crossed in life, but thank God.

He’s the ninth ranked arm wrestler in the world. He’s 5’4″ at a hilarious 240 pounds and he’s a billionaire it seems. I have no idea how he’s this rich off of fucking arm wrestling, but most Insta pics he posts are in private jets or eating fancy as fuck food. Here he is just completely ignoring ARNOLD. It’s as if Arnold is some fan that snuck his way into the event, just lucky to grab a pic. You don’t disrespect the Terminator like that and expect to survive the evening, unless you’re the Korean Hulk I guess.

I think the winner of the USA-North Korea War will be whoever can get this guy on their side. He’s the X-Factor, I mean just look at these pictures. He puts Dan Blizerian to shame.

Here he is lifting an ATV casually. Yeah no biggie.

Dude is a monster and he needs to be in America ASAP. You mean to tell me we can have 19 Housewives of (Insert a County in California), but we can’t have a camera following this guy around 24/7. Make it happen.