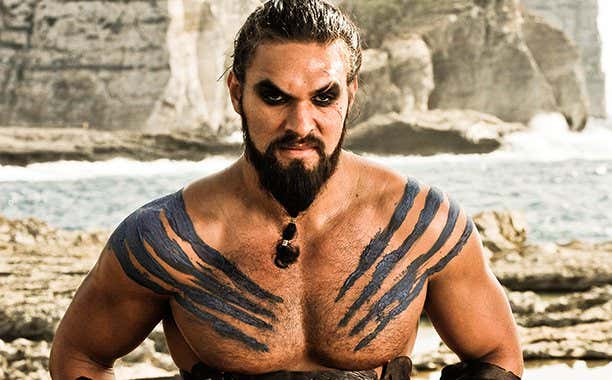 EW- Jason Momoa recently visited the set of Game of Thrones in Belfast to catch up with his former showrunners and castmates. But while the erstwhile Khal Drogo actor was hanging out on set, he also rather accidentally got the lowdown on the ultra top-secret final season. The actor would never reveal any spoilers, of course, but he revealed that he’s extremely enthusiastic about what’s to come.

Hey Khal Drogo, fuuuuuuuckkkkkkkk you pal! This is the last thing myself and the millions of Thrones fans around the planet needed to hear. It’s hard enough that we have, at the very least, 18 more months left until Thrones comes back into our lives. I don’t also need to hear that it’s going to be fucking INCREDIBLE. I need my expectations to be lukewarm at best. Say Season 8 looks “meh” and there is lots of talk about climate change, how fast ravens can fly, and Sam & Gilly banter instead of letting me dream of the possibilities of the greatest thing ever on TV. Cersei pulling the most vicious Cersei moves, the Jaime Lannister Redemption Tour coming to completion, Euron being as much of a badass as the actor promised before last season started, maybe a Cleganebowl or 2, a few Arya faceless murders, Jon Snow actually learning about military strategy, a smattering of dragon vs. dragon warfare, and Bran likely saving the day. #Branwagon

To be honest, I kinda felt like the last season of Thrones could be a bit of a bust just because there are only six episodes to wrap EVERYTHING up and the living fighting the undead army could get old quick. But instead Drogo’s mouth is out here writing checks that Benioff and Weiss’s asses have to cash. Now I’m expecting a Breaking Bad-esque end to Game of Thrones, which is almost impossible to pull off. And even if they don’t, I now have to wait more than a year-and-a-half long to wonder whether or not the season is going to be good. I’d almost rather forget that Game of Thrones even exists until the first teaser drops, which again will likely be more than a year from now. Fuck I hate HBO for making us wait this long and Momoa for promising Season 8 will be the GREATEST THING THAT’S EVER AIRED ON TV. You know how much great shit has aired on TV outside of just awesome Thrones shit and other TV shows? Just every legendary sports game. The 2000 and 20001 Britney Spears VMA performances. Both Bruno Mars Super Bowl Halftime Shows! And a kabillion other things. Aim small, miss small one time for me, Jaybird. The rest of the cast members must feel like the 2011 Eagles did after Vince Young named them the Dream Team, except if Vince Young had been (SEASON 1 SPOILER ALERT) cut seven seasons earlier. Underpromise and overdeliver is the secret to life.

Also I don’t care what the article says about Drogo never coming back.

Momoa wasn’t, as some assumed after the press spotted his presence, somehow reprising his beloved Dothraki character who perished at the end of season 1. “I just showed up to see [producers David Benioff and Dan Weiss] and I just happened to see people on set,” Momoa says. “I haven’t been over there in a long time. You just want to see your friends and you end up make headlines going, ‘Drogo’s back!’ and I’m like, ‘He’s dead! He can’t come back, it wouldn’t work.’”

I heard “When the sun rises in the west and sets in the east. When the seas go dry and mountains blow in the wind like leaves. When your womb quickens again, and you bear a living child. Then he will return, and not before” wayyyyy too many times to not expect all of that somehow to happen and Drogo appearing jacked as fuck on my TV one more time. Yeah it’s a longshot, but that’s my Bitcoin Bold Prediction of Season 8 (Bitcoin doesn’t sponsor me, but I feel like if I mention them in the blog enough, maybe somebody at Bitcoin will pay me one).