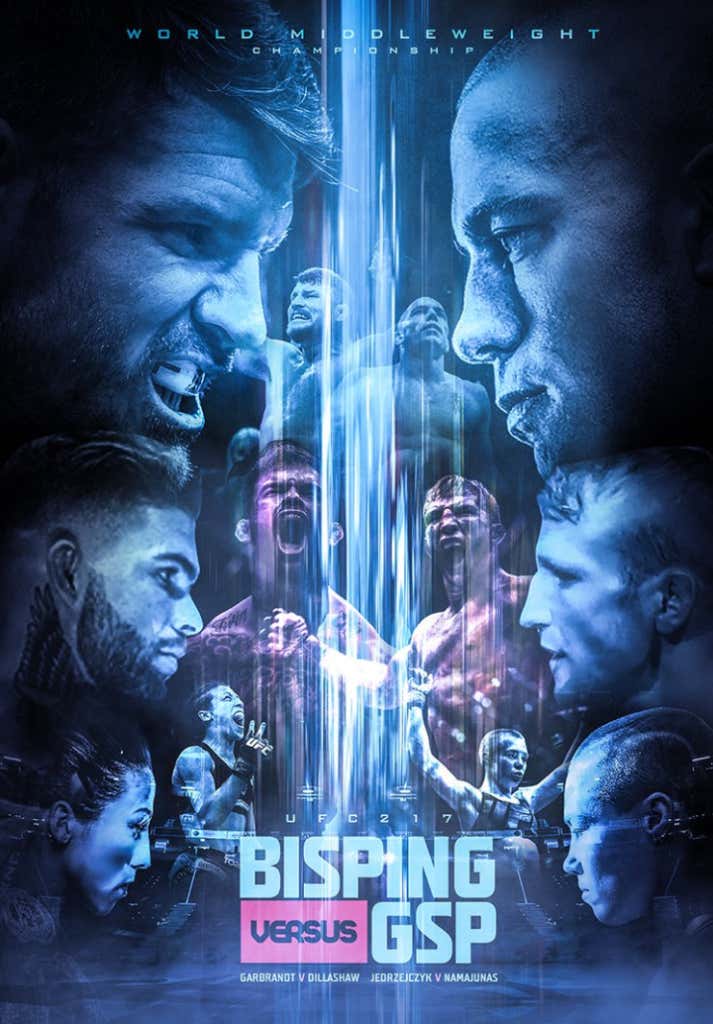 My headline says a lot. It’s a bold statement. I get that. I’m telling you right now that I used no hyperbole, however. Tonight at Madison Square Garden, right in the heart of New York City, history was made. One of the most shocking MMA wins of all time happened, a grudge match years in the making came to a head, and a legend returned to the octagon after four years away and reclaimed his spot at the top of the mountain. Three title fights. Three new champions.

Trent and I arrived at The Garden early, as I wanted to catch as many fights as possible in our awesome seats courtesy of Reebok, and Trent had never really seen a UFC event before so I had to make sure he was acclimated to the sport before our three championship bouts. 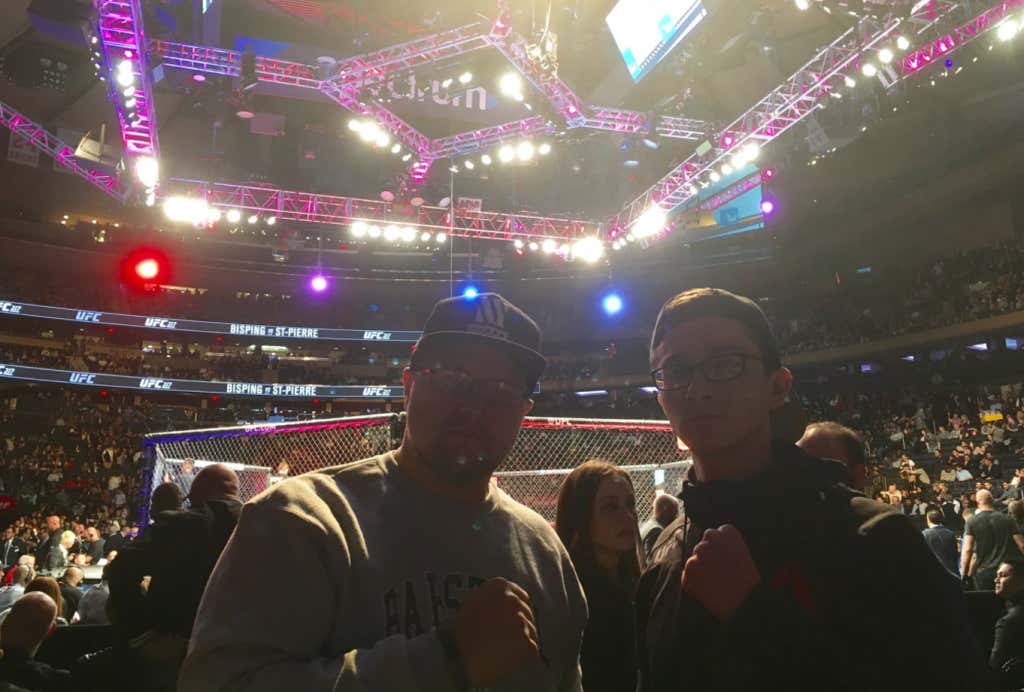 Right away, the night was kicked off (this is a great joke, just wait one sec) right with Ovince Saint Preux’s knockout of Corey Anderson on the FS1 prelims:

(See I said kicked off, because it was a head kick – okay forget it let’s just get back to the blog)

There were a few strange fights on the prelims, one ending in DQ, one almost ending in DQ before instant replay, but all of them were entertaining, really. No stinkers. The main card would continue that trend…

Johny Hendricks vs Paulo Costa was the first fight on the pay per view portion of UFC 217, and it went down pretty much how we all expected, I think. Paulo was the bigger, better, faster fighter, and although Bigg Rigg landed a few clean shots that looked like they had weight behind them, Costa was never in any real trouble. He TKO’d Hendricks in the second, possibly ending his UFC career. I was happy to see him get out of there without getting REALLY brutally KO’d, and think it’s definitely time to retire. If he decides the same, hats off to a great career.

Up next, Stephen Thompson faced off against Jorge Masvidal, and Wonderboy completely outclassed him. For three straight rounds, Thompson worked at a perfect range, didn’t allow Masvidal to get into his pocket, and barely got hit. His footwork was impeccable and it was a pleasure to watch. Nothing else to say about this one, congratulations to Stephen Thompson.

Here’s where the night went from great…to legendary.

This week, I wrote the following about the Women’s Strawweight Championship fight…

If Rose somehow, someway, pulls off the upset, though, man. That’d probably be the story of the night no matter WHAT happens in the other two title fights.

Now the other two title fights tonight were both fantastic, but I wasn’t too far off the mark…

I’ve been to Rangers playoff games at Madison Square Garden, I’ve been to Linsanity-Era Knicks games, sold out concerts, packed wrestling shows, you name it, I’ve seen it at MSG. Trent was a little taken aback when I knew my burger, fries, and large Coke would be $23.50 before I even ordered, but that’s how familiar with the Mecca I am. Have that in mind to understand the magnitude of this statement: I have NEVER heard the World’s Most Famous Arena as loud as it got for Rose Namajunas’ knockout of Joanna Jedrzejczyk. Ever.

There was something about the entire build to this fight, how Joanna was dealing with it, and how Rose was dealing with it, that put that feeling in your stomach. The one your brain suppresses and goes, “Oh don’t be fucking ridiculous!”. The one that tells you, maaaaaaybe things aren’t gonna be as predictable as you think. You can believe me or you cannot believe me, but I had the same feeling pre-McGregor/Diaz I, Rockhold/Bisping II, and Rousey/Holm. I told Trent before Round 1 started that I really adored both fighters, but I’d love to be there for an all time upset, and an all time upset was what we got.

I was in such shock from the first knockdown that when the second knockdown (which wound up being the knockOUT) happened, I think I blacked out. I jumped onto my chair (no idea how I didn’t fall and break my neck), hugged Trent who was also going nuts, hugged the old woman sitting by herself next to me, my hat was falling off, shit was coming out of my pockets, it was a mess. MSG was a MADHOUSE. Popcorn flying from every direction. I’m STILL in disbelief. Just goes to show you, nobody and I mean nobody in this sport is unbeatable.

If the night ended right then and there, I’d be going home a happy fan. If you ordered it on pay per view, you probably felt like you already got your money’s worth. Then, two more fights took place, both of which were fight of the year contenders.

Cody Garbrandt and TJ Dillashaw finally got into a cage to settle their beef, and while this awesome fight had a spectacular finish, I doubt we’ve seen the last of this rivalry.

The first round was very back and forth. TJ was landing more technical shots, and Cody landing the more powerful shots, and right before the horn sounded (ending the round), this happened:

Saved by the bell! TJ came out on a mission in Round 2, dropping Garbrandt with a head kick just as the pro-No Love crowd chanted “Fuck you TJ!”, but Cody recovered and we were back to a stand up battle. The champ played some mind games as he did with Dominick Cruz, dancin’ all over Dillashaw…

…but uh, maybe karma struck because of it.

TJ Dillashaw has recaptured the UFC Bantamweight Championship he believes he never lost almost two years after being dethroned. Immediately after Garbrandt came to his senses, TJ got in his face and let out one final war cry, giving us this incredible shot: 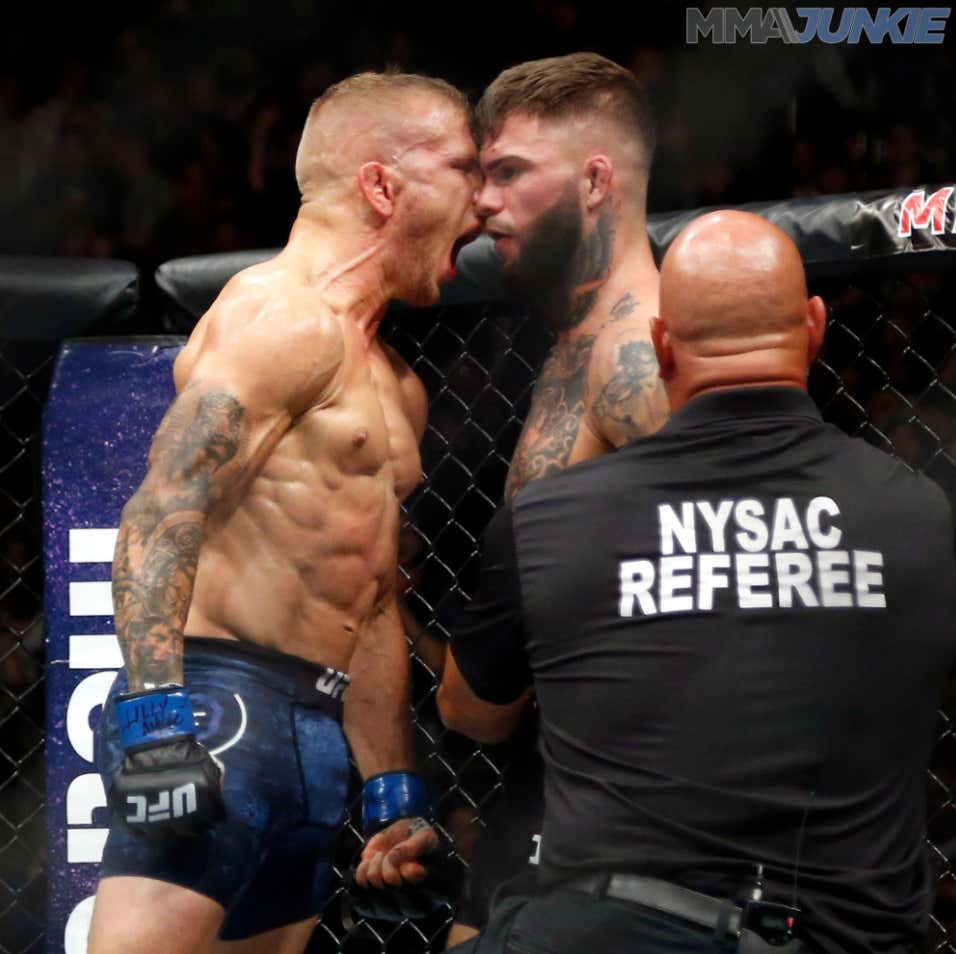 Dillashaw’s brother wouldn’t stop screaming at Cody after the fight, and they almost got into it, but he was quickly escorted off the premises. Again feeling like the night was fantastic and had already done enough to overdeliver, I was hit with the realization we STILL hadn’t gotten to the main event!

The place was buzzing, but not yet out of energy, and when Georges St-Pierre made his walk to the octagon for the first time in four years (sans-gi and headband, weird), I got that warm “big fight feel” feeling in my heart.

Folks, I love the violence.

Michael Bisping entered the arena on a mission, walking so fast and so intimidatingly that his team couldn’t even keep up, and Bruce Buffer said those beautiful two words: IIIIIIIIIIIIIT’S…TIME!

St-Pierre looked phenomenal in the first round, landing jab after jab after jab, putting Bisping on wobbly legs, and finishing a signature takedown as a cherry on top of his first five minutes back in the UFC. No ring rust at all for the former Welterweight Champ. In the second, he slowed a bit and started getting tagged, and slightly hurt. The crowd rallied behind him, and chanted “G-S-P!” multiple times, but a takedown for Georges would lead to some nasty elbows and punches from Bisping on the bottom, splitting GSP’s face open and giving him a gnarly crimson mask to wear. Evened up after two, the third round’s momentum was all with the champ…until St-Pierre landed a devastating left hook and sunk in a DEEP rear naked choke:

Remember when I said Rose Namajunas KOing Joanna Jedrzejczyk was the loudest I’ve ever heard The Garden? This may have that beat. There was a roar when the knockdown occurred, that followed into the ground and pound, but when that choke was applied, things fell silent. Everyone knew the fight was over, we were all just waiting for Big John McCarthy to step in and make it official. Bisping went to sleep, Georges let go of the choke, and the roof was blown off the arena. Once again, Trent and I were hugging, jumping up and down, absolutely blown away by what we had just seen. Georges St-Pierre is back.

In their post fight interviews and press conferences, all three defeated former champions dealt with their losses professionally and with class, setting a great example for future leaders in mixed martial arts.

Overall, I think this will go down as the greatest night in the UFC’s history when you look at the card from top to bottom. 217 has officially dethroned 189 (McGregor/Mendes and Lawler/MacDonald II) as my favorite fight card of all time, due in part to getting to be so close to the action with one of my best friends and watching him fall in love with the sport:

Oh, and he met someone named Action Bronson:

I don’t know if that’s a big deal or not but he was excited. I walked past Adriana Lima and was more excited by that. I’ll tell you this about seeing her in person, from someone who saw her in person, she’s a very attractive female.

I had the time of my life tonight. Long live the barbaric human cockfighting.