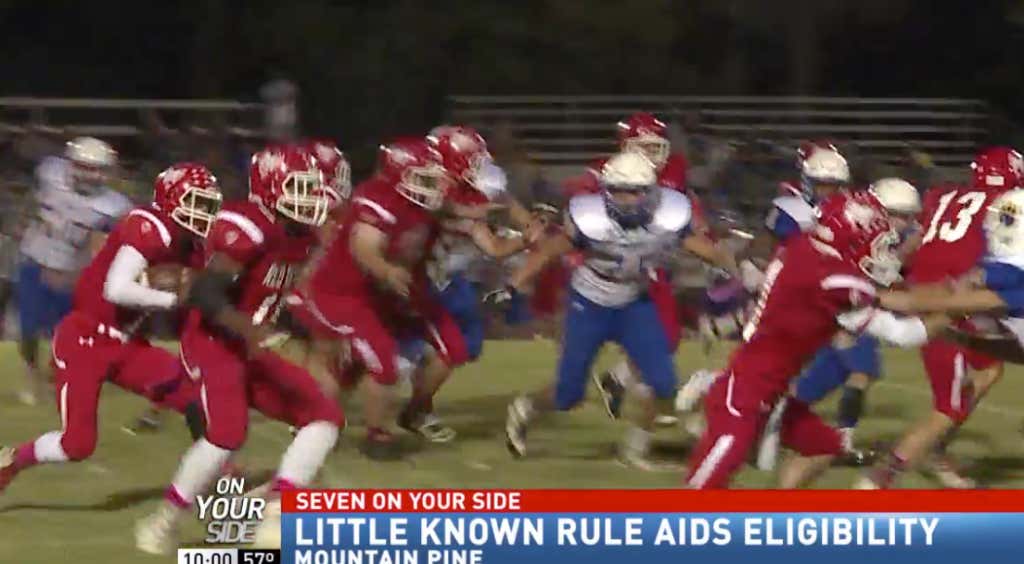 KATV – Mountain Pine hasn’t made the state football playoffs since 2010. The Red Devils won a total of three games over the past six seasons.

This year the team is riding a seven-game winning streak — fueled by a rule used only a few times over the past 40 years.

After a winless season last year, Mountain Pine opened this season with a 35-0 loss to Jessieville. But the next week the Red Devils won. Then in week three, the team won again. Mountain Pine is now 7-1 and heading for the playoffs.

So, what changed between week one and week two?

It’s a widely known fact that some of my favorite stories to blog about involve doing whatever it takes to play sports. The old man bus drivers who find college admission loopholes to play on the team, the imposters who lie about their age to get one more shot at glory.

Now we’ve got a kid in the sticks of Arkansas getting married to live in a school district and be eligible to play immediately for the team.  Literally putting a ring on a girl’s finger, going to the courthouse, and getting legally hitched as a 17 year old just to play some high school football.  I LOVE that.  THAT is what we talk about when we talk about dedication.  THAT is what’s going at the top of this kid’s scouting chart when it comes time to discuss the NFL.

Mountain Pine has several good players, but this player has rushed for over 100 yards in every game. He has scored 16 touchdowns in those seven victories.

He was a transfer student initially ruled ineligible by the Arkansas Activities Association.

He gained eligibility thanks to a little-known and seldom-used exception: He got married to a student in the district and moved in with her parents.

“We’re in the participation business,” says Lance Taylor, executive director of the Arkansas Activities Association. “So, we try to get kids eligible as long as they meet the rules that all students have to meet in our state.”

The student is never named but I’m assuming it’s Dafavioun Haywood, considering he’s the starting running back on Mountain Pine and is averaging 153 yards a game, according to Max Preps.

Incredible.  Hilarious.  This team wins 3 games in 6 seasons, goes completely winless last year, and opens this season getting shut out 35-0 – then has a kid GET MARRIED and goes literally undefeated after that.

Rule 16, Subsection A, Exception 6 states that if a “… student is married and living with a spouse … who had an established domicile in the district one year prior to the marriage …” then he or she is instantly eligible.

A week later, Applegate provided the AAA with a marriage certificate with the names of two 17-year-old students on it. Applegate also provided an email from the bride’s father confirming that the teens had married “due to a certain circumstances.”

The student in question played in the second game of the season and the Red Devils haven’t lost since.

God I love football in the South.