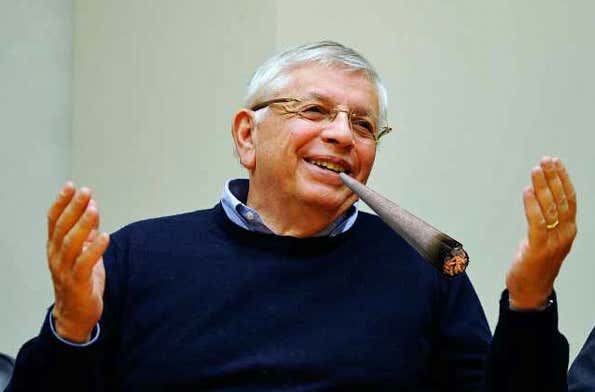 A long video for sure, but really interesting to watch. Stern continues to be one of my favortite commissioners mostly because he gives no fucks. He’ll cheat, he’ll rig Drafts, he’ll schedule certain refs to officiate certain games when the wants a playoff series to keep going, all good stuff. Well now, look at how hip and cool he is! David Stern, huuuuge weed guy.

In all seriousness, it’s hard to argue his stance. With what we know now about cannabis and its medical benefits, it’s crazy that the NBA and really all professional sports teams don’t make it legal. Between CBDs, oils, creams, etc there are so many options that athletes can explore as an alternative form of treatment so they don’t end up on pain killers.

I also found it very interesting to hear Stern talk about how basically when he was the commissioner, he knew players were getting high all the time, even in some cases showing up to games high, and they had to do something about it (heavy odds on it being a Jail Blazer). It was also funny to hear Al Harrington try and explain CBDs to Stern, that was basically every old person ever. He is all of our grandparents. They also touched on something I didn’t really think about, and that’s the issue of players who live in states where it’s recreationally legal. That’s kind of shitty that theoretically you could do something that is legal where you live, but would violate the CBA. That doesn’t seem fair. How many other things are legal in states that would have this same issue? Very confusing!

This is obviously a very complicated issue with no clearcut easy answer, but we’re at a time where discussions are starting to take place and progress is being made. Will it be hard for leagues to monitor recreational use if they made it OK for medical purposes? Of course. But it also wouldn’t shock me if a league like the NBA, one that is so much more progressive than any of the other Big 4 sports was the first to figure it out.

Wonder if Stern is more of a sativa or indica guy.