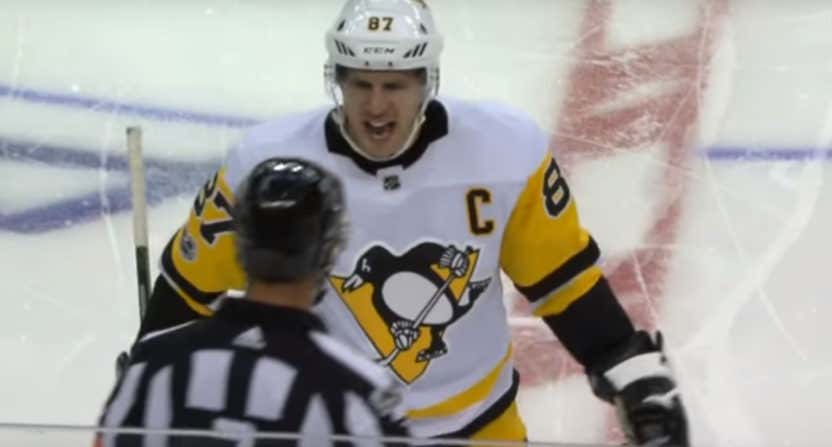 So the other night, Sidney Crosby took a penalty in the first minute of the Penguins game against Tampa Bay. 40 seconds later, Nikita Kucherov scored his 9th goal of the season. Crosby, upset that his lack of control cost the Penguins a goal against, decided to then take out his frustration on the ref which then led to a 10-minute misconduct for “Abuse of an Official”.

Rule 39 in the NHL rulebook clearly states “A player, goalkeeper, Coach or non-playing person shall not challenge or dispute the rulings of an official before, during or after a game. A player, goalkeeper, Coach or non-playing person shall not display unsportsmanlike conduct including, but not limited to, obscene, profane or abusive language or gestures, comments of a personal nature intended to degrade an official, or persist in disputing a ruling after being told to stop or after being penalized for such behavior. ” After watching that video and reading the rulebook, you can see that Sidney Crosby earned every single one of those 10 minutes in the box.

But I’m here to say that a 10-minute misconduct is not enough. Not even close. Because what we’re seeing here is Sidney Crosby falling down a very slippery slope. This isn’t just a guy losing his cool after a questionable call. This is Sidney Crosby developing a God Complex and truly believing that he is infallible. After winning back-to-back Stanley Cups, Sidney Crosby believes that he is above the law. That he can do whatever he pleases with reckless abandon just because he is Sidney Crosby. It starts out with abusing an official but what comes next after that?  I honestly don’t even want to know. Men who believe they are a god are as dangerous as they come. Which is why the NHL needs to take control of this right away and suspend Sidney Crosby until further notice. You put a man like that on the ice and everybody else immediately becomes at risk. The only way to make this complex go away is to assure that the Penguins will not win their 3rd Stanley Cup in a row. If it takes suspending Crosby for the rest of the season to make that happen, then I believe it’s in everybody’s best interest to go that route. Always better safe than sorry.

P.S. – Speaking of Pittsburgh Penguins being scumbags, get a load of Penguins fan Jed over here.

Nothing like defacing a statue dedicated to a man who did incredible work for inner-city youths in Philadelphia and was a cancer victim. Classic!