Okay that was a bit of an extreme reaction to the news of the Mets hiring a first-time manager as their new skipper. But I was just scared they were somehow going to fuck this hiring up during what could be the last few years all these pitchers are together. Like if the Mets SOMEHOW hired Dusty Baker, who has killed more arms in his career than Ray Ramirez, I wouldn’t have even batted an eyelash.

But instead, the Mets hired Mickey Callaway, who was the Indians pitching coach. I like Callaway for a few reasons. One, the Indians led the league in ERA this season with a bunch of young pitchers and Corey Kluber blossomed as one of the best hurlers in all of baseball after Callaway was hired. If the Mets want to even dream of another October run, they need all those young pitchers to pitch like the studs they were before injuries ran through the Mets clubhouse like gonorrhea in Cancun during Spring Break. After years of staying inside the franchise, the Wilpons finally looked outside the organization for their new manager. Multiple Indians fans reached out on Twitter and said how much they liked Callaway, which is nice and doesn’t always happen with people the Mets sign.

Quotes like this from a respected voice are obviously a great look.

As well as quotes from anonymous Cleveland execs.

The answer to that question is usually “Because the Mets are the Mets”. The fact they didn’t fuck this up is reason enough for celebration. There is nothing not to like about this hire.

Wait, what is that you say?

He is the first former pitcher to manage the Mets since Dallas Green.

I also like the Callaway is young. We’ve had an old manager here for years. I don’t mind having a younger, rugged, if we are being honest pretty damn handsome/sexy guy that could have been the Marlboro Man or Wrangler spokesman bringing out the lineup card 162 times a year. 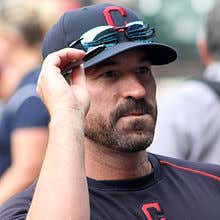 Plus the name Mickey Callaway could be the name of a great baseball manager or a scrappy boxer from the 1920s that became the featherweight champion of the world before he succumbed to polio. Nothing beats a baseball manager with a good name.

Not sure if Kevin Long will stay with the team after being passed over or what Callaway’s staff will look like. And while I love Joe McEwing and Robin Ventura, it is nice to know that we will be able to remember the good times with them instead of calling for their jobs whenever things went south.