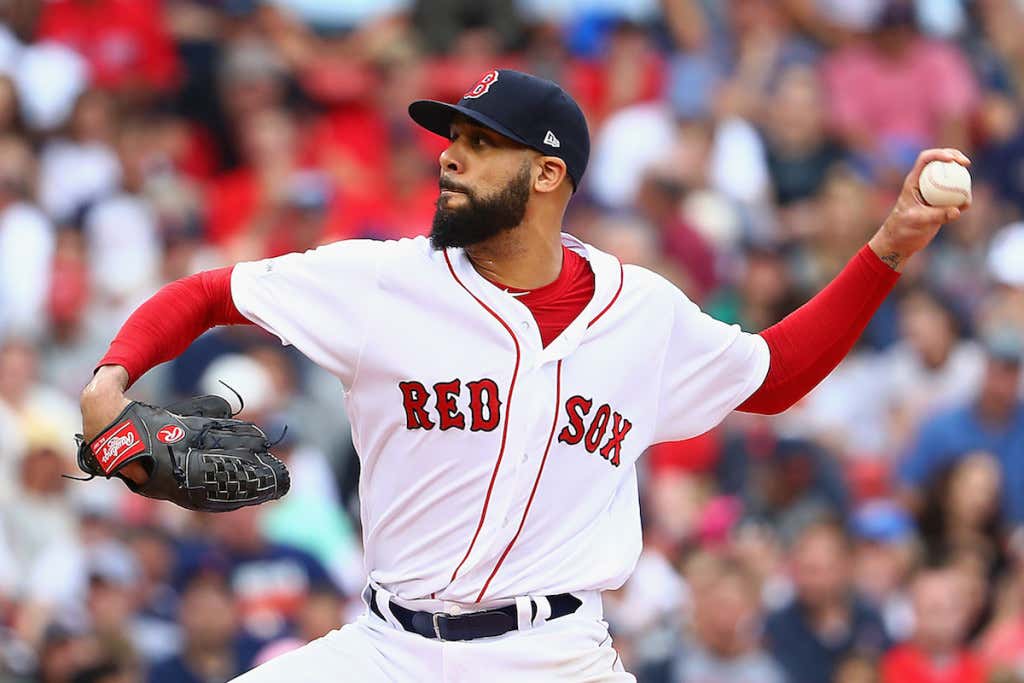 We see this all the time, right? We saw it last year, actually. A team shows up in the postseason, seemingly unprepared and evidently overwhelmed. They fall behind 0-2, and before they even knew what hit them, their season is over. After suffering two ass-beatings in Houston, it looked like the Red Sox were on the verge of being swept for the second consecutive year in the Division Series. But not this year.

At the start of the game, though, the mood was…well, let’s just say it wasn’t good. Barstool HQ was not a positive environment to be in with the Red Sox down two games to none.

In a game that was started by Doug Fister, which should’ve been started by David Price, it went about exactly as most had expected it to. After the Game 1 loss, I wrote that the Red Sox absolutely should’ve started Price in Game 3, even more so if they found themselves down 0-2 headed back to Fenway Park. He was their best option, and I’m not even really sure how that could be disputed. Yeah, Fister has postseason experience and good numbers in October, but his numbers at Fenway Park this year as a starter weren’t very good (4.67 ERA in 9 starts) and the more recent numbers should mean more than what he did in 2014 or before that.

Sure enough, the Red Sox found themselves down 0-2 heading into Game 3 on Sunday, and Fister not so surprisingly did not deliver, lasting just an inning and a third, allowing three earned runs on four hits, setting the stage for Price to take over after Joe Kelly had thrown an inning and two thirds scoreless.

And once Price came in, it was all over. Price threw four shutout innings in relief, striking out four and walking one. In the postseason, Price has thrown six and two thirds scoreless innings with six strikeouts, and if you go back to his most recent return from the disabled list, that’s fifteen and a third scoreless innings out of the bullpen with 19 strikeouts. And if you’re one of those “Wow, so the Red Sox paid $217 million for a middle reliever?” people, then you’re simply misguided.

Red Sox starters have given you absolutely nothing in the postseason, and you’d be fucked without Price picking up the pieces and keeping this team in games by getting crucial outs. Put it this way — Red Sox starters are collectively averaging 2.2 innings per start this postseason, and Price has averaged 3.1 innings per appearance out of the bullpen this postseason. Quite simply, he’s impacted this series more than any other pitcher that the Red Sox have, which isn’t saying much, but it’d be ridiculous to even attempt to demean his importance.

“I’ll fuck every woman you’ve ever loved” is the most classic Tex line ever, by the way.

As much as I’d like to go on and on about Price, because he deserves all of the praise after coming back not just once but twice from an injury that almost had him on an operating table, to then be able to not just contribute, but to do it in the postseason, the place where he had failed so often throughout his career and taken a heap of shit for it in the process — it was the Red Sox bats that won this game. You can go right down the line, really. Everybody in the starting lineup had at least one hit, except for Xander Bogaerts who shouldn’t be leading off anymore, but that’s an argument for another day. Mitch Moreland had himself a three-hit day, Leon had a couple hits, Devers had a couple hits, and Jackie Bradley Jr. hit a three-run homer in the seventh inning to put the game out of reach.

But there’s one guy who deserves a ton of props, and that would be Hanley Ramirez. Before Game 3, this tweet made the rounds, and I’ve gotta be honest — it fucking enraged me.

My initial reaction was, you want US to be ready to go? How about YOU fucking get ready to go for once. Not just Hanley specifically, but the entire team. Coming into Game 3 on Sunday, the Red Sox hadn’t held a lead in a postseason game since the first inning of Game 1 of the Division Series LAST YEAR, and you want US to be ready? Ballsy request. But I mean, I’ll be damned if Hanley didn’t back up exactly what he said, because he went 4-for-4 with three runs batted in, two runs scored, and was without a doubt the biggest spark plug in that Red Sox lineup on Sunday. And it was so desperately needed, and will continue to be if the Red Sox plan on coming back in this series.

So, now what? We finally got something to cheer about — that was nice — but this team wasn’t constructed to win one postseason game and call it a successful year. That’s not the goal. Or at least, it shouldn’t be. That might’ve been the expectation given that the Astros are clearly the better team, but the better team doesn’t always win, especially in a five-game series. Game 4 is scheduled to be played today at 1:08pm with the Yankees having fought off elimination last night in the Bronx.

Rick Porcello, last year’s Cy Young award winner, who pitched like anything but that this season, will oppose Houston’s Charlie Morton. One of two things can happen here — either the weather holds up and Porcello will, in fact, get the ball in Game 4, OR…the weather prevents this game from being played, and you can bring back Chris Sale to start Game 4 at Fenway Park on normal rest. Break out your best rain dance, folks, because Boston’s best chance of winning this series is if the game gets rained out today, and you get Sale back on normal rest.

Not only is Sale obviously the better pitcher, but Porcello pitched significantly worse at Fenway Park this year than he did on the road. That’s a 5.43 ERA at home this year compared to a 3.67 on the road. Come to think of it, I don’t want Porcello starting Game 4 regardless. I’d rather have Sale on short rest in Game 4 and everybody going in Game 5 than to roll the dice with Porcello in Game 4 if the weather holds up.

John Farrell’s already made his decision, though. It’s Porcello today if the weather allows it, and that shouldn’t have anybody feeling too great given the numbers, but the leash is going to be mighty short with the season on the line. Price was asked about his availability after throwing four innings on Sunday, and he said that he’d feel “fine tomorrow”. Tomorrow as in today, of course. I just think that you’re playing with fire if you keep going to the well with Price for multiple innings as they have been. Sooner or later, a Red Sox starter is going to have to sack up and give this team some innings. Whether or not that’s going to be Porcello remains to be seen, but seems unlikely.

Either way — and this is kind of setting the bar low here — it was nice to see that this team didn’t roll over and die like it appeared they were going to. Heads were going to roll, and they still might, had the Red Sox been dismissed from postseason play without having a LEAD, never mind a win. With their season hanging in the balance, this team fought back and returned the favor to the Astros who had embarrassed them in Houston not once, but twice. However, momentum, as they say, is only as good as your next day’s starter. Rick, you’re up.

PS — That’s not a Dodgers shirt, that’s a Tulsa Drillers shirt. They were really nice and sent me a package with some shirts and peanut M&M’s because Big Cat eats mine every day.