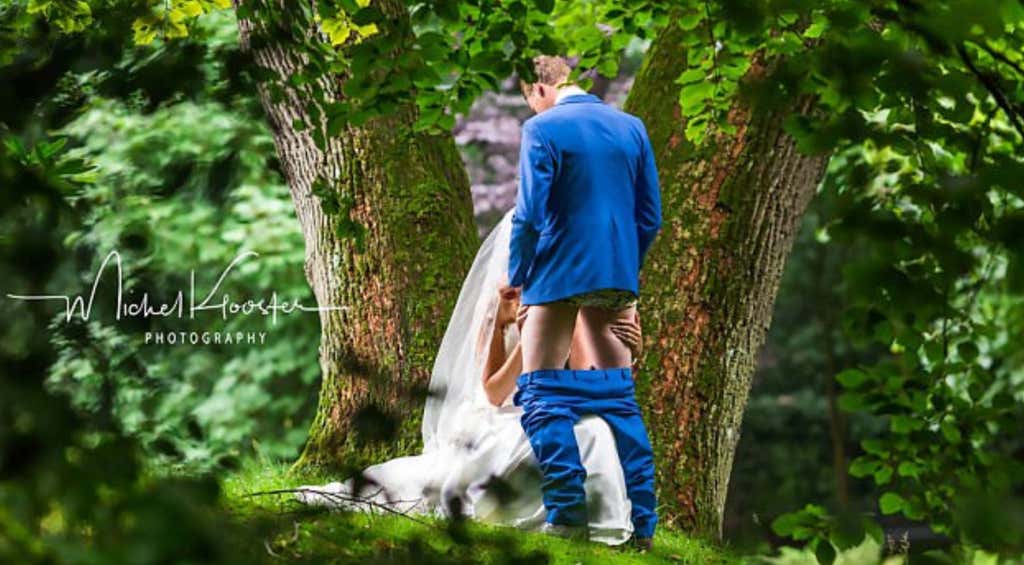 Daily Mail - At first glance, this wedding photo of a newly-married couple seems to show the pair lacking both patience and fear of discovery.

The image of the Dutch couple was posted online by the photographer, and was soon shared by thousands.

The caption at the picture read: ‘Some newlyweds cannot wait for the party to be over so they can quietly retreat to their suite for a smashing wedding night.

‘Luckily they already exchanged their wedding vows and they were officially married.’

…However, the scene was completely innocent, and was posed by the newlyweds as a joke.

I think we can all agree that wedding photos are stale.  Boring.  Always the same thing.  A smiling bride and a smiling groom standing in some beautiful, idyllic setting, arm in arm, staring at each other lovingly.  Sure sometimes they get a little silly for an Instagram but it’s more or less all the same bullshit.  You spend your hour getting the shots, pay the photographer and stick the prints in a photo album that gathers dust on the shelf for 20 years until you pull it out one day to show your kids that mom and dad actually used to like each other.

But not these two.  They want their pics to represent who they really are.  To show everyone that they’re not washed up and calling it quits on excitement.  Just because they’ve got rings on and impending mortgage payments doesn’t mean there’s not still a spark.  A name on a passport and tax filing statuses being changed doesn’t mean they’re done getting blown next to a tree in the forest.  First date, girlfriend, fiancee, wife, makes no difference – still dicks getting sucked.  Love that, keep the flame alive.

Love the photographer too.

In fact, the staged photograph was suggested to the couple by one of their mothers, photographer Michel Klooster said.

‘Anyone who thinks this is offensive, still lives in the year 1996 according to my opinion. Of all the pictures taken, there is one that is playful, which in ten years is still fantastic to talk about.

‘Give these people their joy. That is also something I wish to you. Life is already prudish enough.’

That left hand on the back of the thigh, that’s enthusiasm that will disappear in 2-3 years no matter how in love you are.