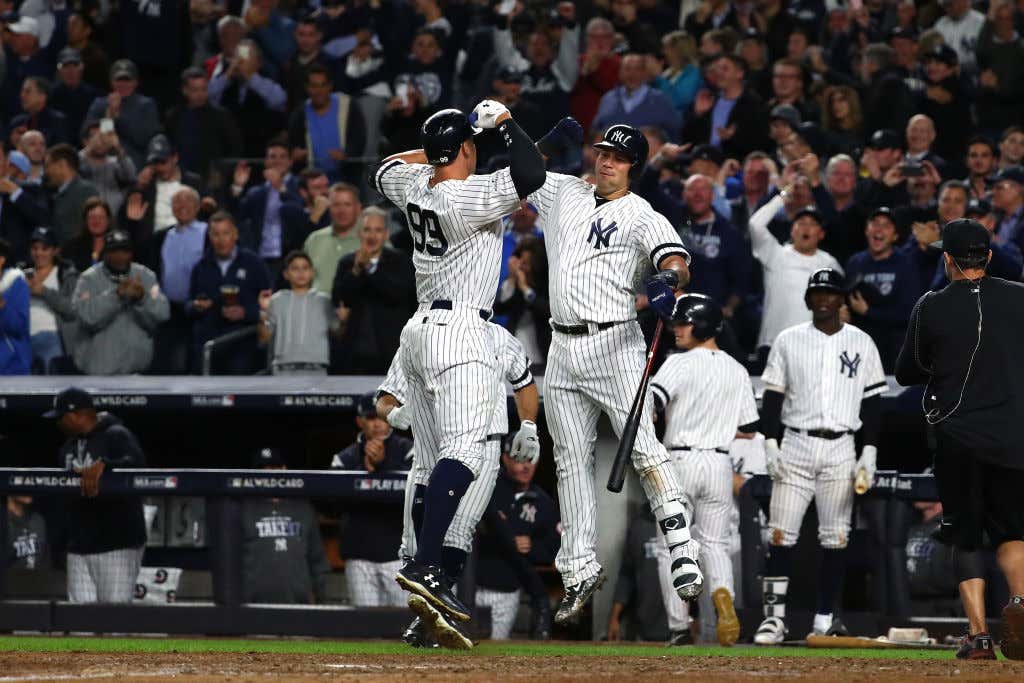 You stupid fucking idiot. Why didn’t you go home to your crying kids? You lit a fire under a person that has more wins than you ever can imagine. You thought Severino’s rocky start was gonna doom us? Coming from a miserable fuck who celebrated like he won the goddamn World Series because his own trainer got fired…

You thought three runs was enough to dig my goddamn grave? Not a fucking chance. Was it brutal to see Severino give up two homers in the first inning, putting the Yankees in a 3-0 hole? We’ll let the video tell that story.

I’m not gonna lie it wasn’t the best feeling. I didn’t feel my heart beat for a little bit. In fact I couldn’t breathe. Luis Severino, who was expected to go somewhat deep in this game, couldn’t last longer than a single out. Worst case scenario. Yes, that was problematic, but thank God Chad Green was able to limit the damage to three runs in the first inning. Having to come into the game with 2nd and 3rd with one man out, and able to get out of the 1st inning with just a three run deficit was HUGE. This game will probably be credited to David Robertson in the the grand scheme of the things, but Chad Green was marvelous when it mattered most.

Brett Gardner led off the bottom of the first inning with a walk to start the comeback. Aaron Judge followed with a lengthy at bat, fighting off some tough pitches, resulting in a tough bloop single to really get things going. After Gary Sanchez made out that brought up the ever-so-clutch Didi Gregorious. This man needs to get PAID this winter.

It was GAME FUCKING ON from there. Brett Gardner came up in the second inning and blasted a booming go-ahead solo shot to give the Yanks the lead. Later in the 3rd the Twins managed to tie the game at three on a ground ball. Greg Bird answered right back with a base hit of his own, giving the Yanks a 5-4 advantage. In a tight ball game in the bottom of the 4th, Aaron Judge (the AL MVP) stepped to the dish and decided to make his mark on this game.

Who said he wasn’t clutch? Please come out of you’re goddamn hole and tell me this guy doesn’t have the clutch gene. Yeah, all his homers come when it’s 10-0 right? Kick rocks you bums. The homer couldn’t have come at a better time as it gave New York a 7-4 lead at the time. Those were all the runs this team would need.

From there on the combination of Robertson, Kahnle, and Chapman shut the door on this game. The backbone of this team is the bullpen and it showed up tonight. From the start, Chad Green entered in full crisis mode and limited the damage completely. David Robertson came into the game in the 3rd inning. The THIRD INNING for David Robertson. He was nothing short of magnificent, going a career high 3.1 IP with five strikeouts, allowing just three hits. Tommy Kahnle followed suit with 2.1 IP of perfect baseball. Kahnle, the prized acquisition from Chicago, was lights out tonight. When it came to the ninth, Aroldis Chapman struck out the side and helped the Yankees move on to the ALDS.

Celebrate all you goddamn want. Pop that champagne all you please. This team earned every fucking cent of what they’ve earned so far. I’m not going to lie, after the first inning, things weren’t looking too high and mighty. I had Carrabis, Feits, and KFC laughing in my face, but did I crack? Nope, it was all a massive prank from Severino again against the Twins. You think he’s doing that against the Indians? No way Jose.

Now we must shift gears to the ALDS. With the day off on Wednesday the Yanks will travel to Believeland (the city of misery) where Sonny Gray will pitch one of the biggest games of his life against Trevor Bauer. Will good old Trev be able to avoid another drone accident and not JPP his own hand? That remains to be seen, but I guarantee you Sonny Gray will be ready to rock as the Yanks set course for the ALCS. This has been a magical, wild ride and I hope it never fucking ends.