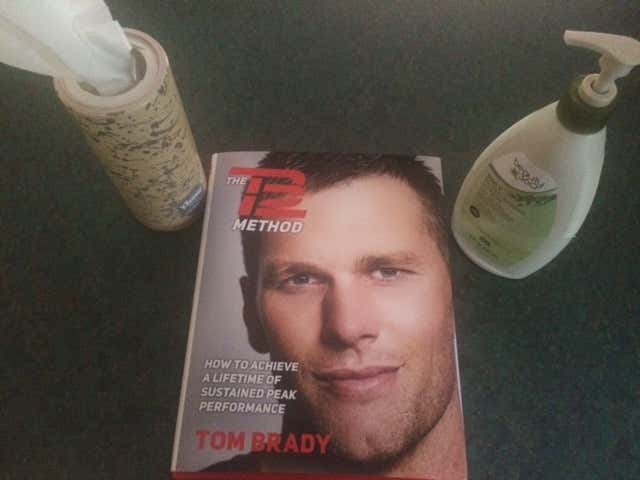 Do a search on Amazon of books available under the category Health, Fitness and Diet, and you get over 800,000 results. A number that enormous naturally includes everything from cook books to exercise guides, titles ranging from Make Your Bed to You are a Badass and How to Not Give a Fuck, and authors from a wide assortment of fields including (but not limited to) psychologists, nutritionists, celebrities and some people who’s qualification seems to be they have a laptop.

So it shouldn’t shock anybody that one of the most successful and physically gifted people in America is getting in on that action. Tom Brady has made his fitness and diet regimen into more than his lifestyle; it’s his side business. Probably the thing that will be his post football career, if he ever happens to stop playing football. And The TB12 Method: How to Achieve a Lifetime of Sustained Peak Performance just replaced Hillary Clinton’s book as the number one best seller in the country.

Two things set this book apart. One is that Brady’s diet and exercise plan are his and Alex Guerrero’s alone. The other is that, to my knowledge, his is the only book out of those 800,000-plus self-help titles that’s been put under the microscope, analyzed, questioned and ridiculed by outlets like the NY Times:

Mr. Brady attributes much of his unusually long N.F.L. career and the relatively little playing time he has lost to injuries to this kind of gnomic self-talk and his muscular pliability. But most of us are not pliable, he tells us, and our workouts are not helping. …

The problem with this notion is that exercise science has never heard of muscle pliability.

“It’s balderdash,” says Stuart Phillips, a professor at McMaster University in Hamilton, Ontario, and an expert in muscle physiology. …

Mr. Brady and Mr. Guerrero have not conducted or published clinical trials of muscle pliability. Neither has anyone else. …

The book’s sections on diet and nutrition similarly lack supporting evidence, although not common sense. Mr. Brady writes that, like him, we should avoid sugary foods and other processed carbohydrates. The TB12 Method advocates for a plant-based, locally sourced, organic diet.

It also, however, strays into the eccentric when it suggests that we eschew foods in the nightshade family, including tomatoes, strawberries, eggplants and potatoes, focus on foods high in alkalinity. …

Mainstream nutritional science, meanwhile, is fine with tomatoes and does not support alkaline diets.

Let’s be clear: I have absolutely no issue with anyone putting a self-help book under scrutiny. I go by the old hack joke that if you need a book on helping yourself, it sort of defeats the purpose. What I find hilarious though is that the Times and other media outlets are in such a fucking feeding frenzy over this particular book.

Famous, successful, attractive people write these sorts of things all the time and have been doing it for decades. I just don’t remember the media getting their panties in a bunch fact-checking Oprah books or Kirstie Alley’s How to Lose Your Ass and Regain Your Life or How to be Famous: Our Guide to Looking the Part, Playing the Press and Becoming a Tabloid Fixture by Heidi Montag and Spencer Pratt looking for harmful advice.

Brady happens to be an age-defying, transcendent athlete doing things never done before by a man of his age. And who looks better, moves better and is performing as well as he ever has. So he wrote a book sharing his ideas and methods. Make of that what you will. I have a copy of TB12 Method, and as always any diet advice that begins by telling me I should eliminate coffee, booze and carbs from my life is a non-starter. We’ll all be worm food some day and I want to go to the grave with a smile. To me, a life without caffeine, beer and pizza is not a life worth living.

Which is my personal decision. We’re all adults here. Blessed with free will. I’m all about healthy skepticism, but we can pick and choose what suits us without being treated like children that Tom Brady’s methods are somehow going to be bad for us. I mean, it’s not like he’s published TB12’s Healthier Living Through Gin, Chewing Tobacco and Pork Rinds. he spends the entire book interjecting little caveats like “This works for me” and “I prefer it this way.” Besides, it is filled with common sense, fundamental principles and workouts that guys I’ve talked to swear by.

And his results speak for themselves. It’s working for him. But that’s not about to stop the press from putting Brady in their cross hairs for it, in ways they never did during the Atkins craze when fat guys at my old day job were horking down a pound of deli meats and cheese and calling that “lunch.”

Again, I’m going to keep living my boozy, nightshaded, resistance band-free lifestyle, because that’s my choice. People can make up their own mind about adopting Brady’s training. But the problem the media is having with The TB12 Method is not the message, it’s the messenger.