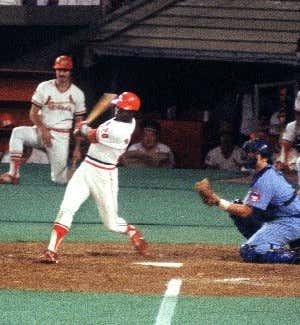 Lou Brock of the St. Louis Cardinals playing in his final season, adds another milestone to his Hall of Fame career as he collects his 3,000th hit off his career against Dennis Lamp of the Chicago Cubs at Busch Stadium. Brock would finish his 19-year career with 3,023 hits and a solid .293 average while setting the all-time stolen base record at 938.

Born to a family of sharecroppers in Arkansas on June 19, 1939. Brock first became interested in baseball after Jackie Robinson made his debut and grew up a fan of the Brooklyn Dodgers. He first caught the eyes of scouts while leading Southern to NAIA championship which led to him playing in the Pan-American Games in 1959. A short time later he signed to play with the Chicago Cubs.

Lou Brock made his debut with the Chicago Cubs at the end of the 1961 season, he showed great speed and promise over the next three seasons with the Cubs. However, the Cubs expected more and grew impatient with his development. In parts of four seasons, Brock hit .257 with 20 home runs, 86 RBI and 50 stolen bases. Looking for more pitching the Cubs traded Lou Brock to the St. Louis Cardinals with Paul Toth and Jack Spring for Ernie Broglio, Doug Clemens, and Bobby Shantz. Broglio the key player in the trade who went 18-8 with a 2.99 ERA in 1962 and 21-9 with a 2.74 ERA in 1960 struggled in Chicago. In three seasons with the Cubs, Ernie Broglio went 7-19 with a 5.40 ERA.

The addition of Lou Brock is just what the Cardinals needed. In sixth place at the time of the trade on June 15, 1964, the Cardinals turned things around and eventually won their first pennant in 18 years and beat the New York Yankees in the World Series. Brock was key to the Red Birds charge in 103 games with the Cardinals, he hit .348 with 12 home runs, 44 RBI, and 33 stolen bases. The Cardinals would reach the World Series in three of Lou Brock’s first five seasons in St. Louis, winning twice.

Lou Brock seemed to age like fine wine, getting better the older he was. His best season was in 1974 at the age of 35. That year he set the single season record for stolen bases with 118. It was the only time in his career he stole over 100 bases in a single season. It was also the eighth time in nine seasons Brock led the National League in steals. Lou Brock finished second in MVP voting in 1974, hitting .306 with three home runs, 48 RBI and 105 runs scored in the leadoff position. In 1977, Brock set the modern-day record with career stolen bases 898 steals. A year later he passed Billy Hamilton’s all-time record of 914 steals.

After struggling in 1978, Lou Brock’s final season was one to remember as he hit .304 and was named Comeback Player of the Year and was named an All-Star for the sixth time in his career. Brock finished his career with a .293 average, 149 homers, 900 RBI, 1,610 runs scored while stealing 938 bases. Lou Brock would make the Hall of Fame on the first ballot in 1985. His stolen base record would stand until 1991 when it was topped by Rickey Henderson. Brock’s 938 steals remains second on the all-time list and most among National Leaguers.