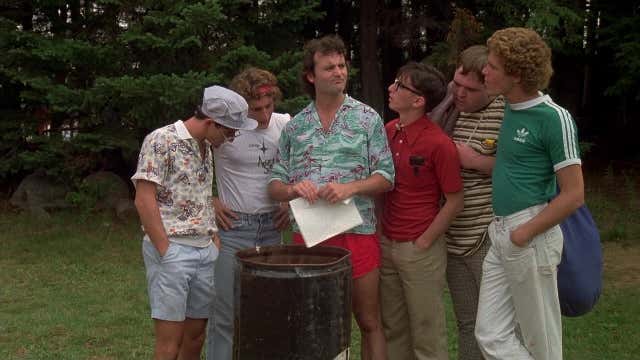 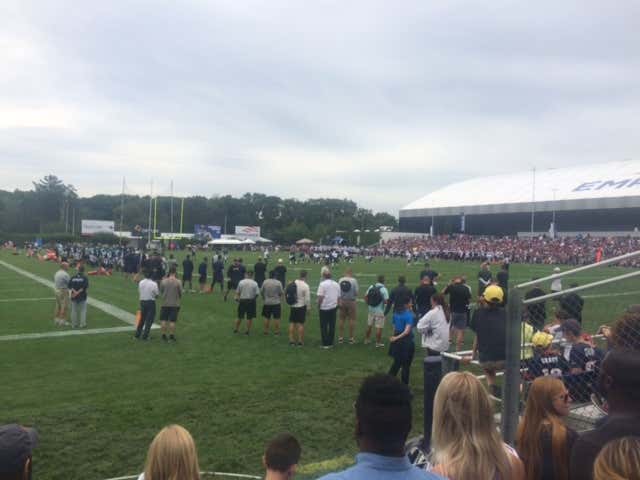 Today marked the start of intermural practices in Patriots training camp. Which, if you’ve studied up on your grossly overrated late 70s screwball comdies, you’ll know what I mean when I say Jacksonville is playing the Camp North Star to their Camp Mohawk. In the past they’ve scheduled these much later in camp, both to give another level of evaluation for the coaches but also as a way to slap the boredom out of everyone that inevitably comes out of drilling against the same group of guys every single day. The fact that we’re only up to the 8th practice and they’re already bringing in the campers from the other side of the lake tells us the coaching staff finds value in these. Even if they’re only going up against the Jags.

A few random thoughts from the media tent:

–While it’s still relatively early, we’ve hit that point in camp where guys whose names you figured you’d never need to know until they’re the customer service rep greeting you at the Apple Store in a month start to get noticed. The early leader in that category is D-lineman Adam Butler, the UDFA out of Vanderbilt. He’s 6-5, 300 lb and seems to be giving them that interior penetration they’d hoped to get out of Dominque Easley. This morning in 1-on-1 drills, Butler blew right past a Jags lineman with a quick-twitch swim move like something out of a coach’s wet dream. I’m getting more convinced that Kony Ealy could be this year’s Terrance Knighton veteran cut. And Butler could be the reason. You heard it here first.

–Another name you can add is Deatrich Wise Jr., the DE who was their third pick out of Arkansas, who just seems to have come out of the box more fully assembled than their first pick, Derrick Rivers. Wise is getting some reps with the first team at a position that all of a sudden seems like it could be their thinnest spot.

–Tom Coughlin was wandering around on the field and hanging around just beyond the orbit of some of the Jags’ huddles. And even strolling casually around in cargo shorts and a Panama hat, he still haunts my every waking moment. Seeing him around Gillette is like watching Voldemort on the grounds of Hogwarts at the end of Deathly Hallows. And no amount of banners will ever make me forget what he did to me.

–One thing that jumps out at you when you’ve got two franchises working out separately on adjacent fields is the way the Pats do things just one step further with one more layer of detail. The Jaguars are doing regular calisthenics, the Patriots have their skill position guys running high-knees over pads while an assistant pokes them with a big padded American Gladiators weapon. Both teams are practicing field goals, and Belichick is personally standing behind the kicker barking orders. Toward the end of the workout, the Jags are running sprints while the Patriots are heading down to the lower field to run the hill they call Dante’s Inferno. It’s like the way the Amish bowl 15 frames, because 10 frames are for Quakers.

–Then there was this:

… And beyond that obscene grab, it is hard not to fixate on Brandin Cooks. He’s caught as many balls from Brady as anyone in camp. At one point he put on a turbo boost to get to a ball on the goal line and just missed making the diving fingertip grab. Brady did get picked by Doran Grant on a forced ball intended for Cooks in 11-on-11s. Then immediately followed it up with two TDs in a row on those throws where the ball comes out so fast you know he knew exactly where his mismatch was prior to the snap. But the early returns are that Cooks looks like one of those guys that gets the chemistry going with Brady from the jump.

–The leader in the clubhouse for Manufactured Outrage of the Regular Season should be Stephon Gilmore as gunner on the kick coverage unit. Assuming he’s still doing it by Week One and wasn’t say, just filling in for Matthew Slater who’s banged up, the O/U on how much talk Boston radio will squeeze out of Belichick’s “arrogance” for putting a $65 million corner on kickoffs is 100 hours.

–I’m looking forward to hearing which Jaguars player Belichick singles out for praise at his presser in the morning. Because that’s typically the guy he ends up signing for a below market deal next year. Nobody does bread crumbing of veterans like he does.

–A couple of words about the Jaguars. The reports of Leonard Fournette’s size were not exaggerated. I’d hate to pay property tax on his ass. And A.J. Bouye was a nice signing by them. He did get beat on a nice back shoulder throw by Brady to Chris Hogan, but even in solo coverage drills where they receiver has the whole field and the DB has no shot, he’s always right there mirroring his man.

–I keep hearing that Jacoby Brissette has this long wind up that has to be corrected if he’s ever going to make it in this system. I hear it, but I don’t see it. He, Brady and Jimmy G took turns chucking 40 yard passes into the corner of the end zone and his delivery was every bit as quick and his spirals tighter that Garoppolo’s. I can’t wait to see him get significant reps in Thursday nights’ preseason game.

–There’s nothing like a little media-on-media crime to make life worth living. Right in the middle of practice, some old timer sat himself down on a concrete block right in front of a bunch of reporters. He’s asked if he could move because he’s blocking the view. He says there is no place to sit. Someone shows him three empty seats. He says “Yeah, well when you’ve been on the beat for 44 years, then you can sit where you want. He then waits a full minute before getting up and moving, while still bitching that nobody had any business telling him what to do. Granted, I prefer my media beefs to be fought with broken bottles and trash can lids, but if this is the kind of petty shit they pull on each other, I’ll come more often. You leave the high school cafeteria, but it never leaves you.