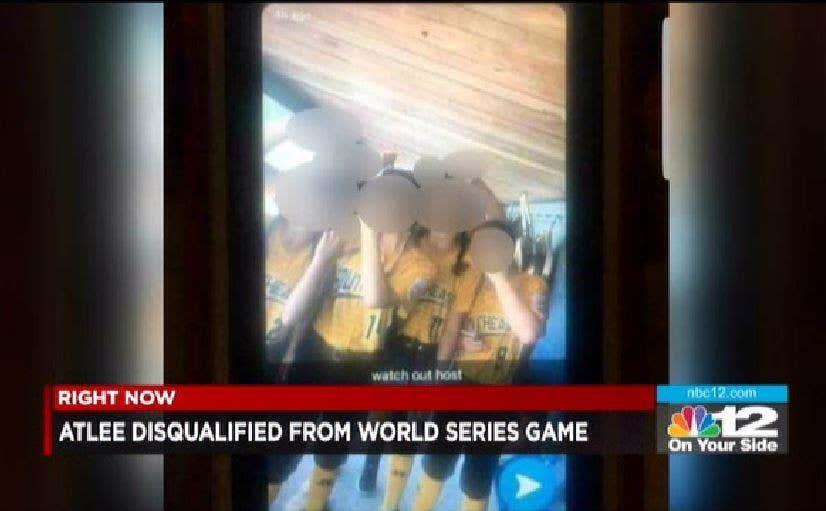 “It’s a travesty for these girls,” said Currie. “Yes, they screwed up, but I don’t think the punishment fit the crime.”

Chris Mardigian, coach for the Atlee team, suggested that the move was retaliation, as the girls were responding to some hostilities in their game against Kirkland. During last week’s game, a Kirkland player and coach were ejected at various parts of the game for their conduct.

Can we stop with the finger blurring? It’s a finger, not a dead body.

So, the gist of this story is that one softball team won a game, took to Snapchat and flicked the losing team off in a post. Who cares? This is the problem with youth league softball nowadays. In my day, we wouldn’t take a Snapchat to get revenge for our coach. You were getting an underhanded heater right in your kitchen. Talkin bout shots to the ribs, folks. Softball isn’t a game of softballs. We were coming hard and correct. You better believe that.

We have to get past the point of thinking that every form of taunting is going to cause mass casualties. A softball team flicked another team off. So what. You don’t want your team getting flicked off and embarrassed? How about learning how to turn a 5-4-3 double play with ease so that you can kill a rally that’s forming. It’s that simple. Don’t like getting flicked off after a loss? Don’t lose. When my daughters win in sports, I want them peacocking their asses off. Strutting around like

And if they happen to flick someone off in the process, so be it.

PS: Sorry for saying puss puss in the lede. That was problematic. Unfortunately, there’s nothing that can be done.