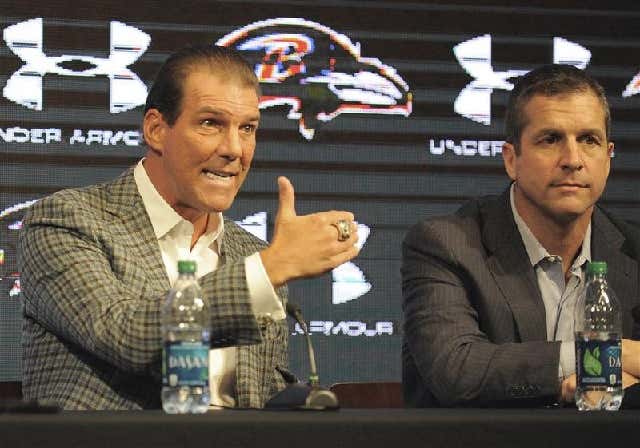 Baltimore Ravens camp isn’t even a week old. And already their situation has a stench of desperation that no amount of courtesy flushing can alleviate. Most of it coming from their quarterback depth chart, which consists of a banged up Joe Flacco, Ryan Mallett and the one they call Dustin Vaughn. And like the crime families of Gotham, Ravens’ ownership, in their desperation, are turning to a man they don’t fully understand: Colin Kaepernick.

At least they’re thinking about it. But one of the most bizarre moves in the long and glorious history of building football rosters, they’re doing opinion polling. Owner Steve Biscotti met with Ravens fans for a Q&A and this actually happened:
A fan asked Bisciotti about whether he was hurting his team’s “brand” by signing Kaepernick, who drew polarizing reactions across the country with his protest during the national anthem before games last season.

“We’ve very sensitive to it and we’re monitoring it, and we’re still, as [General Manager] Ozzie [Newsome] said, scrimmaging it,” Bisciotti said. “So pray for us.” …

“I don’t like the way he did it. Personally, I kind of liked it a lot when he went from sitting to kneeling. I don’t know, I’m Catholic, we spend a lot of time kneeling.”

The Ravens have gauged public opinion on signing Kaepernick, and they’ve found a very split response. …

“I hope we do what is best for the team and balance that with what’s best for the fans. Your opinions matter to us, and we couldn’t get a consensus on it in [this room] either.”

First of all, Bisciotti is completely off the reservation on this one. The whole NFL has spent the off-season trying to spin lies about how no one wants to sign Kaepernick because he’s a terrible QB or a vegan or because he wants too much money. He’s the first executive to break ranks and admit it’s because Kaepernick is a fever dream public relations nightmare that no backup/fill-in QB is worth. I’d say Bisciotti should expect a call from the Commissioner on this one. But you don’t get angry calls from an underling you take out to August National. Membership has its privileges.

Second, what the actual fuck is up with an NFL team asking fans’ to sign off on adding a guy to the roster? The Ravens are making personnel moves based on focus groups now?

This has to be a first, right? I mean, when they were building the 2000 and 2012 Super Bowl champs, I don’t remember them doing opinion polls like they’re launching a new Dorito flavor:

– “Would you say your opinion of Ray Lewis hiding a blood-splattered suit during a double homicide investigation is Favorable, Unfavorable or No Opinion?”
–“Now that Terrell Suggs dragged his girlfriend from a moving car and threatened her and their infant son with a gallon of bleach and faced zero discipline from the team, would this make you More Likely to buy a Ravens No. 55 jersey, Less Likely, or No Opinion?”
–“The Ravens marched Ray Rice’s fiancee in front of a press conference and forced her to read a written apology for getting her skull bashed in on an elevator. Do you Approve, Disapprove, or No Opinion?”

It’s a bizarre place to suddenly draw a moral line on the ground. Especially hen you’ve spent the better part of two decades enabling wife beaters and building statues to guys who plead guilty to obstructing justice in murder cases.

Kapernick is guilty of nothing more than being a below average pro QB with extreme political views. He’s not a monster like these other Ravens. And I say this as a guy who gets a splitting rage headache if some guy at Fenway forgets to take his hat off during the Anthem. But if my football team wants to sign a guy because they think he can help, the last thing I want them to do is take surveys. Like the old saying goes, if you start listening to fans’ opinions, pretty soon you’re going to find yourself sitting with them.