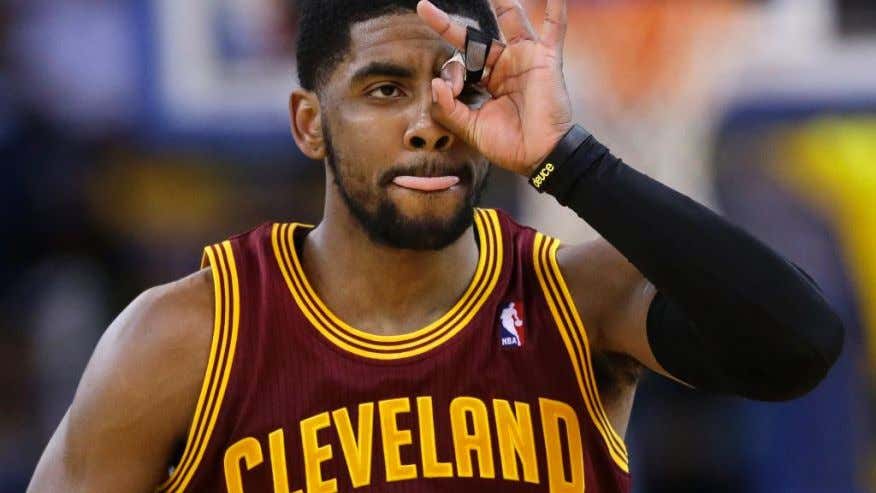 It’s arguably been the slowest news week in sports this past week. So why not open up a mailbag addressing issues and question across all three levels of the game. There hasn’t been a major signing yet this week, recruiting is in its last week of the July live period with games going on out in Vegas – I highly suggest checking out the finals of The Eight today at 5 as the Oakland Soldiers (won the Peach Jam) are trying to win this too. The other thing with The Eight is all eight teams had an NBA player associated with the program as an assistant coach. Aaron Gordon is the assistant for Oakland Soldiers and Victor Oladipo is the assistant for Team Takeover. Both played for the respective AAU programs. So we’ll get right into it as there’s obviously a ton to talk about as we inch closer to overseas trips for college teams and training camp starting for the NBA.

Perhaps the biggest debate going on right now is Kyrie. To me he’s rarely accurately talked about as people either way underrate him or way overrate him. There never seems to be a happy medium. To answer this question, though, I’m going to say no. He’s not a top-5 point guard heading into this year. I have him at 8 taking Russ, Steph, Harden, Chris Paul, John Wall, Damian Lillard and Mike Conley over him. I slide Kyrie in right after them, but I’m willing to listen to the Lillard/Conley/Kyrie order. Now, that’s obviously a different conversation when you bring up starting teams, who would you rather have, etc. Kyrie is under team control for a few years and is still young, but that’s not how I’m taking this question. There’s no doubt Kyrie is one of the best layup makers in the league and can score but he is still a defensive liability.

This is a great question simply because I absolutely love Milos and how good this rookie class is. I don’t think he finishes top-5 though simply because of the depth this rookie class has. There are going to be a ton of guys who step in and play right away. Most other years, I’d say yes to this as Teodosic is essentially a veteran coming over to play. I think when you look at Simmons/Fultz, Dennis Smith, De’Aaron Fox, Josh Jackson, Malik Monk and Donovan Mitchell they’ll simply have more opportunity to play and put up stats. This is why I’d bet against Jayson Tatum being in the top-5 rookie voting, he’s in a logjam with Boston and we’ve seen Stevens shy away from going gung ho on rookies. That’s also the case with Doc Rivers. He’s notorious for not letting rookies play as much as they should and even though Milos is 30 and really damn good, you wonder if he’ll defer to Austin Rivers and Pat Beverly. Regardless, Teodosic is a top-5 League Pass type player.

Give him three years. This year is going to be a rebuilding year as he tries to figure out the roster and see where he needs to recruit. Next year he’ll begin to build his roster, but with coaches coming into a place where it needs help, you need to give him three years. Holtmann is an unbelievable coach and will be successful at Ohio State, but I think you see a losing record this year, hover around .500 next year and then be a bubble team in year three. We saw him go to Butler as an interim head coach, win the job and turn Butler into one of the more consistent programs in America. Think about what he can do at an even bigger school at Ohio State, where there has been success. It’s not like Ohio State has been irrelevant for years as they were a Final Four in 2012, the No. 1 overall seed in 2011 and made a title game in 2007.

It’s always a difficult question to judge ‘overlooked’ or ‘overrated’ type teams, because it’s all subjective. To me the one team that isn’t getting enough praise is Seton Hall. Yes, I’ve seen them ranked, but not nearly high enough. They return Angel Delgado (who was just as effective as Caleb Swanigan, a consensus All-American, in double doubles last year), Desi Rodriguez and Khadeen Carrington. They are a legit top-15 team and can push Villanova to win the Big East. Another team that isn’t getting enough love is USC. They are currently 33/1 to win the national title, which is great value. They are a top-10 team, possibly top-5 and return pretty much everyone from last year and add Derryck Thornton. I do worry about Andy Enfield as an in-game coach just a little bit as the NCAA Tournament goes on, but this team has all the talent in the world. Another team lower in the rankings would be Notre Dame. All Mike Brey does is finish top-5 in the ACC and he returns Bonzie Colson and Matt Farrell. I fully expect Temple Gibbs to be the breakout guard for Notre Dame this year.

It’s close, but I believe the money is just off. The other thing here is the Cavs would say no. They aren’t worried about the future as much as they are winning now. They still have LeBron and when you have LeBron (and Love) you worry about winning titles now. This Kyrie news has been pretty funny though with the fake trades and what people think of him. Listen, the Cavs aren’t fucked and they aren’t going to get nothing for him. As I mentioned earlier he’s under team control for a few years and will get back a good amount. The thing with trades in the NBA is it’s never a true dollar for a dollar trade. There’s always some give on one side. They aren’t going to get screwed and honestly, they probably won’t even trade Kyrie. He doesn’t have a no-trade clause and there’s complete reason to think they start the season with him and wait until December when newly signed guys can be traded. They’ll look to get a couple wings that aren’t 45 years old and a rim protector ideally. But, let’s stop acting like Cleveland is somehow going to be a disaster this year. There’s no leverage from Kyrie’s side and Cleveland isn’t going to panic to trade him, because he’s not a free agent. Cleveland has a plan, people I’ve talked to associated around the league have told me that. They aren’t going to just take the first offer out there. They know Kyrie can’t just leave. They know if he doesn’t show up, he loses even more value. They are going to look for people who can play with LeBron (hint: Malcolm Brogdon would be the ideal LeBron PG due to his ability to play on/off ball, great cutter, good shooter, long and can defend multiple position).

More fake Kyrie trades. Do they? Sure. They have some assets that can be moved. The Cavs would want Gary Harris and Wilson Chandler back for sure in this and with money, you probably need to get a 3rd team involved here. Honestly, if they still had Nurkic, this would be a great trade partner as they could easily get a grade offer based around Nurkic/Harris/Chandler. To me Nurkic is even more enticing than Kenneth Faried, especially with what the Cavs like to do. So let’s say it’s just a two-team trade between the Nuggets and Cavs. Cavs would send Kyrie and Shumper (a combined $29.1 million in salary) to Denver. The Nuggets would send Harris/Chandler/Faried (it still leaves a $1.7 million difference). So throw in some assets to cover that and I think that’s a fair trade for the Cavs. You get a young guy in Harris who can step in and play right away, who is a shooter. Chandler isn’t a 42 year old wing and Faried bumps up the front court a little bit. Again, that’s not a bad haul for Kyrie and Shump’s contract. But again, if Nurkic was around that’s the play, I think if a trade with the Nuggets happens it’ll be a 3-team trade. Remember the Cavs want someone who can help out right away, which is why they’d go Harris over Murray in preference. Question for Denver is what do you now with both Kyrie and Murray on the roster (not to mention Mudiay).

Right off the bat I’m counting Michigan State, Michigan, Minnesota, Maryland, Wisconsin, Purdue and Northwestern as tournament teams. It wouldn’t shock me if Underwood is able to get Illinois to contend and be a bubble team in his first year. They have some talent and he’s a top-20 coach. Out of that group Michigan State will contend for a No. 1 seed and the No. 1 overall seed. Minnesota and Michigan could also be top-4 seeds heading into the NCAA Tournament. I think Purdue/Northwestern/Maryland will be in the 7-10 spot and Wisconsin will be a 9-12 seed. It will be a bump up for the conference after last season for sure.