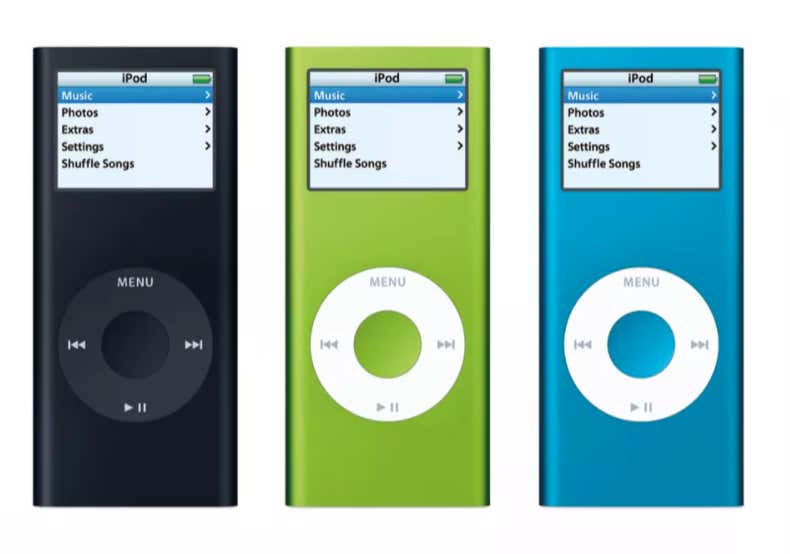 Gizmodo- Two more members of the Apple family just got put in the ground. On Thursday, a company spokesperson confirmed to The Verge that it has “officially discontinued” the iPod Shuffle and the iPod Nano.

As first noticed by MacRumors, Apple pulled both MP3 players from its website as available products today, something the company has done in the past with products it discontinues.

Huh? I thought these things were discontinued a looooong time ago. Like, before I was born. This is like hearing Blu Ray just officially discontinued the VHS. I took a gander at Apple’s homepage and they don’t even have a iPod in sight. They’re ashamed of the thing like it’s Eminem lyrics from the early 2000s.

When a fucking WATCH has taken your place in the technology world, you’re toast. It’s a clock. A clock outlived the iPod Nano/Shuffle, and while the Nano was fun for it’s bright colors and being able to fit into the small pockets of 8 year old Bob, the shuffle deserved this. What an all time horrible invention. Ol’ Steven Jobs was literally like, “Hey you know the iPod we just came out with that can store like 100,000 hours of music and give you access to any song you want right at your fingertips? You can even play brick breaker on it, that one? We have a new one on the way, we’re taking away brick breaker, and the screen, and the ability to choose what song you want to hear, and you can only put like 12 songs on this one.”

What the fuck was that shit? You knew you were fucked if you went to a pool party and one of these was hooked up to the speakers on the deck.

This was a weird blog. I know that. It was just a necessary one for me to cope with the fact that the iPod Nano and Shuffle still existed in 2017.