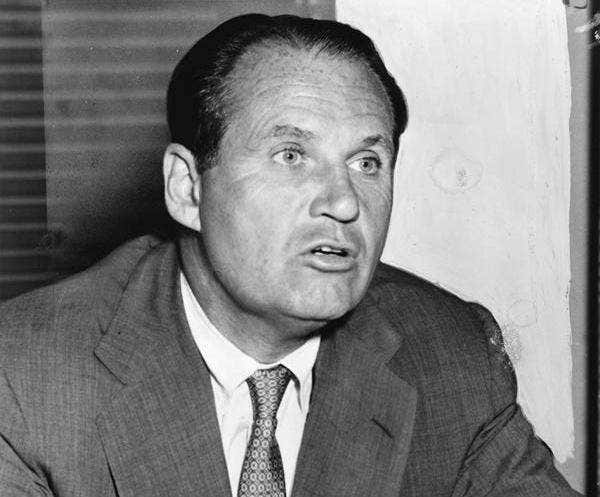 William A. Shea was key to the National League’s return to New York.

Plans for a third Major League known as the Continental League are unveiled by New York Attorney William A. Shea. The league which is set to begin play with eight teams in 1961, announces teams in Denver, Houston, New York, Toronto and the Twin Cities. The idea of the new league is mainly to force the American and National Leagues to expand, with the idea of returning a NL team to New York. The plan works as four expansion teams are created, including the New York Mets who begin play in 1962.

There can be no denying that the period from 1947-1956 was the golden era of New York Baseball. In all but one of those ten seasons a New York team had won the World Series. This included eight times in which the Fall Classic, was exclusively held in the Big Apple in a Subway Series. Among the classic moments in New York baseball, was Al Gionfriddo’s catch in the 1947 series, Bobby Thompson’s home run to beat win the pennant, the Yankees five straight World Series wins, Willie Mays catch in the well of the Polo Grounds, the Dodgers finally winning the World Series and Don Larsen’s perfect game. This all came to a cold harsh end, when the Brooklyn Dodgers moved to Los Angeles and the Giants moved to San Francisco following the 1957 season. The loss of the Dodgers and Giants hit New York hard immediately work began to bring National League Baseball to the Big Apple began.

For a half century baseball was unchanged. When the American League and National League made a working agreement for co-existence in 1903 there was eight teams in each league, with the Baltimore Orioles becoming the New York Highlanders the last franchise shift until 1953. Other than a brief challenge from a third league called the Federal League, which lasted two years Major League Baseball looked the same as it did at the start of the Century as it did as it the 50’s began. With Western expansion of the population, easier cross county travel due to jet planes, and the growing influence of television there began a desire to bring Major League Baseball to new markets. In 1953, Boston which had a team in each league saw the National League Braves one of the charter franchises move to Milwaukee. A year later the St. Louis Browns became the Baltimore Orioles, while the Philadelphia Athletics moved to Kansas City in 1955. It was only inevitable that Majors would reach the West Coast and that came with the Dodgers and Giants move in 1958.

Before the Dodgers moved to Los Angeles they were given an offer to move to Queens for a new stadium to be built near the old World Fair Grounds. With that new stadium as the lure, attempts were made to get the Cincinnati Reds, Pittsburgh Pirates and Philadelphia Phillies to the Big Apple, to no avail. At the time the National League and American League had no desire to expand as none of the 16 owners wanted to invite new members to their exclusive club. This kept out several cities who were all looking to draw a team to their growing metropolis.

Looking to either break the monopoly or get the National League to open a sport for New York, Mayor Robert Wagner hired Brooklyn Attorney William A. Shea. Looking to get a new team in New York for the National League, Shea knowing other cities wanted to join either league formulated a plan with the threat of a third major league. The league which was to be called the Continental League got immediate gravitas when it was announced that Branch Rickey, who as Dodgers President orchestrated the signing of Jackie Robinson would serve as league President. The league was to begin play in 1961, with five ownership groups representing Denver, Houston, New York, Toronto and the Twin Cities. Later it was announced Atlanta, Buffalo and Dallas would also have teams when play began.

With his new start up league, William Shea began lobbying congress to break Major League Baseball’s Antitrust exemption established in 1922. He would approach Tennessee Senator Estes Kefauver head of the Senate antitrust subcommittee to limit preexisting club’s territorial rights and the number of players a team would have the rights to under the reserve clause. Knowing the consequences of such action, the owners of the National and American Leagues agreed to allow expansion for the first time 1960, giving New York a new team to begin play in the National League in 1962.

The Continental League would fold without playing a game. Besides New York getting a National League team in 1962, the American League added a new team to Los Angeles called the Angels in 1961, while a second expansion team was added to Washington taking the Senators name. This allowed Clark Griffith to relocate the old Senators to Minnesota, where they became the Twins. Joining the New York Mets as an expansion team in the National League was the Houston Colt .45s. Atlanta another proposed city in the Continental League lured the Braves away from Milwaukee in 1966, while Dallas lured the Senators away from Washington in 1972. Meanwhile, baseball continued to expand in 1969 with teams in Montreal, San Diego, Kansas City and Seattle. Kansas City was a replacement for the Athletics who departed for Oakland in 1968. In 1977 Toronto would get an American League team, while Denver got a National League team in 1993. In a 40-year period, Major League Baseball would go from 16 teams to 30 teams, with Buffalo the only market in the proposed Continental League to never receive a team. 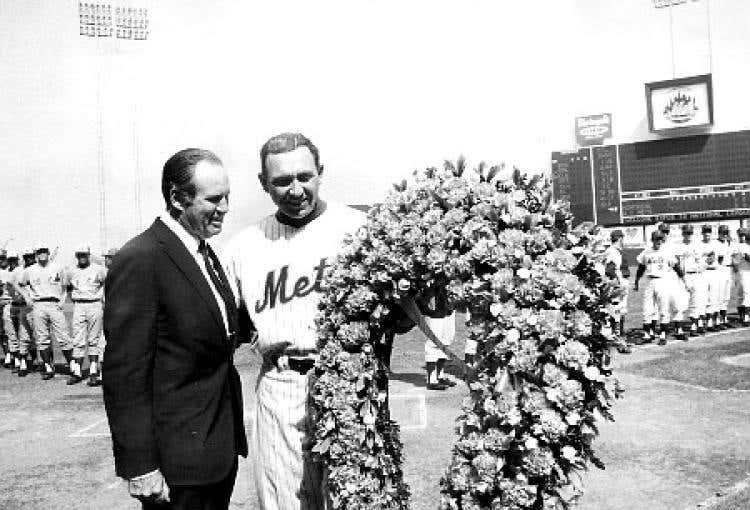 William A. Shea, the attorney behind the shrewd maneuver to force expansion would never get a formal position in Major League Baseball. However, the expansion New York Mets owing their existence to him paid the ultimate tribute. After playing in the old Polo Grounds in their first two seasons the Mets began playing in that proposed Queens Stadium that the Dodgers had rejected in 1964. Originally to be called Flushing Meadows Municipal Stadium the stadium was given the name William A. Shea Municipal Stadium before it opened. Though Shea Stadium was demolished following the 2008 season, the name remains connected with the Mets, as William Shea was honored with the retired numbers and pedestrian bridge at the new stadium was dedicated as Shea Bridge.