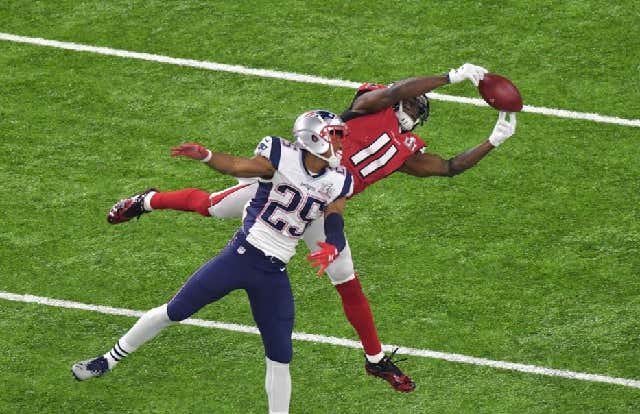 Business Insider – He may not have a Super Bowl ring, but Atlanta Falcons wide receiver Julio Jones is a man who enjoys his jewelry. Case in point: the four-time Pro Bowler lost a diamond earring while jet skiing on Georgia’s Lake Lanier, so he hired a dive team to retrieve it.

The earring was worth over $100,000, Jones told Atlanta news station WXIA-TV on Tuesday. The Alabama native camped out on his jet ski while divers Richard Pickering and Bobby Griffin scoured the lake’s murky bottom for any sign of the lost item.

Pickering and Griffin seem to have gotten more than they bargained for when they signed up for the job. Lake Lanier is over 65 feet deep, and the bottom is covered with trees and debris from the reservoir’s creation in 1956. The divers used flashlights to look for the gleam of an earring, but to no avail.

Sweet Jesus, it’s just gotten so easy to rip on the Atlanta Falcons I just might have to recuse myself. It’s just unfair now. Like shooting polar bears from a helicopter.

The thing is, I like Julio Jones. He can catch passes on my tackle football team any time. But this is just a terrible look for him. Being dumb enough to ride a jet ski wearing an earring that costs about 2/3 of what I paid for my house is the worst kind of omen as you’re trying to recover from one of the most humiliating losses of all time. It’s like Tom Hanks wife losing her wedding ring down the shower drain in Apollo 13, right before the mission launches and everything goes to shit. And I don’t care how much money he makes. If the “Broke” episode of 30 for 30 taught us anything, a hundred thousand dollars is a hundred thousand dollars.

If I can offer any sort of consolation though, it’s this: At least this recent episode is only the second worst way Jones lost a ring this year.
@jerrythornton1