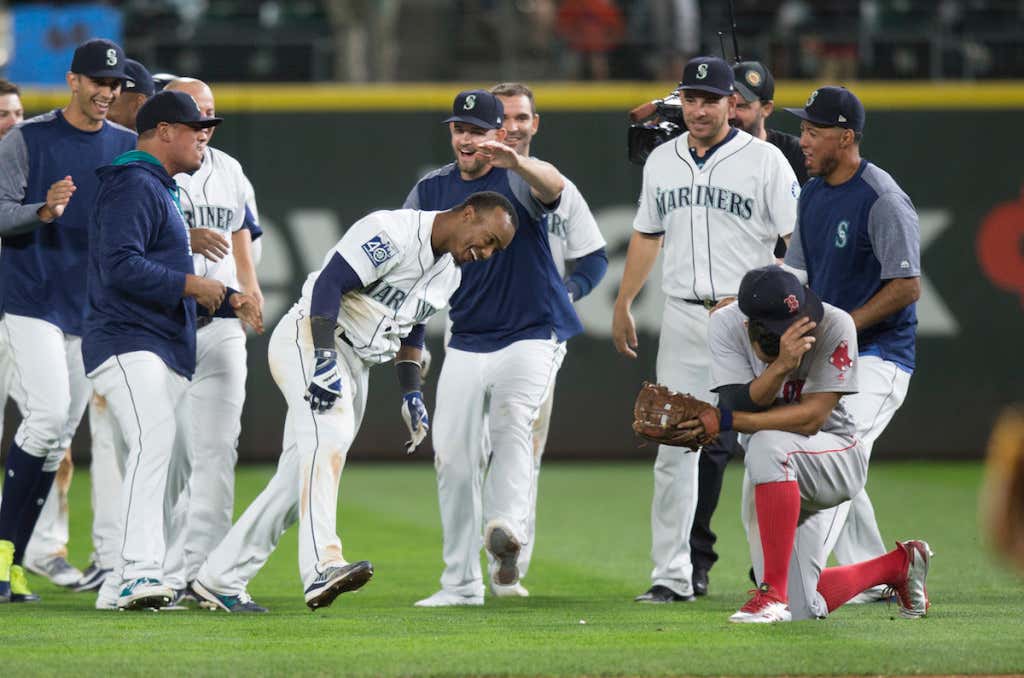 This fuckin’ team, man. They’re like a new pair of leather boots that you can’t quite break in no matter how hard you try. When you first get them, on the outside, they look great, but after four months of putting them on every single day, they still don’t feel right. They’re uncomfortable. I don’t feel good about them, because they don’t make me feel good. Here and there, they might feel okay, but then they’re right back to that uncomfortable feeling.

Over the winter, this 2017 Red Sox team was constructed to win a championship. For all we know, that could still happen. They’re in first place, they have the second best record in the American League, and they have last year’s runner-up for the MVP, the best closer in the game, and this year’s future Cy Young award winner. That right there should make you feel good about this team. But I don’t. And I’m assuming you don’t, either. I’m not trying to force an agenda here, by the way. That should be pretty obvious by now. I don’t want people to hate this team or strongly doubt their ability to win a championship. After all, I am a Red Sox fan, I want to like this team, and I want them to do well. That being said, they’re making it really difficult for me to do that lately.

That should not be taken as a bandwagon sentiment. I think we all knew that it would be an adjustment to live a life without David Ortiz. I’m not blaming this team’s woes solely on the absence of Ortiz, either. At least, not all of them. There are some character issues that this group has that I don’t think would be as glaring if Ortiz were still here, but that’s a bullshit excuse. He announced his retirement in November of 2015. The Red Sox had over a year to plan for life without Ortiz. This falls on Dave Dombrowski for the team that he assembled, John Farrell for the management of the team that Dombrowski assembled, and the players in that clubhouse who are the team that Dombrowski assembled, which Farrell has to manage.

The Red Sox won their sixth straight game on July 4 to go four games up on the New York Yankees in the AL East. On that day, the answer was a resounding “Yes” to whether or not the Red Sox had seen their last day of the 2017 season anywhere other than first place. The Yankees were folding, no other team posed a legitimate threat to Boston winning the division, and the Red Sox were finally hitting their stride. Since then, they’ve gone 6-12. That’s the 27th worst record in the MLB out of 30 teams over that span. Over those 18 games, they’ve hit a measly .205 with a .572 OPS with both marks being the worst of any team in the majors.

The team clearly needed/needs a spark, specifically in their lineup, so Dombrowski called up 20-year-old top prospect Rafael Devers, who made his major league debut on Tuesday night and went 0-for-4 with a couple walks. Before the game even ended, Dombrowski traded for Eduardo Nunez from the San Francisco Giants, who has played mostly third base this year, but he’s also played some shortstop. Nunez was one of the names linked to the Red Sox to shore up their third base situation, but it seemed odd that they’d bring in Nunez literally on the same night that Devers made his major league debut at third base.

I think Nunez is here because of Xander Bogaerts. Bogaerts got hit on the hand with a pitch back on July 6 and exited the game. The X-rays were negative, but I’m positive that his performance at the plate has been atrocious since getting hit. Over that 13-game span, Bogaerts is hitting .149 with a .422 OPS. They’re getting next to nothing from a guy who they were once counting on to be a top of the order, even a middle of the order, bat for them. He was never going to be a prototypical middle of the order bat, but the point is that he’s one of the best hitters on the team, and he hasn’t been right for quite some time, even before the hand injury.

He’s also a guy who has gone through some pretty significant second half drop-offs in terms of offensive performance. With Nunez here, you now have insurance in case Devers totally tanks and you want to pull the plug on that rather swiftly so not to hurt the kid’s confidence, development or both, and you also have someone who can play shortstop if and when the Red Sox decide to put Bogaerts on the disabled list. Me personally, I’d do it the second Nunez walks through the door. Even if Bogaerts maintains that he’s healthy, he obviously needs a breather and some time to get his head right, because this team can’t withstand a bat as important as his going as cold as it has.

On the surface, Nunez isn’t wowing anybody. But is he an upgrade over Deven Marrero? Yes, he is. Offensively, I should say. Most major league infielders would be. Nunez is also an insurance policy if Brock Holt’s vertigo decides to act up again. There’s a lot of uncertainty surrounding some of these Red Sox infielders like Devers, Bogaerts, Holt, Marrero, and even Dustin Pedroia to an extent, who has had issues with his surgically repaired knee this season. And it’s not like Nunez is some Godsend, but he does give you a rather decent backup plan if one or multiple primary plans falter.

But after last night, and I’ll debate this until my fucking face turns blue, it could not be more obvious that the move that Dombrowski needs to make before the trade deadline is for a reliever. Stop giving me collective numbers. Yes, the Red Sox have the third best bullpen ERA in baseball (2.97). That’s great. But give me names. Who would you trust in that game last night besides Craig Kimbrel? Is it Joe Kelly? He’s on the disabled list. Matt Barnes? He’s got a 5.40 ERA on the road compared to 0.75 at home. Heath Hembree was the guy who blew it in the sixth last night, just like he blew it against the Blue Jays last week. Robby Scott isn’t even on the roster anymore. And after that, you have Fernando Abad, Doug Fister, Brandon Workman (who I actually like as a sleeper to be a solid contributor down the stretch), and fuckin’ Blaine Boyer AKA the Red Sox need some goddamn help in the bullpen.

Again, stop giving me numbers. Give me names and tell me who you trust in a big spot with the game on the line besides Kimbrel. The correct answer is that there is no name. Dombrowski has to address this, and I would say that now is a pretty good time, considering that the Yankees are now one game behind you, and actually have one fewer loss than you. Unless Eduardo Nunez can take the ball in the eighth inning, then your work better not be done here, Dave. Time to let that credibility of yours shine before the season implodes to shit.

Editor’s note — Just wanted to give the Stoolies the heads up, for those who didn’t already know, I’m in the process of getting my ass to New York. I’m excited about it, and we’ve got a new baseball show/podcast called Starting 9 that we’re gonna be launching soon that I can’t wait to get started on. Yes, I know the Red Sox coverage recently hasn’t been as timely as you’ve probably gotten used to over the years, but I’m scrambling to get my shit together over here, tying up loose ends, finishing out my local obligations, and getting ready for the big move. Once I get to HQ, the Red Sox coverage will be what it always has been and I appreciate everybody being so understanding. I’ll still cover the Red Sox as much as I always have, and I’ll still be doing the league-wide MLB coverage on the blog. The only change is where I’m sleeping at night, and that we’ve added an MLB show. I’m looking forward to it, and I hope you are, too.