ABC News - LaVar Ball pulled his Big Ballers AAU team off the court during a game Saturday after he was whistled for a technical foul for arguing a foul call and uttering a profanity toward a referee.

The incident occurred during a playoff game at the Double Pump Best of Summer Tournament in Anaheim, California. The game was ruled a forfeit, giving the victory to the opposing team.

Ball’s team, which includes his youngest son, LaMelo, was winning 69-60 at the time of the forfeit, according to USA Today Sports.

Then, in an apparent reference to an official who Ball felt was out of position, he said, “He came way over here to call that bulls—.”

After being issued a technical, Ball motioned toward his players on the court and bench and said, “Let’s go.” Ball and his players proceeded to grab their gear and leave the court.

In a video posted by Overtime, Ball can be heard saying outside the gym afterward, “It’s not about the referee. I’m not gonna have my guys playing hard, and they’re cheating. I don’t play that s—.”

LaVar Ball is a maniac. An absolute maniac. Every single thing he does is completely unpredictable, completely insane, and 100% of the time laugh out loud funny. He’s a WWE character on a basketball court,

and he never fails to go above and beyond. And this clip from an AAU playoff game from over the weekend is no exception. His team was winning the game 69-60, about to close it out, and he yanked his guys off the court because he got T’d up. Didn’t let his Big Ballers finish out the win because he was upset with a ref and felt the ref was cheating the team…even though they were winning. Amazing.

Yeah we can go on and on and on about if his was selfish of him to forfeit and lose a playoff game his team was winning because he was upset, or we can talk about how amazing it is that he is coaching in his BBB slides, available for purchase for only $220 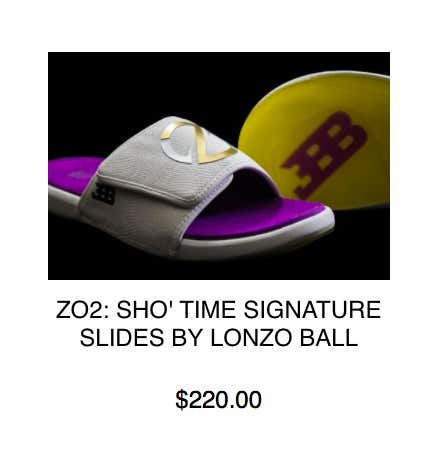 We keep wondering why anyone would want to play for him and when this whole charade is going to run out of steam, but for now I’m very much enjoying it, even if it’s completely insane and will have a fiery ending.