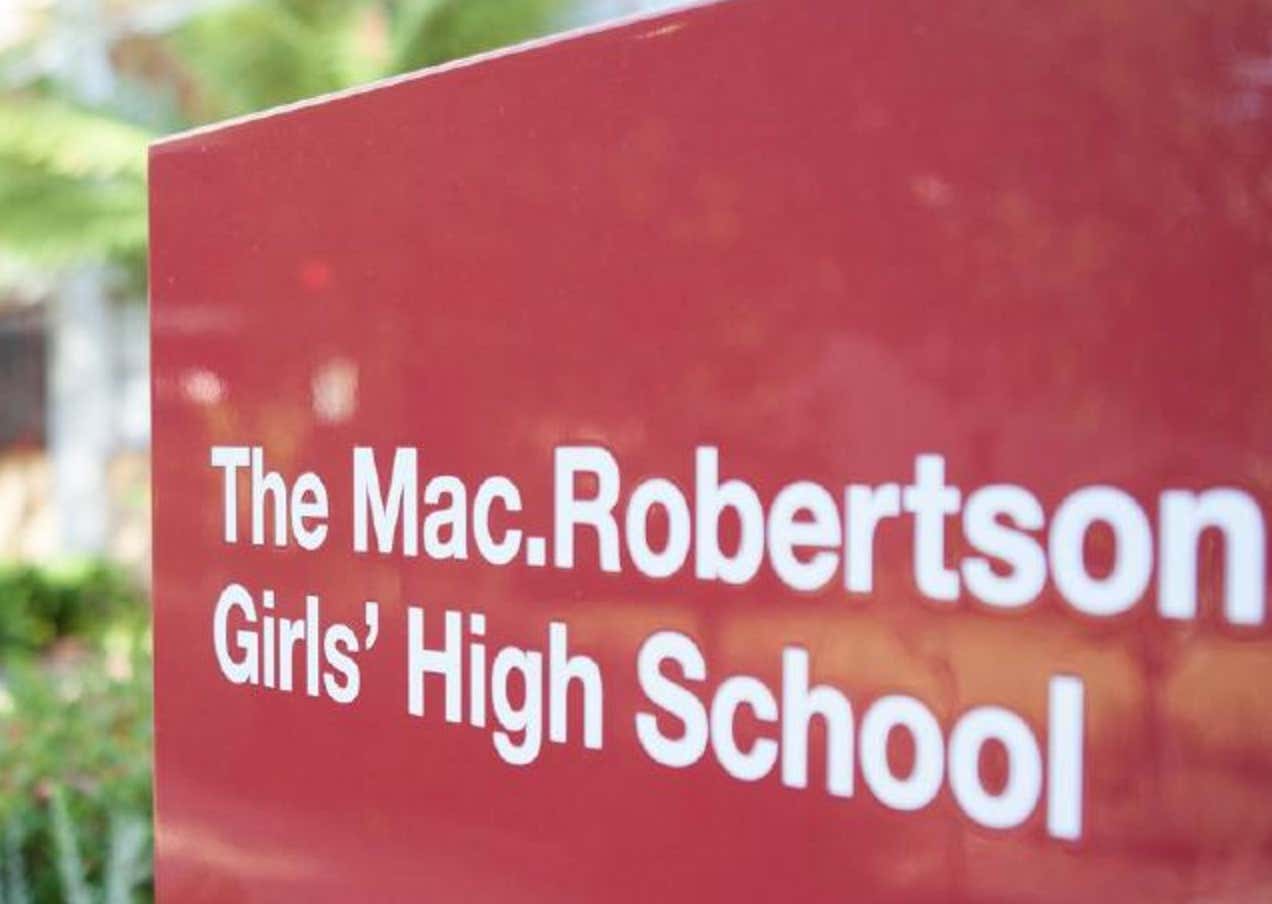 NY Post- A student at one of Melbourne Australia’s most prestigious schools has won the support of some students after leaving notes explaining why she was defecating on school property.

The student began leaving feces around the bathrooms of the reputable Mac.Robertson Girls High School in Melbourne, Victoria, at the beginning of the year, during the school’s first term.

According to a student from the high school, who spoke to News.com.au on the condition of anonymity, the student defecated on the floor of the bathroom and around the sink “on numerous occasions” since February.

On Monday, the unidentified student added an open letter to her protest and placed it around the school’s premises.

In the letter, the student confirmed that it was not a random act but was a protest against what she claimed was a poor educational standard at the school.

“I know I have resorted to the most extreme method to make a symbolic point but you NEVER listen to student voice,” the note began.

“We all know you’re not going to do anything, but at least my behavior has punished the school for what it has done.”

“The teachers are s–t, so I have left symbolic droppings of what the education is like at this school. CRAP!!!”

She pointed out one particular teacher “brings his earphones and watches … mindless videos” while students are directed to “read the text book and answer the questions.”

Another student at the school told News.com.au that Meath asked for the perpetrator of the act to come forward in assembly on Monday.

“She said, ‘I strongly urge this person who wrote this letter to come and talk to me,’ but she didn’t really address the issue,” the student said.

The letter has led to a flurry of rumors and gossip around the all girls campus, with some speculating there might more than one person responsible for the issue.

In her statement, Meath said her school was “one of the highest performing schools in Australia.”

“As a proud government school with a rich history in education, we stand by the professionalism and dedication of our teachers.”

Croikey, we have a rogue dumper on the loose at a prestigious all-girls’ school in Australia. I did a little digging and this place is STRICT: no makeup allowed, girls wear blazers and ties, etc. Here’s a look: 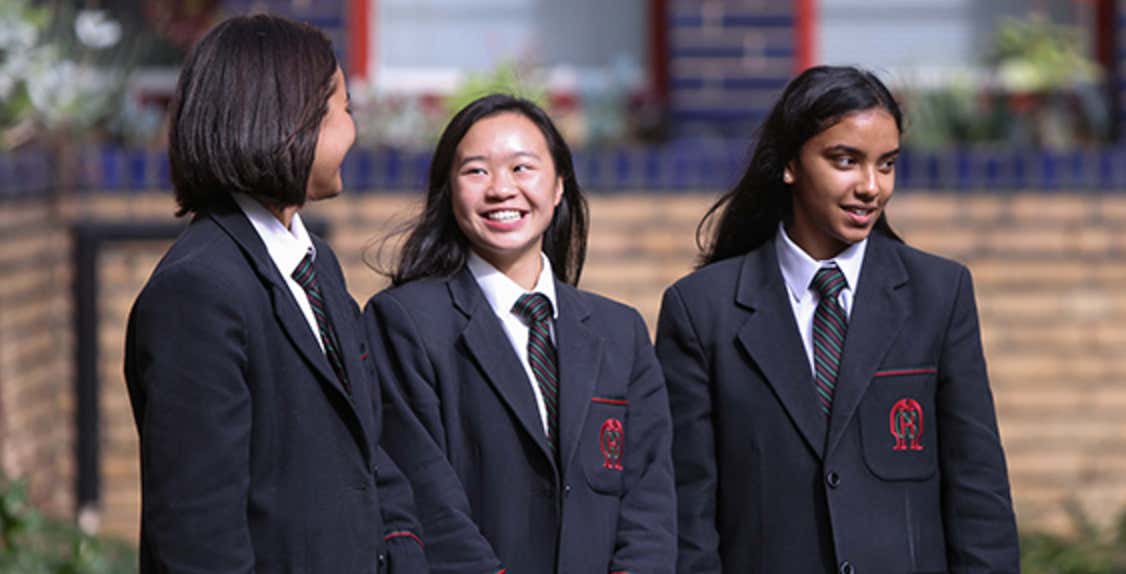 Diversity FTW. The school prides itself on academic excellence and yet we have a student so dissatisfied with the standard of teaching that she is leaving mud tracks through the hallways like a goddamn clydesdale. Amazing! You want your voice to be heard? Stick a note to the wall using your own excrement as adhesive.

While I acknowledge the effectiveness of this method, it needs to stop. Do you know how hard it is pick human poop off a linoleum floor? You can’t just run it over with one of those janitor cart sweepers; it would shmear that shit everywhere. It’s humiliating, undignified, and miserable. When you sign up to be a janitor, you know you’re going to have to deal with some bad days but I can’t imagine it gets much worse than the day you have to doggybag a trail of triggered girl poop. 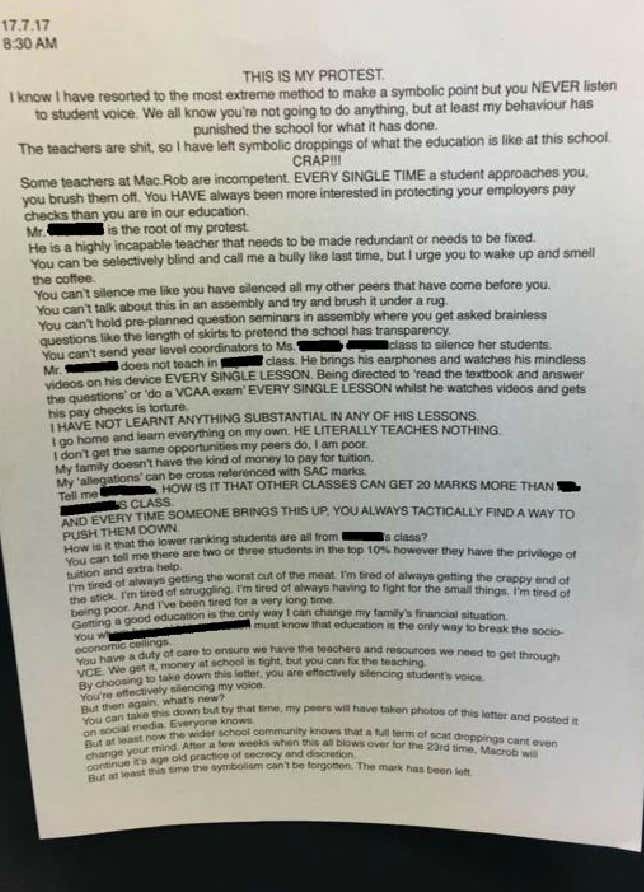 Can you imagine being the teacher she singles out as the root of the problem? To be so bad at your job that you drive a girl to shit everywhere in protest? Sounds like he doesn’t give a fuck, which is exactly what you’d hope for. Tomorrow’s class will be business as usual: read your textbooks while I watch “Humans are amazing” compilations on my phone. Those who can, do. Those who can’t, teach.

“I urge you to wake up and smell the coffee.” Yum. Bet that’s a nutty brew.