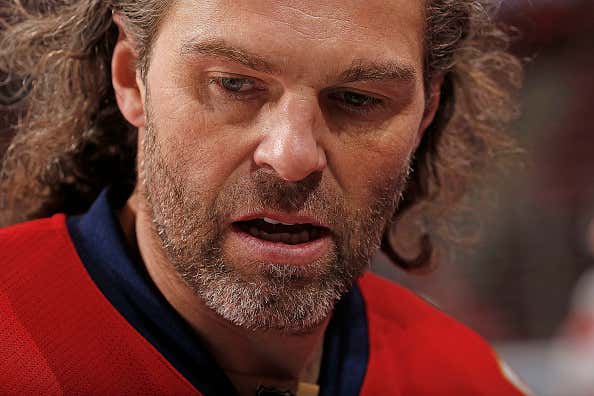 I’ve mentioned this before–but in just this offseason alone, a baker’s dozen of players over the age of 35 have locked up a new contract for at least the 2017-18 NHL season. One of the very few remaining out there without a team next year is Jaromir Jagr. Which begs the question… is he being treated unfairly due to his hair?

The obvious answer here is a resounding “yes”. The first thing we got to get Jags to do is cut his hair. I don’t think he should represent himself in that way in terms of the hairstyle. Just go clean cut. Why not?

When Jagr was rocking the mullet in the 90s, it was one of the most beautiful sights known to man. The way that thing waved behind him in the wind is only comparable to some of the finest pieces of art throughout history. Over the last couple of seasons in Florida, he’s done his best to bring it back. And while the length is certainly there, there’s no denying the fact that the amount of grey in there shows his age. Are NHL GMs that afraid of throwing a couple million to a guy who should be on the cover of “Touch Of Grey”? They shouldn’t be, but it appears that they are.

So my advice to Jagr would be to chop it off. Clean cut, clean shave. It’ll make him look at least 5-10 years younger. It would especially be appealing to a team like Toronto who has the clean cut law in place that forced Matt Martin to cut his flow last year. Just saying.