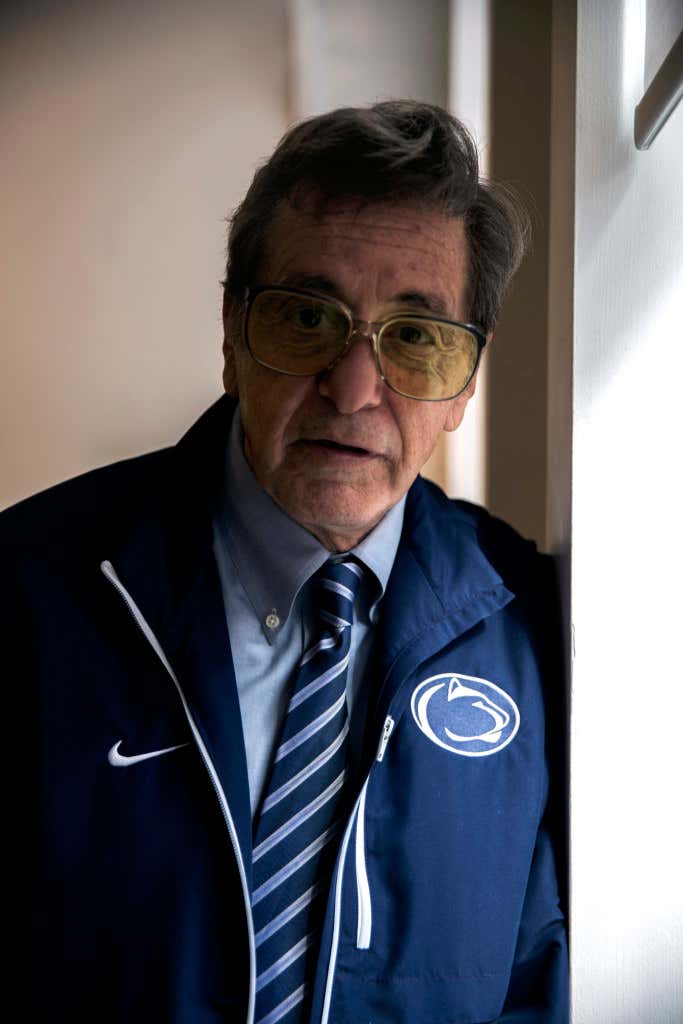 Variety– “HBO has unveiled a first look photo of the actor in character as the football coach for the cabler’s upcoming project directed by Barry Levinson.

The as-yet-untitled film centers on Joe Paterno, who, after becoming the winningest coach in college football history, is embroiled in Penn State’s Jerry Sandusky sexual abuse scandal, challenging his legacy and forcing him to face questions of institutional failure regarding the victims.

The film also stars Riley Keough as Sara Ganim, the 23-year-old journalist who first reported on the scandal, bringing it to the attention of the national media — and ultimately winning a Pulitzer Prize for her work. Annie Parisse will play Mary Kay Paterno, Joe Paterno’s daughter.”

HBO just released the first set photo from their untitled Joe Paterno/Penn State film and it is a little underwhelming. Is it just me, or does this look nothing like Joe Pa? I just see a sadder, older version of Al Pacino drooping his eyes into the distance. This should still be a pretty interesting watch, but at no point do I think I’ll be convinced that I’m watching Joe Pa waddling to the tunnel to go take a shit (I really hope that scene makes it in).

It all comes down to the vocals though. If he can emulate Joe Pa from this old Big Ten commercial, I think he’ll be okay. Hopefully, he’s watching this on loop night in and night out.

This is also a big win for Pacino. I may be in the minority, but I think Tony D’Amato is the most overrated fictional coach in history, the Inches speech an obvious exception. Pacino finally gets to play a guy who actually knows what the hell is going on (on the field), and I think his performance will be better for it.

I’m sure James Franklin is relieved this isn’t airing until 2018; Penn State is sitting pretty in the Big 10, gotta let Saquon Barkley and Trace McSorely show out for one more year before a huge scab is ripped off and reopened in Happy Valley.