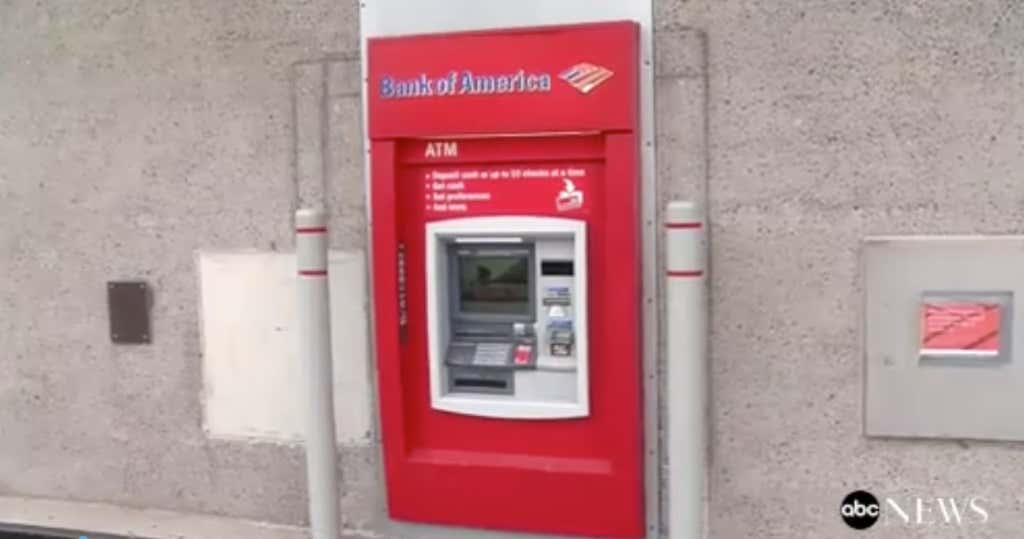 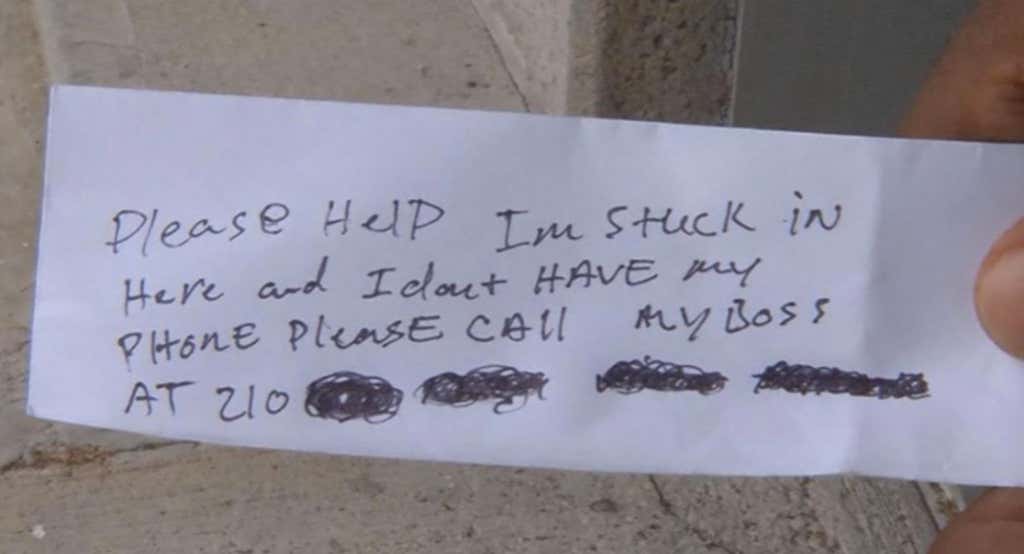 ABC – Being stuck in a room with an ATM sounds like a dream for anyone hungry for cash, but for one man in Texas, it was a nightmare.

The man, a contractor, got trapped inside the ATM room at a Bank of America in Corpus Christi when he was changing out a lock, according to ABC Houston station KTRK-TV.

Confined with a cash machine and without his phone, he began to slip notes to outside bank customers through the ATM’s receipt slot.

“Please help. I’m stuck in here. I don’t have my phone,” one of the notes read.

Some customers considered the notes a joke, but one person called police, who arrived on the scene.

Responding officers kicked down the door to free the man, who had been trapped for nearly two hours.

My first thought when I saw this story was wow, this poor fucking guy – dealing with the some of the dumbest morons alive.  Or at least the most inconsiderate morons.  Like take 15 seconds out of your day to just call the number on the slip and see if the story checks out.  Everyone just assuming it’s “a joke” while the bastard slowly wastes away/roasts/runs out of oxygen in a freaking cash machine.

But then I realized, what would I do?  I’d think the same exact thing.  Everything’s a fucking prank these days.  You just automatically assume you’re being filmed on camera 24/7/365, someone waiting around the corner with their phone in their hand recording you to use you to go viral and get some internet fame.  No chance I’m risking looking like a doofus and embarrassing myself like that.  I mean who the fuck gets stuck in an ATM?  That’s not even possible.  Fuck your prank bro.

Corpus Christi Police Department officer Richard Olden told KRISTV most folks who saw the notes figured they were some kind of prank. But one particularly concerned customer decided he should probably call the cops.

“We come out here, and sure enough we can hear a little voice coming from the machine,” Olden told KRISTV. “So we are thinking, This is a joke. It’s got to be a joke.”

The contractor’s supervisor eventually showed up, and—unable to get into the room any other way—police had to kick down the door and rescue the man. According to KTRK, he told them he’d been trapped inside for about two hours after something went wrong with the room’s electronic lock—the very thing he’d come to fix in the first place.

According to Olden, the whole thing was “a once in a lifetime situation that you will probably never see or hear again.”

“Everyone is okay,” he said. “That somebody was stuck in the ATM, it was just crazy.” [Vice]

Sorry pal but you can blame all the millennial YouTube pranksters for everyone’s overall jaded and cynical view of the world now.  God help anyone who finds themselves in any sort of slightly awkward danger and needs a Good Samaritan to come to their aid.  That ship has sailed.