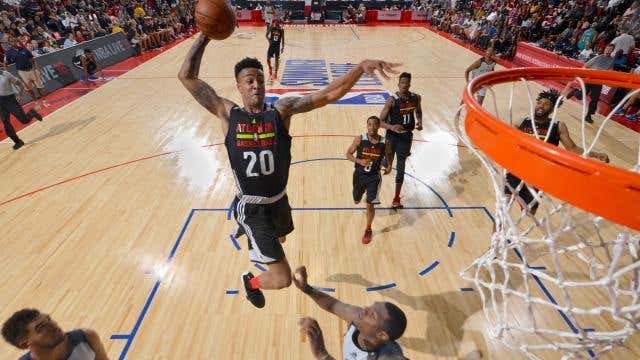 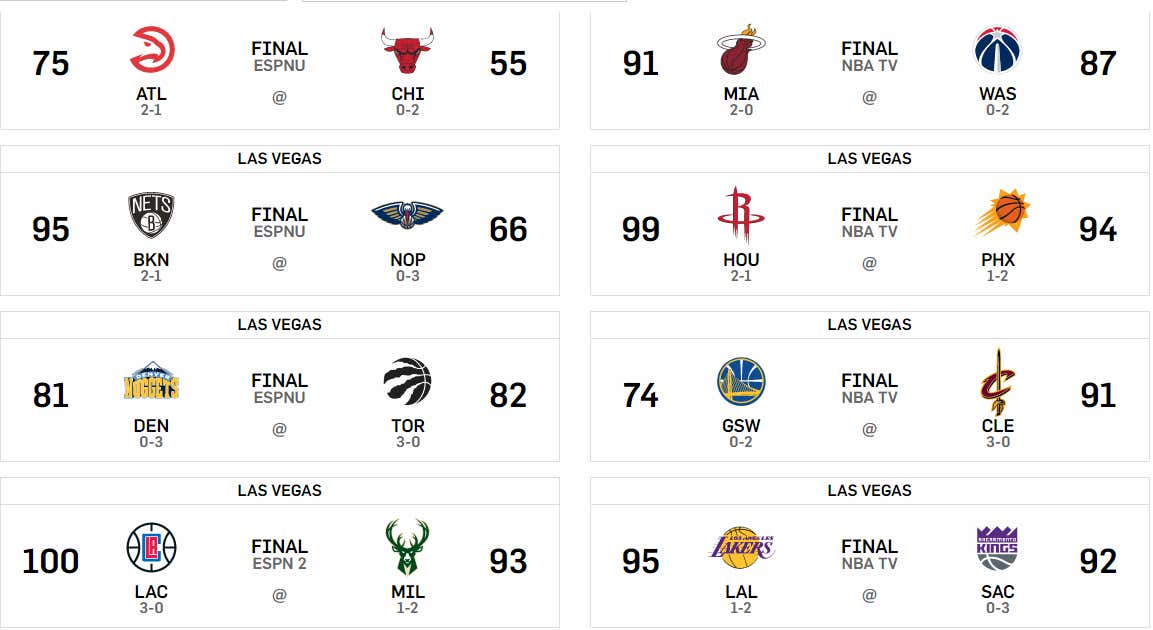 Jordan Bell was the best defender in college basketball last season. Jordan Bell is also 6’9″. Sir’Dominic Pointer is more athletic than any of us can imagine. I think Bell should have jumped:

Collins is one of the bright spots for the Atlanta Hawks, as they simply won’t be that good this year – as in they will be a bottom-4 team in the league all year. Now, that said, they have a good chance to rebuild as they have some assets and can build around Collins and De’Andre Bembry on the wing – and depending what you think of Dennis Schroder. Collins put up another double-double against the Bulls yesterday going for 15/11, but more importantly he’s showing a little bit more versatility than he did at Wake Forest. Now, his game is similar in the sense of being wildly efficient as he’s shooting 60% from the field, but he’s showcasing more moves and more agility. Danny Manning and Wake like to run almost a weave out front with their guards and then bring up Collins to set the high ball screen on the wing, allowing him to roll, guard to drive and a shooter in the corner. He’s not doing that in the NBA. He’s second in the Vegas Summer League with 10.7 rebounds per game as well. He continues to be excellent at cutting to open space and getting a quick jump on his dunks. Granted, it’s just summer league, it’s a step in the right direction:

De’Aaron Fox Misses Part of Game Due to Injury:

We were robbed of a great late night July game when the Lakers announced Lonzo Ball would miss the game against the Kings with a groin injury (they also sat Josh Hart and Kyle Kuzma). Fox vs Ball is something we got to see two times last year in college and both players are all sorts of fun, with two totally different games. Fox is going to be one of the fastest players in the NBA from day 1, likes to get to the rim and has an okay midrange game. Ball likes to distribute, pushes tempo with his passing and has almost 0 midrange game. So with Ball missing last night, all eyes were on Fox, which only lasted about 2.5 quarters. He left the game midway through the third after tweaking his ankle. He was sitting on the sideline with an ice bag around his ankle and luckily it doesn’t look serious. While healthy he continued to attack the glass and has been more consistent with his jumper this summer.

Josh Jackson, the No. 4 pick out of Kansas, is reminding everyone why he’s described as a ‘motherfucker’ in scouting reports. He gets after you no matter the situation and will beat you a variety of different ways. Last night against Houston he put up 20 points and 6 rebounds while chasing Troy Williams around on the defensive side of the ball. The Suns are one of the more intriguing young teams in the league, not that they will contend this year or next, but with guys like Jackson/Booker/Chriss/Ulis/Bender/Williams they are building for the future.

Bam Adebayo was someone who absolutely flew up the draft board during the pre-draft process. Many people thought he would be a late first round/potentially second round pick before ending up in the lottery to the Miami Heat. A couple of the reasons as to why he’s there? First, his defensive versatility. In today’s game teams absolutely slobber over bigs who can guard multiple positions, run the floor and protect the rim. That’s exactly what Bam can do as he’s averaging over 2 steals a game in Vegas after going for 1.0 per game in Orlando. The second reason is his athleticism. You expect him to get better offensively and while he’s struggling from the field (45% in Vegas) he’s showcasing more moves than he did all season at Kentucky. An encouraging sign though is his strong free throw shooting as he does have a nice touch from the midrange. He also started to showcase some passing yesterday.

This is the part of the blog that’s fun. Taking a moment to appreciate what the rookies have done so far in Summer League and coming up with a completely arbitrary ranking system of who has impressed me so far. Yes – I know it’s summer league and doesn’t count, but let’s just say for fun there is a summer Rookie of the Year award. Again, this is simply who has impressed me the most, as I’m sure 100% of people will disagree with what I have:

N/A: Markelle Fultz (would be on this list, but injury)

Yesterday the Magic had a decision to make. Waive C.J. Watson or pay him $5 million. They opted to waive him, pay him the $1 million waive fee and move on, making Watson a free agent now. This move was clearly to keep salary space open for the future as they can eat the $1 million this year (they can stretch it, but that would be incredibly stupid) and live with point guard depth of Elfrid Payton, Shelvin Mack and D.J. Augustin. The Magic need to be as bad as possible to stay in the top-3 and build around Jonathan Isaac, who is absolutely the future of this franchise, even more than Aaron Gordon. Ideally they can get Luka Doncic in the draft next year, who if you don’t know already, just enjoy his film. The 18 year old Slovenian currently plays for Real Madrid and is a consensus top-5 pick.

This signing makes sense as Bullock was a throw-in for the trade that brought Marcus Morris to the Pistons. The problem with Bullock is he’s been unable to stay on the court due to injures. The 26-year old is coming off his most productive season (playing over 15 minutes a game) and can really shoot the ball – something the Pistons can’t do. He shot 39.9% from the 3-point line the last two seasons and is a career 35.5 % 3-point shooter. He will miss the first five-games due to suspension, but if he can stay healthy he may be able to play 15-20 minutes per night on the wing to provide shooting along with Bradley and Kennard.