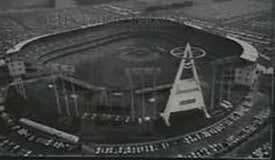 Aerial view of Anaheim Stadium during the 1967 All-Star Game.

The midsummer classic comes to Anaheim and turns into a marathon to remember as it takes 15 innings for the National League to edge the American League 2-1. All three runs are solo home runs, with Richie Allen of the Philadelphia Phillies going deep in the second inning off Dean Chance of the Minnesota Twins, while Brooks Robinson of the Baltimore Orioles answered in the sixth inning with a home run off Ferguson Jenkins of the Chicago Cubs. Tony Perez of the Cincinnati Reds would win MVP with a homer in the 15th inning against Catfish Hunter of the Kansas City Athletics.

The 15-inning game sets a record for the longest game in All-Star history that would be equaled in 2008 at Yankee Stadium. While home runs drove the offense, pitching was the story as 12 pitchers combined for an All-Star Game record 30 strikeouts, with each pitcher recording at least one. Many of the pitchers would go on to complete Hall of Fame careers. This included National League starter Juan Marichal, representing the San Francisco Giants, Ferguson Jenkins who had a game high six Ks, Bob Gibson of the St. Louis Cardinals, winning pitcher Don Drysdale of the Los Angeles Dodgers, Catfish Hunter who got the loss, and New York Mets super rookie Tom Seaver who recorded the final three outs for the save.

Among the hitters who had games to forget was Hall of Famer Roberto Clemente of the Pittsburgh Pirates who had four strikeouts, while Dick Allen who went deep on the second inning fanned in his final three at bats. Clemente’s Pirates teammate Gene Alley also struck out three times, as did Tony Oliva of the Minnesota Twins. Tony Conigliaro of the Boston Red Sox along with Hall of Famers Harmon Killebrew representing the Twins and Orlando Cepeda of the Cardinals all went hitless in six at bats, as the pitchers ruled the day at the Big A. With the win, the National League improved to 20-17-1 all-time in All-Star Games, as they were in the middle of a 26-year stretch where they lost just three times.