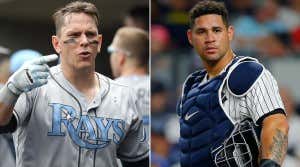 NYDN- Gary Sanchez found himself on the wrong end of a low blow. Rays first baseman Logan Morrison, who is tied for second in the majors with 24 home runs, doesn’t think the Yankees backstop is deserving of a spot at next week’s Home Run Derby.

“Gary shouldn’t be there,” Morrison told the Tampa Bay Times. “Gary’s a great player, but he shouldn’t be in the Home Run Derby.”

Sanchez does have an underwhelming 13 homers this year, but he spent a month on the disabled list.

“I remember when I had 14 home runs,” Morrison said. “That was a month and a half ago.”

What an idiot, what a fucking idiot. I get it that if you go out and hit 24 home runs, you want to be in the home run derby, especially if it’s your career high. However, the Home Run Derby isn’t about how many home runs you’ve hit this year. The derby is about how far and how hard you hit home runs and if fans even care you’re alive. Gary Sanchez leads Logan Morrison in all of those categories.

To help everyone understand this, I’ve made this handy chart:

The Home Run Derby is an exhibition to grow the excitement around baseball. That means you go with the more exciting players and not the guy who plays for the team with the lowest attendance in the league. It’s the economics of the game. You want to be showcased by the league? Be more exciting. That’s why there isn’t a base hit derby.

Some other things to consider per Buster Olney:

So let Morrison be mad that he wasn’t invited to the Home Run Derby all he wants. But he would be a terrible pick to be in the Derby. He likely won’t even make the All-Star team, even though he’s in the final vote, because he plays for the Rays and they only have 15 real fans and only 5 of those have internet access.

PS: The Rays were deciding between Morrison and Chris Carter this offseason and went with Morrison. They really fucked us there.