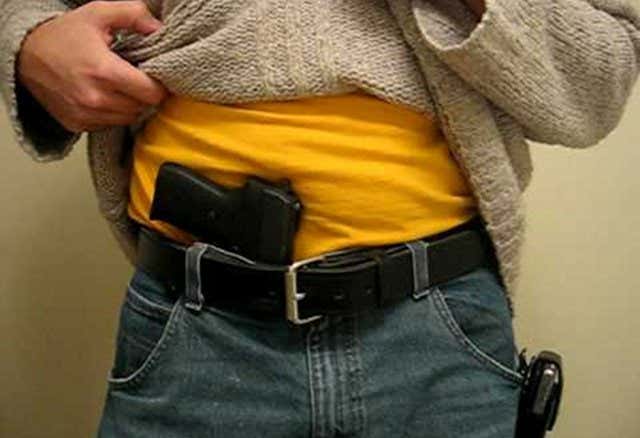 JACKSONVILLE, Fla. (AP) – A Florida man accidentally shot himself in the penis when he sat down on a gun in the driver’s seat in his car.

Several television stations report that the Jacksonville Sheriff’s Office says the man ran into his girlfriend’s house Friday after the gun discharged. She saw that he had a wound in his groin and took him the hospital, where he underwent surgery.

The sheriff’s office said the 38-year-old man has a previous conviction for cocaine possession and may now face charges of being a felon in possession of a firearm.

What a shitty holiday weekend for this dude. He thought that he was just gonna cruise over to his girlfriend’s house for a little get together and bingo, bango his dick is shot off and he’s in jail.

I’d like to see video of him running into his girlfriend’s house.

“Hi honey. You seem upset. What’s the issue? Oh. Thank you for the compliment. You’re too sweet.”

“You deserve it. Anyway, I’m concerned that I might have accidentally fired a bullet into my bellend. Can you take a look?”

“Buy me dinner first, lol. Of course, I can! Whip that hog out.”

* he shows her a bloody mess of a penis *

“Yep. You shot yourself.”

The phrase “insult to injury” gets tossed around a lot but it’s extremely appropriate in this case. Shooting your penis is terrible to begin with. I know that. You know that. Hell, the Lord knows that. Explaining to the fellas in cell block B that you Plaxico’d your privates is the worst way to start a friendship with your new prison pals. You lose all kinds of credibility. I kinda think that shooting yourself should be a punishment served situation. No reason for jail time.