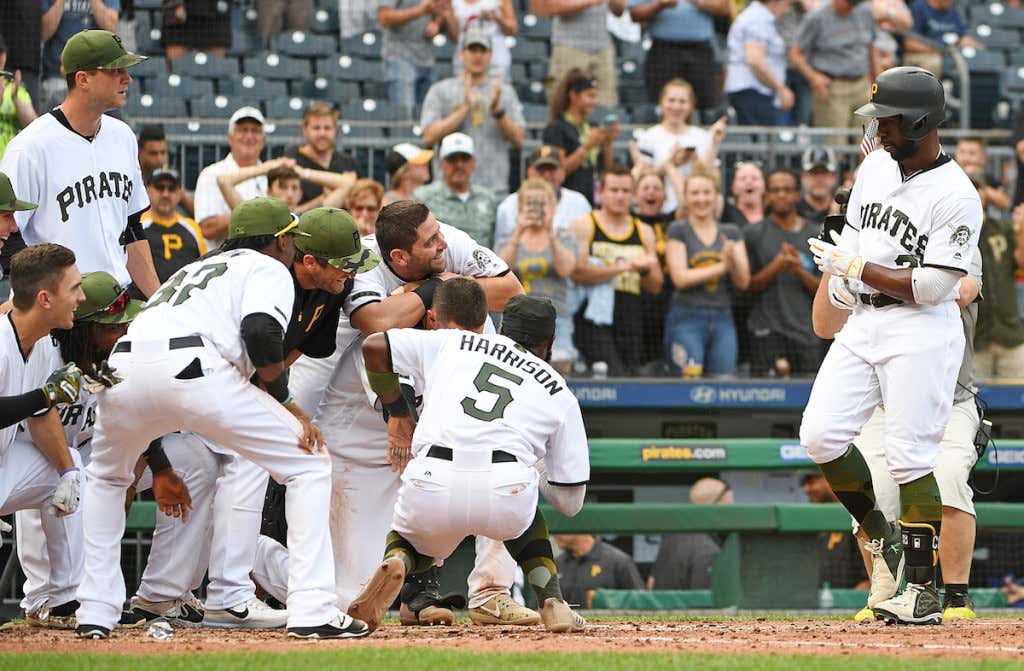 Pitchers don’t like giving up home runs. Giving up home runs is actually bad. We just saw Hunter Strickland throw at Bryce Harper yesterday, which sparked a brawl, for a home run that Harper hit off of him THREE years ago. Jose Bautista sparked the whole bat-flip debate after his postseason homer against Texas in 2015, which was an awesome moment that led to the Make Baseball Fun Again movement.

So, the thing about bat-flips is that more often than not, the game isn’t over when they happen. If you’re a pitcher and you give up a bomb to a guy in the seventh inning and they flip their bat, that’s going to piss you off nine times out of ten, maybe more. I’m of the belief that if you don’t like it then don’t give up a home run in the first place, but not many folks subscribe to that line of thinking.

And then there’s also the whole timing issue, like when Bautista flipped his bat after hitting a home run against the Braves a couple of weeks ago when the Blue Jays were still losing 8-4 in the 8th inning. There’s a time and a place, and that wasn’t it. Bautista wore one for that, and also because he was staring out at the pitcher, too.

The only problem with this is that there was retaliation and big time backlash, which I thought was completely stupid. Evan Grant of the Dallas Morning News wrote a story on Fielder prior to the 2015 season, and the big man talked about that walk-off celebration and how poorly it was received throughout the league.

Veteran San Francisco reliever Bobby Howry called the celebration “unacceptable.” Giants hitting coach Carney Lansford called it a “mockery.” The Los Angeles Angels chimed in with perpetually sour John Lackey saying he “didn’t care for it.” Torii Hunter, then with the Angels, admitted he laughed after seeing the celebration, but also said if the incident had happened against his team, “he’d get crushed and then we’d try to fight him.”

The words stung. When the teams met next six months later in spring training, the Giants’ Barry Zito hit Fielder with his first pitch. It was especially painful for Fielder to be criticized by his peers. As the son of a former major leaguer, he grew up inside baseball’s cloistered community and thought he understood all the rules, written and otherwise.

“He does care how he is perceived by his peers,” said longtime best friend Tony Gwynn Jr. “He is a sensitive dude. It bothered him.”

What Fielder never could process — still can’t — is how he has ever disrespected the game. The entire team participated in the celebration. It was planned for whoever hit the first walk-off of the season. It just happened to be him. And he didn’t stare at the ball, never does. He runs hard on homers and groundouts. He runs hard and slides hard into second base every time. He shows up and plays every day the way very few players do. Between the start of his first full season in the majors and the homer celebration, only Jeff Francoeur and Adrian Gonzalez played more games than Fielder.

“After the homer, I started to get bitter,” Fielder says. “I didn’t see how if I played hard and played right, how celebrating — after the game was over — giving my team a win was insulting the integrity of the game. … It didn’t make sense to me. It still doesn’t.”

Kind of a longwinded way to illustrate that creative and flashy walk-off home run celebrations probably won’t go over well if they become a thing, but fuck that. Why not? Enough with the whole “respect the game” shit. Baseball fans are old as dirt. That’s why they don’t like stuff like that, because that’s not how Ted Williams and Joe DiMaggio celebrated their home runs. Well, guess what? They’re dead. And the game of baseball will be too if they don’t find new ways to attract younger fans.

And I’ll be honest with you, I wouldn’t have even blogged the McCutchen walk-off homer if it weren’t for the celebration. I love McCutchen as a player, but the Pirates are in dead last in the NL Central. In the grand scheme of things, that walk-off homer doesn’t mean much on a general MLB scale. But we’re talking about it today because the guys decided to actually have a little fun afterwards. Fun is good. I think we lost that in translation somewhere as far as those unwritten rules of baseball go.