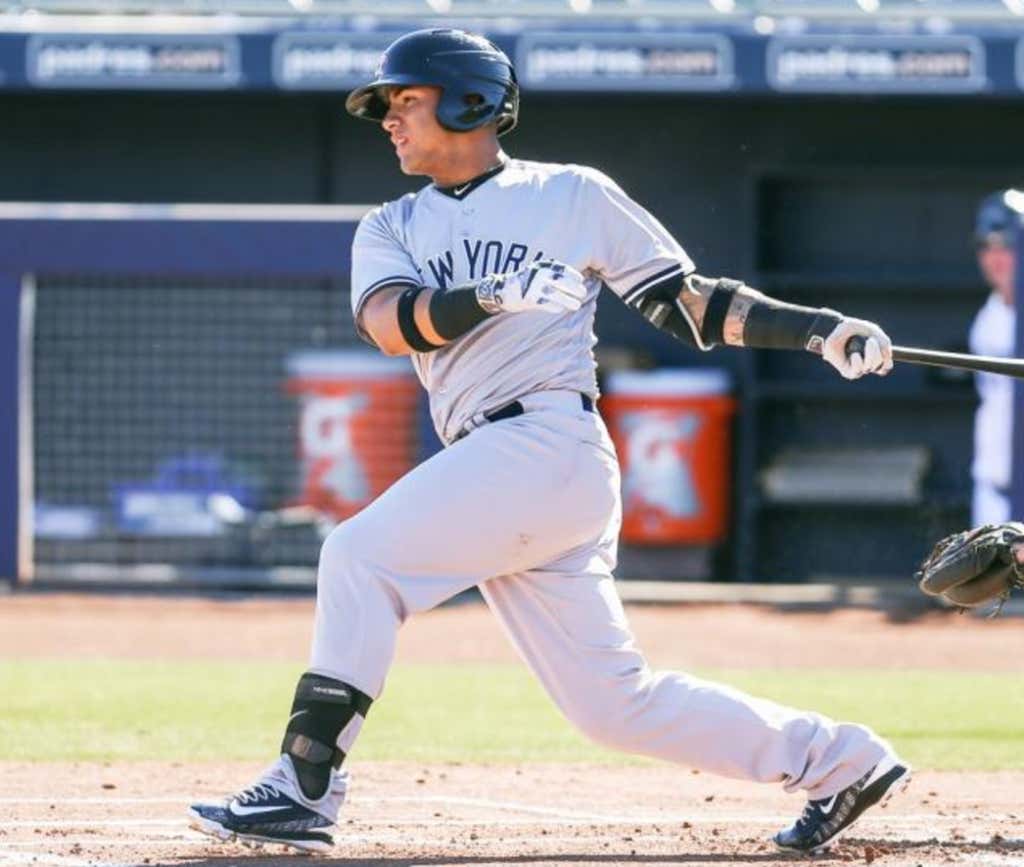 As the Yankees continue to wreak havoc against major league baseball (minus the Astros) we can quickly forget about all that awaits in the depths of the minor leagues. It’s sort of hard to believe with all of the young talent that is already producing in the majors this year that there are reinforcements ready to rock sooner rather than later. Let’s check in on how they’re doing…

Gleyber Torres: Mainly SS, but some 2B and 3B (Aroldis Chapman Trade)

The golden prince of the Yankees’ farm system is fitting in just fine in his digs in Trenton. After a bit of a sluggish start, Torres has his average up to .286 on the season and over his last 30 days is hitting .313 with three homers and 10 runs batted in. The big question with Torres was where would he play when he finally gets called up to the majors. Will he be better than Didi in the long run? Of course, or at least the hype train that goes along with Gleyber says so. But having said that Didi has been wonderful at the shortstop position and has more than overachieved with the bat so there’s no need to move him. At second base Starlin Castro has arguably been the AL MVP thus far in 2017 so you’re not going to fuck around with him. That leaves us with third base and the error machine that is Chase Headley. After a hot start with the bat, Chase has cooled off big time, and if not for his bases clearing triple on Sunday, he’d be on more of a hot seat than he currently is. His offensive production has dipped badly and his fielding has been an absolute atrocity. After last night’s incredible double error, he’s up to nine fuck ups in only a month and a half. When Torres comes up, I expect him to replace Headley at third for good. A tell-tale sign Gleyber is on the verge of a call-up will be when he starts to primarily play third base instead of shifting around the diamond like he currently is.

Along with the red rocket Clint Frazier, Justus Sheffield was the other major piece when New York traded away Andrew Miller last year to the Indians. Having just turned 21 last week, Sheffield has plenty of time to become a star and mainstay in the Yankees future starting rotation. He’s short, listed at 5’11”, but pitches like he’s 6’5 based off of his stuff. After starting out RED HOT in his first three starts (1-0 1.58 ERA 16 strikeouts) the southpaw has come back to Earth and has struggled quite a bit. Sheff has been adamant he doesn’t want to waste his years getting ready for the majors, and instead wants to get up there as soon as possible. You can’t hate that mindset, but he’s going to take some time. He has the stuff to pitch in the majors there is no question about that, but he still needs to learn how to pitch and mix his speeds effectively. The slider is coming along, but still needs work and his use of his changeup will be a key factor in him taking a big step towards the big leagues. I’m not expecting to see Sheffield until at the earliest next April, but that may even be a bit too quick.

After a brutal April, Frazier has really started to turn it on in May and is rounding into the form we expected to see. In the month of May the Ginger Jesus has hit .286 but has already matched his April RBI total. Of course, Clint hasn’t lost his edge and is still breaking bats over his knee.

Although his numbers are on the rise in AAA, I wouldn’t expect to see Frazier in the big leagues this year. There’s just no room for him in an already cluttered big league outfield. Girardi is having a hard enough time getting Aaron Hicks consistent at bats so there is no reason to bring up more outfield help. Now, this could all change if an injury comes to fruition and throws a wrench in the expected plan. I would not be surprised at all if Frazier is the center piece surrounding a deal for a big time pitcher like Quintana or Darvish. He’s got an attitude and cockiness to him that usually doesn’t sit well with the Yankees organization. He’s very, very good, but with a crowded major league outfield and the threat of Harper coming over in two years I could definitely see Frazier elsewhere if it means a top of the line starter coming to the Bronx.

Chance Adams SP (Next Up)

Chance Adams is the next name you will see be called up to the major leagues. Similar to Jordan Montgomery’s minor league career, Adams has dominated from the get-go. In 2015, his first year, Chance compiled a 1.78 ERA over 35 innings of multiple levels of A ball. Last year, split between high A ball and AA, in his first full season, he went 13-1 with a 2.33 ERA striking out 144 men. Beginning this year in AA ball, Chance was stellar going 4-0 with a 1.03 ERA in six starts. Those performances earned him an early season promotion to Scranton where he made his debut a few days ago. In that debut Adams tossed five shutout innings allowing two hits, three walks, and struck out six. He possesses a four pitch arsenal which consists of a mid-90’s fastball with a plus-changeup, plus-curveball, and plus-slider. If not for CC Sabathia’s stellar outing earlier in the week we may have heard the name Chance Adams A LOT more right now. That being said, if Adams continues his dominant pitching and CC has a few more bad outings it’s going to be tough to turn a blind eye to what’s going on. If there is one thing that is holding Adams back from becoming a must-promote it’s his location. In his seven total starts this year Adams has reached the seventh inning only once. He reached 97 pitches after just five frames in his AAA debut which cannot continue to be a trend if he’s going to be a big league pitcher this year.

Rutherford just turned 20 years old, so he’s a little bit of a ways away, but he’s going to be a stud whenever he gets to the Bronx. The ideal plan is to have an outfield consisting of Rutherford, Harper, and Judge in the year 2020. If that comes to fruition then you we’ll just be doing the ’20s Yankees all over again, just a hundred years later. So far in the A ball Rutherford is hitting a cool .289 with a homer and 15 RBIs. During a recent nine game hitting streak, Blake is mashing at a .382 clip.

I’ve always been a big time Tyler Wade guy and I advocated for him to be the starting shortstop while Didi was sidelined. Thankfully I’m not a GM (yet) and Ronny Torreyes was dubbed for that job in which he thrived in. Now in AAA he’s continued his hot hitting, currently sitting at .319 on the young season. What’s more impressive is where he’s played on the field in his 34 games : SS(22) 2B (6) 3B (3) LF (1) CF (1) RF (1). If Headley continues to struggle offensively while continuing to be a terrible defensive third baseman then Girardi will have to make a call on what to do. We can’t continue to hold our collective breathes every time Chase winds up to throw across the diamond. If Gleyber isn’t ready to be promoted when that time comes, then Wade could certainly be the man for the job.

Obviously couldn’t touch on everyone that’s important in the system, but I think I gave you guys and girls a good insight into what’s going on.

I’m on Twitter @ehubbs13 if you want to bash my Clint Frazier trade bait. Go Yanks