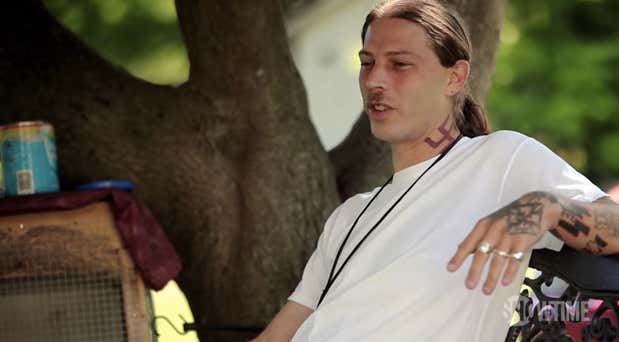 Source - A Pennsylvania resident with a penchant for naming his children after Nazi figures has officially changed his surname to Hitler, local news site MyCentralJersey.com reported. “It’s great. My driver’s license is changed over, my insurance, my registration, all that I needed is changed over,” Hitler told MyCentralJersey.com. “I’m the new Hitler.” In March, a Superior Court judge in Hunterdon County, New Jersey, approved Hitler’s name-change request. The change took effect May 8, which was V-E Day (Victory in Europe Day), marking Germany’s surrender in 1945.

The tattooed neo-Nazi, who now lives in Shippensburg, Pennsylvania, stepped into the news spotlight in 2008 when a New Jersey market refused to put his then-3-year-old son’s name, Adolf Hitler, onto a birthday cake, according to NJ.com. “I think people need to take their heads out of the cloud they’ve been in and start focusing on the future and not on the past,” Hitler, a former resident of Holland Township in Hunterdon County, said at the time. He has nine children with at least four mothers but now has custody over none of them, according to the Anti-Defamation League and NewJersey.com.

He again roused the attention of the media in 2013 when he showed up at a visitation rights hearing wearing a full Nazi uniform. Hitler was featured in the 2014 Showtime documentary “Meet the Hitlers,” about people who are named after the German leader or had changed their names to Hitler.

Listen, do whatever makes you happy. If you want to change your name to Hitler who am I to judge? And besides, maybe he was naming himself after a different Hitler. Did anyone even bother to ask him that? Nope, you just jumped to conclusions. He struggled through the RMV and insurance to make this happen. Let Hitler have his moment.

Wait, what’s that? Oh, he has a gigantic Nazi tattoo on his neck? Yeah- fuck this guy.

“I think people need to take their heads out of the cloud they’ve been in and start focusing on the future and not on the past.”

Outrageous quote for a guy whose head is stuck in 1940’s Germany. Also how does he have NINE children with four different women? He’s like Young Joc. Scumbags always get the most ass. It’s not fair. He’s not bad looking either. He just needs to cut his hair, get rid of the tattoo’s and lose the burning hatred of non-aryans.

I used to get embarrassed when my dad would come up and talk to me in a group of friends. His kids have to deal with dad showing up to school in a full-blown Nazi uniform costume.

Weird move by Showtime calling their documentary “Meet The Hitlers.” I’m sure this wasn’t the Meet The Parents spin off Ben Stiller was expecting. But hey, a kick back is a kick back.

PS: Jiminy Glick grilling Mel Brooks on his beef with the Nazi’s is one of the funniest things on the Internet.