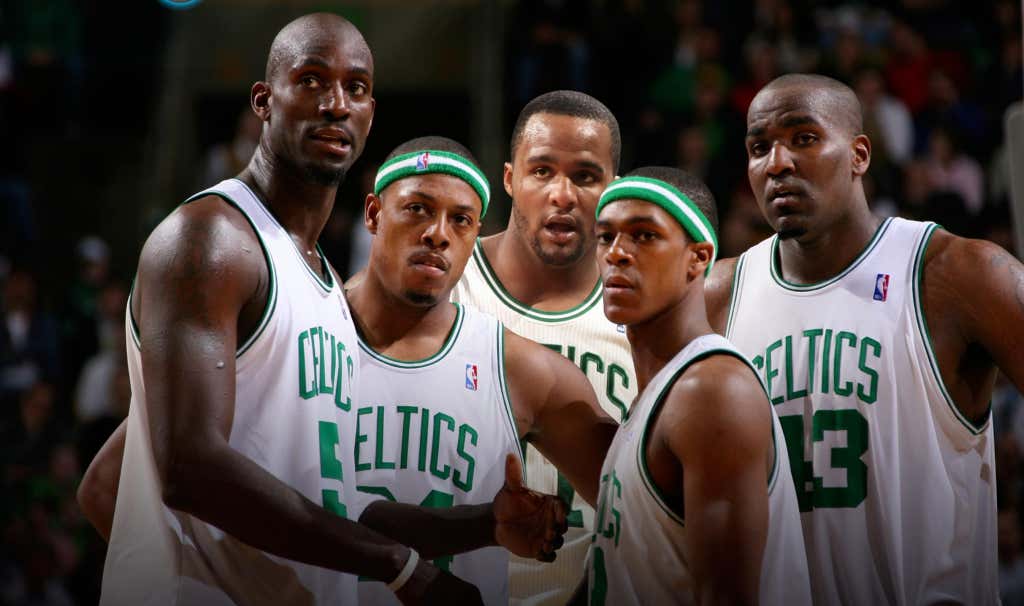 It’s hard to put into words how incredible this was last night. For anyone who is a fan of this team or the NBA in general, this was everything we could have hoped for and more. They were honest, they were real, and without a doubt did this live up to the hype. There are so many good parts it’s hard to pick a favorite, but the following things stood out to me

1. Kendrick Perkins has a Top 5 voice

This might be the first time I ever heard Kendrick Perkins speak and honestly that’s a damn shame. What a voice. The perfect southern drawl was incredible. You could tell Perkins is just a laid back dude from Texas who just wants to chill with his boys and take it easy. All this show made me feel was sadness over the 2012 trade all over again. Love Perk. Put prime Perkins on this current Celtics team and look out.

2. Rondo wasn’t wearing anything on his injured thumb

Innnnnnteresting. Maybe he’s always had nothing on it since the series ended and it’s no big deal, but this is the first I’ve seen him and Game 6 was just over a week ago. Shouldn’t there be a brace? Obviously Rondo was hurt but it’s wild if he’s already out of a brace a week later how he possibly could have been so hurt that he couldn’t play. I’ve seen this dude play through crazy shit so it sparked my attention. Looked like he was wasn’t feeling any pain while sitting in a chair holding a basketball which is clearly the same thing as playing in an NBA playoff game.

3. Big Baby’s reaction to Doc Rivers was the perfect level of awkward

Paul, Kevin, Perk, even Rondo was happy when Doc showed up on that screen. And then there was Big Baby’s reaction. 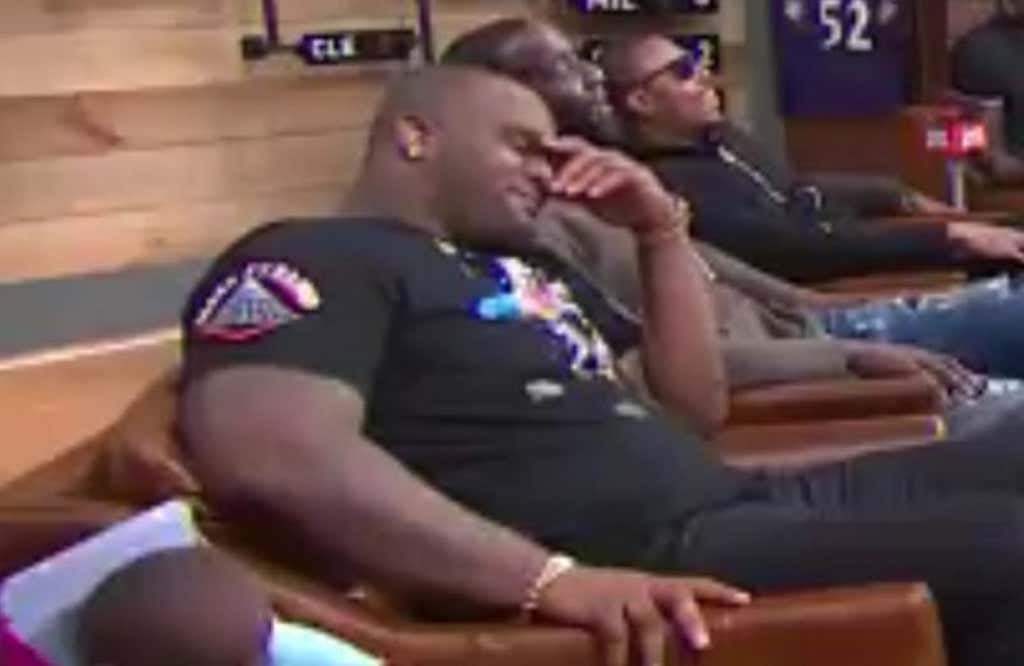 See Doc and Big Baby never really got along. Doc hated how Baby played at times, especially when he shot threes

and Big Baby has gone on to say how he feels like Doc is overrated as a coach, that he lucked into a title and all this stuff. Clearly not a fan of each other. Rewatch those clips and just look at Davis. The awkwardness is palpable.

All the power to the Truth. Just capped off a Hall of Fame career, 19 years in the league, numerous accolades, all time moments, you damn right he’s going to be high as hell on his Truth Tour (allegedly). The shades obviously a dead giveaway, but nobody has ever been more comfortable sitting in a wheelchair than Pierce was last night. 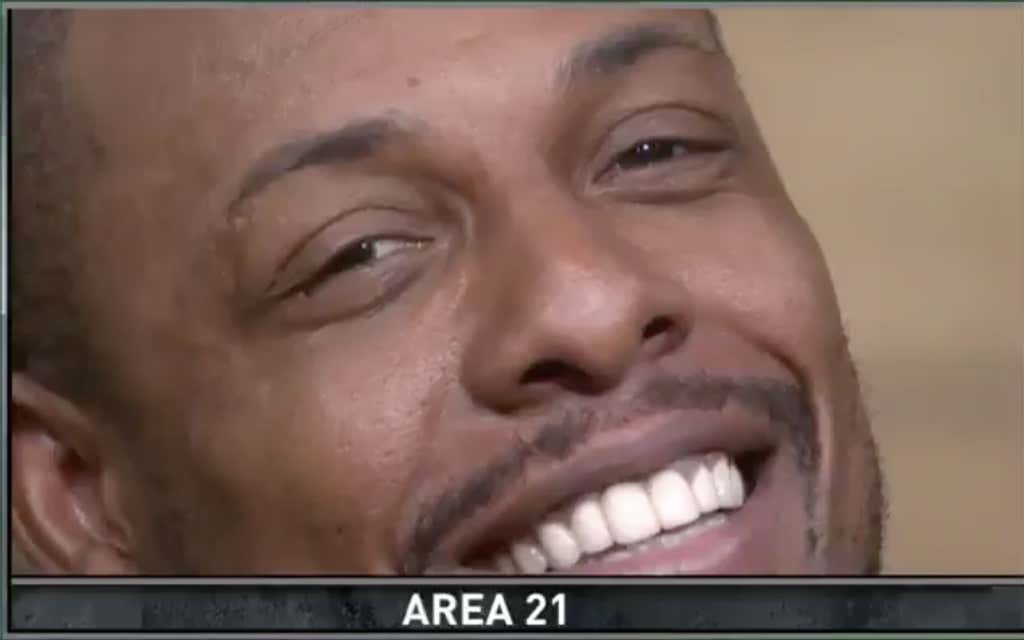 And also quickly about that wheelchair joke, I’m not laughing. I don’t find that very funny at all. Why? Because that was one of the scariest, most depressing times of my entire life. The Celtics finally got to the Finals for the first time in my life, and our franchise player collapsed to the floor and had to be carried off the court? If you weren’t shitting your pants during this moment then you my friend are a dead person

5. I thought the segment on Ray Allen was heartfelt

Everyone knew the elephant in the room was the topic of Ray Allen. I wasn’t sure how this topic was going to be handled because I always looked at the situation like it was KG and Rondo that were the most hurt/spiteful. They’re the true leaders of the grudge. Pierce was more understanding but didn’t really want to get involved, and Perk was mad because his boys were mad and Perkins will always have your back.

What we learned was that everyone was truly sincerely hurt by what happened. I thought they were extremely honest at a time when they didn’t really have to be. We could have gotten some PR answers that didn’t get specific and beat around the bush, but we got the exact opposite. They felt betrayed, you could hear the disappointment in their voices. I don’t think any of them wish this is how it was, but at the same time I can’t blame them. It was sad as shit to hear Pierce say he hasn’t talked to Ray in years. Their wives sat next to each other at every game next to Ray’s mom. It all sucks, but that’s what happens when you leave to go play with Lebron.

What the hell Danny. Now I understand what all those people were upset about at the trade deadline. How can you stand pat? Pierce came out and said he wish he had it. It costs you nothing! Now wait, what if you sign him on…….Wednesday. Surely there’s some NBA backroom dealing you could do to get him active. Then we can relive this blog.

7.  Hearing Pierce talk about how he always thought he would be a Celtic for life was emotional

This probably hit me the hardest from the whole night. I’ve always considered Paul Pierce my generation’s Larry Bird. I hoped much like Bird, we would never see Pierce in a different uniform. He was always different from KG and Ray in that regard. When I saw the SI cover of that BKN team, I lost it. To hear that he knew it was over after losing to NY also wasn’t great. Fuck that series.

If nothing else, this gave us a look into the type of relationship these guys have and how everyone fits in. Rondo keeping his mouth shut for what seemed the entire night showed just how quiet he is. Even Perk was telling the man to speak from the heart and show emotion. But at the same time KG knows exactly what that silence means and he plays the more outgoing role. You know how every group has the main guy? That’s Pierce. Then there was Big Baby who probably wasn’t allowed to talk when they played you could see minded his own business until KG told him to chime in. This was just a really interesting dynamic.

9. There are a couple guys I wish were on it

Obviously Scal. Need to see Scal with this group. Those stories must be gold. I also would have liked to see James Posey. I think lost in that team’s success was James Posey, who was really the glue that played a major role. He had his second highest FG% and third highest 3P% of his career as a Celtic, and came in with championship experience which obviously helped set the tone.

10. Too bad we didn’t get to hear about a few of these things

– Kobe and the Lakers (other than KG saying they shoulda swept) 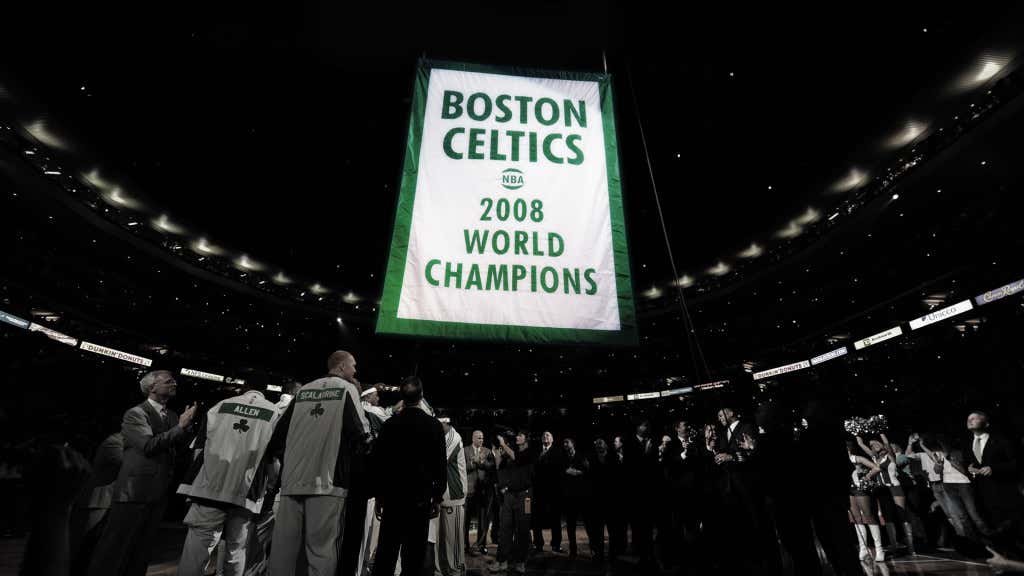