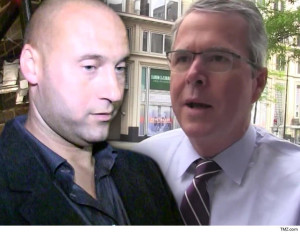 NYDN – After expressing strong interest in becoming an MLB owner during his playing career and in retirement, Derek Jeter is one step closer to his wish coming true. The group led by the Yankees legend and former Florida Gov. Jeb Bush won the auction for the Miami Marlins, currently owned by Jeffrey Loria, Bloomberg reported Tuesday afternoon. The purchase price is not yet known, the report said, but the group still needs at least 75% of MLB owners to approve the decision for it to become official.

Derek Jeter is very close to becoming an owner of an MLB franchise, within 3 years of retiring from the game. Normally you see a player like Jeter take some kind of role within the organization he spent his career playing for, but that wasn’t enough for Derek. He said from the beginning that he wants to own a team and the Yankees won’t be for sale, any time soon.

The last step is to get a 75% approval from the owners but anything less that 100% would be a shock. The Bush family has already owned a franchise so Jeb has the resources to get the job done, so there should be no concern there. Jeter on the other hand, was the face of the game for almost 2 decades. For the MLB this is a great story about the opportunity created by playing the game, that a minority player can go from the field to the owners box. Yeah his dad was a doctor and he didn’t struggle much in life, but the story works better if you leave that stuff out.

This is great for the game, but it’s also great for Yankee fans. We now have a 2nd team to cheer for that plays the Mets 19 times a year. Can’t wait until the first time KFC loses his shit over Jeter in Miami.

PS: I would’ve guessed this would take 5-10 years to happen. Maybe take a role with the Yankees to learn a little bit then look into buying. I think the baby coming made him say “I gotta get a job and get out of this house.”