Warning: This gets graphic. 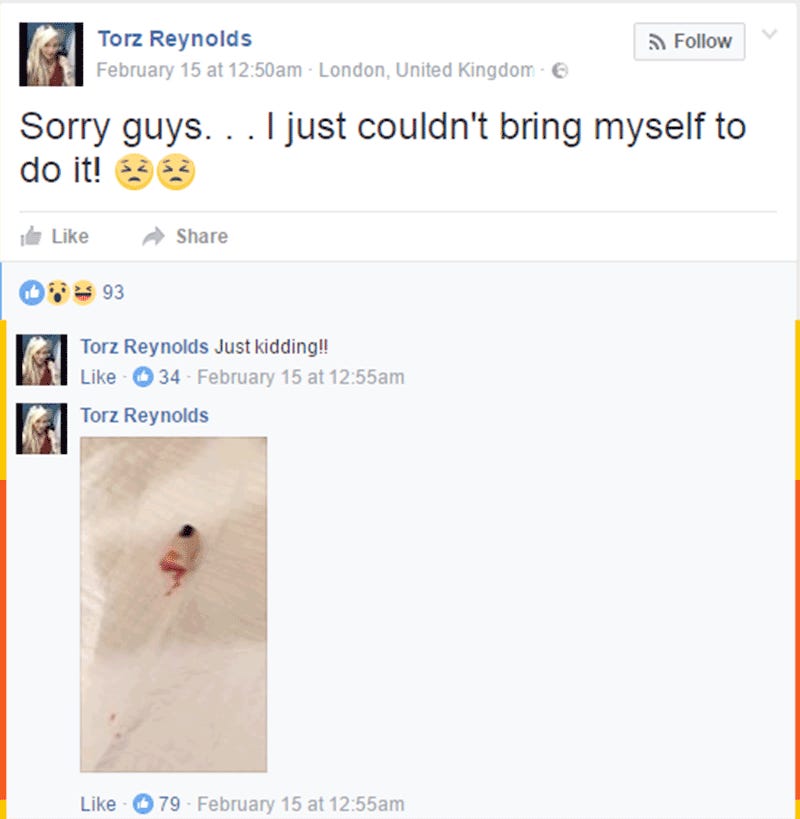 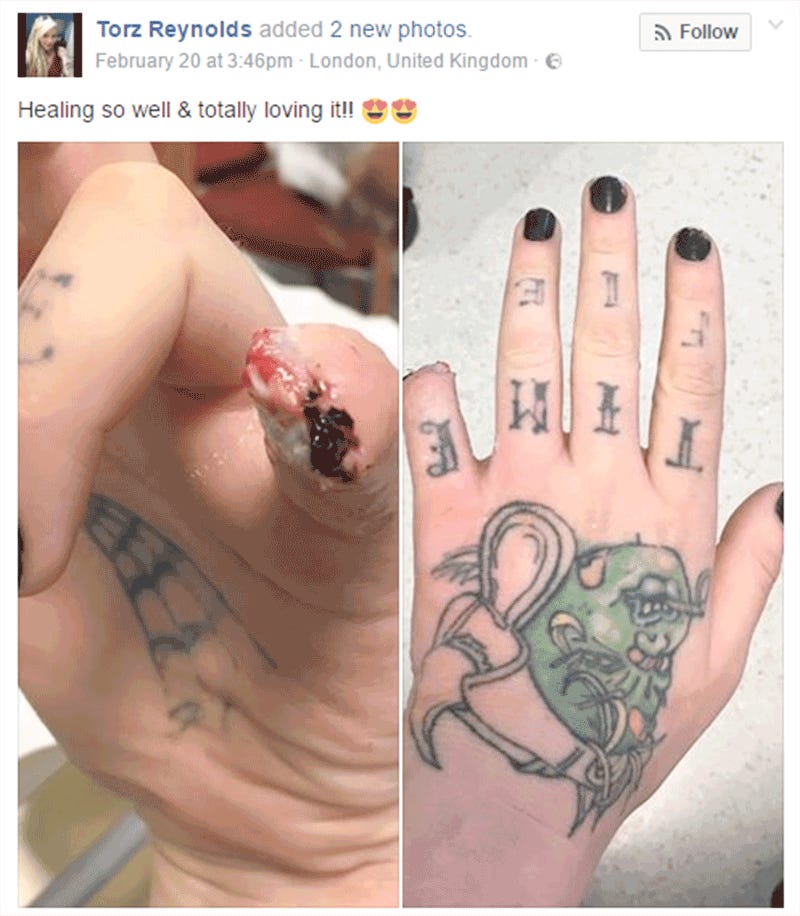 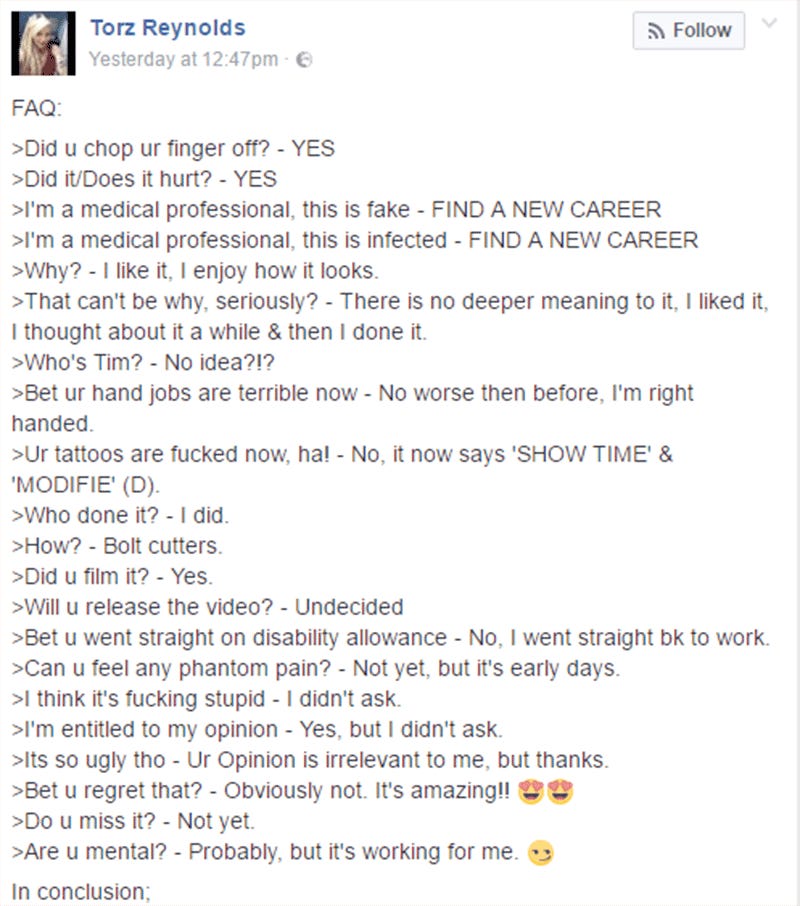 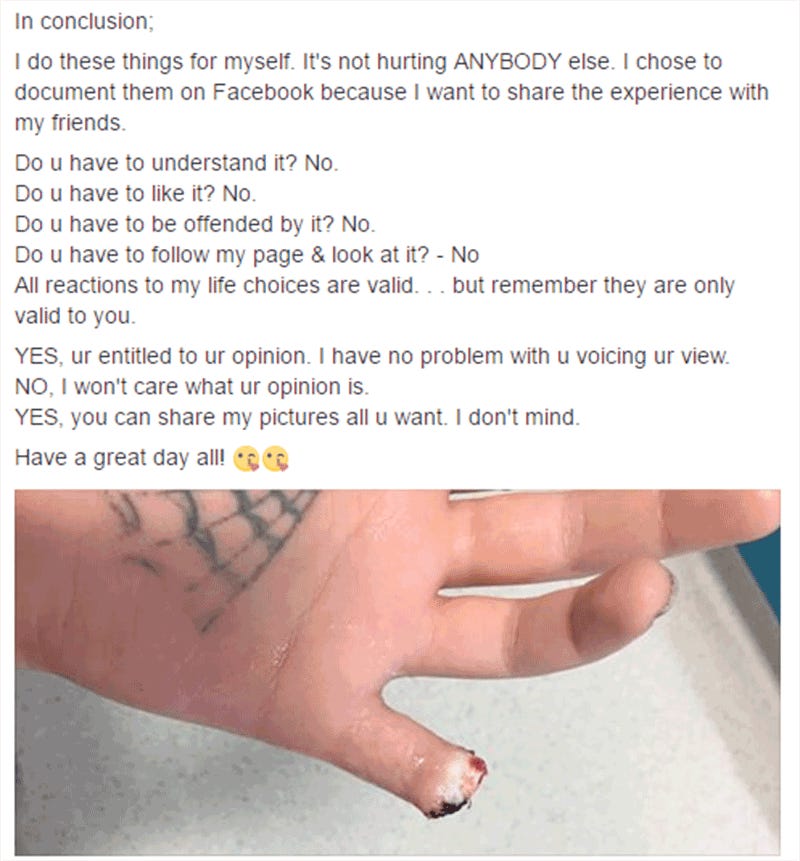 MTO – A 30-year-old woman from the United Kingdom came up with a new way to get more FACEBOOK FOLLOWERS – she cut off her own finger live on social media.

The 30-year-old body piercer cut off her pinky finger and documented the entire process on Facebook because “she wanted to.” She also was trying to increase her Facebook followers.

About a week ago after deciding to do it, she counted down the days – until she finally did it.

So you know what man…good for her. She said she would do something, she did it. Would I personally advocate maiming yourself for social media attention? No. But that’s me. I do believe in the freedom to do things you want to do when it doesn’t affect others and, in this case, that applies to both the finger slicer and the people following her because WHOA WHO KNOWS WHAT SHE’LL CHOP OFF NEXT? If that entertains people or if it fulfills her in some way to have a sad little nub on her hand then whatever man. Hell I’ll go so far as to say the little “I’m not gonna do it” thing and the joke about handjobs was a quality bit of showmanship. YES this is stupid NO it doesn’t affect me in any way NO I wouldn’t want you or anyone I know to do something this stupid for attention YES I would be curious to have seen how exactly she chopped it out NO I still won’t go out of my way to do that.

Also far be it from me to compare chicks chopping off their fingers to religious figures but what do you think Jesus would do to build his following if he existed in 2017? If you think it wouldn’t involve firing up that Instagram Live for some live-streamed miracles, you’re sadly mistaken. This girl’s doing the same thing only her miracles involve self-mutilation for no particular reason when no one really wanted to see it. Two sides of the same coin IMO.