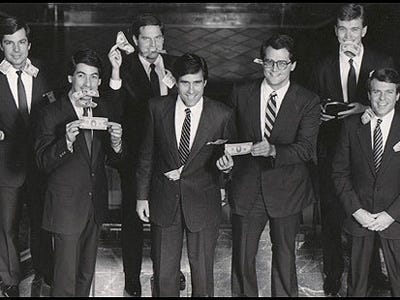 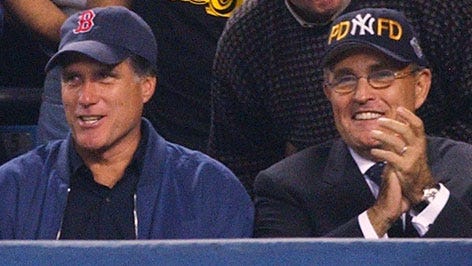 Source – Mitt and Tagg Romney and family are bidding to buy a small stake in the Yankees months after their try for the Marlins stalled. They’re expected to pay $25 million to $30 million per point and thought to be interested in one or two points. The Yankees are valued around $3 billion or more. The Romneys are said to have offered $1.4 billion many months back to buy the Miami Marlins. But that appears to be off the table now, as the Romneys are talking about buying a very small piece of the Yankees instead. “No comment,” said Marlins president David Samson on the Romneys’ try for the Marlins. If Romney completes the purchase of the Yankees piece, that would seem to take him out of the Marlins picture. There are multiple other groups showing interest in the Marlins, sources say.

Kind of an interesting story out of nowhere today as it appears Mitt Romney and one of his 76 sons is trying to buy a piece of the Yankees. It’s not really a huge surprise given that Mitt always seemed to be a genuinely big sports fan. He tried to buy the Marlins a couple months ago, his kid worked in marketing for the Dodgers and his company Bain Capital once proposed to the NHL in 2005 when it was financially failing a new model of sports league where they’d buy a controlling stake in every single team and run the NHL as a single entity (after Mitt had left the company, but still.)

Do I think Mitt Romney would make a good sports owner? Yeah I do. He has a proven track record of running successful organizations whether it be businesses, the Olympics or state governments. You don’t become a gazillionaire investor or Republican nominee for the presidency by not being smart and competent. And given that being a defeated presidential candidate is about as boring and useless of an existence as someone can have, he probably doesn’t have a whole lot to do right now besides write books and punch holes in the wall whenever the TV turns on. So I think Mitt will someday own a sports franchise and do a good job at it.

But as a Yankees fan, I’d rather be dead, cold and buried the ground before I see a fucking Masshole as an owner of the New York Fucking Yankees. I don’t care if he was raised in Michigan, he was the governor of Massachusetts. There is no goddamn way if George Steinbrenner was alive that he would allow someone who was the governor of the nexus of Red Sox Nation EVER so much as buy a luxury box in Yankee Stadium, let alone a piece of the team. The Sox-Yanks rivalry might be in hibernation right now but with both teams loaded with young studs like Gary Sanchez and Andrew Benintendi, it’s going to be roaring back sooner than later. Mitt was governor in 2003, when Massachusetts and New York were mortal enemies. The camera panning up to see him sitting in the Yankees owners box during the 2019 ALCS would be like watching Fidel Castro waving an American flag during the Olympics. Some things just aren’t right.

PS: This is sneaky one of my favorite clips on Youtube. And in a completely not-political observation that has nothing to do with my personal opinions, if Mitt showed an inch of the personality in 2012 that he showed here, he’d probably be President right now.