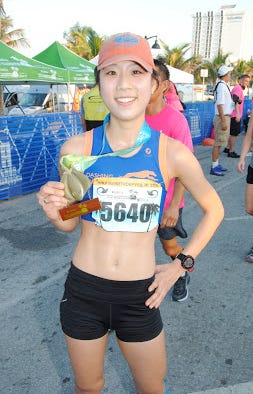 Miami New Times – Jane Seo blazed across the finish line at last weekend’s Fort Lauderdale Half Marathon with a stellar time of 1 hour 21 minutes. The professional New York food blogger’s blistering 6:15-per-mile pace earned her second place among the thousands who raced. Seo paraded around the finish line while grinning and gripping a gaudy medal.

But her pace, it turns out, was too good to be true. Seo has now been disqualified for cutting the course — a crime she confessed to only after a computer sleuth crushed her elaborate coverup. A lengthy post published on marathoninvestigation.com documented her lies in exquisite detail. She later posted a four-paragraph apology to her 34,400 Instagram followers.

“I made a HORRIBLE choice .. what an idiot I was!” she wrote in a post that’s since been taken down. “I am extremely ashamed … I am so sorry everyone.” 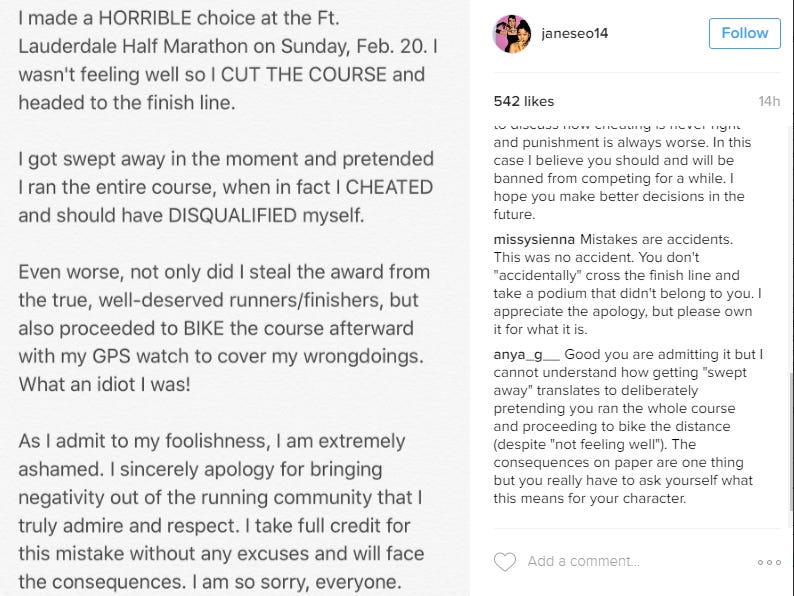 I don’t like to exaggerate or speak in hyperbole but I feel very confident saying this: this is by far the wildest story I’ve ever heard about a food blogger getting caught cheating in a half marathon by a part-time marathon investigative watchdog. Ever.

I mean you gotta read this whole thing. It’s like a Hollywood script. Well I’m actually not sure how many studios would greenlight a movie about a Huffington Post blogger running a half marathon in Florida but still, you get my point.

Suspicions arose almost immediately after Seo, who is 24 and writes regularly for the Huffington Post, crossed the finish line in the 13.1 half-marathon division Sunday. Race timer Josh Stern quickly noted that her timing chip logged unusually fast miles in the second half of the race, when runners often slow down rather than dramatically speed up. He confronted Seo, who persuaded race director Matt Lorraine to keep her listed as the number two finisher, with her time just under 1 hour 22 minutes.

But after the race, someone tipped off Derek Murphy, a business analyst by day who has become the world’s best internet sleuth at busting cheating runners.

(What a tagline!  Business analyst by day.  “Internet Sleuth” by night, you know just in his free time, oh and he is very, very specialized – focuses on busting marathon runners who try to fudge their times.Talk about a hobby.)

He began digging into Seo’s time and soon came across a prime piece of evidence: a photo of her at the finish line that clearly showed her race-tracking Garmin watch. He enlarged the photo, which showed the watch matched her time of 1 hour 22 minutes but also showed she had covered only 11.65 miles — nearly two miles short of the full race.

Murphy also posted the math on what Seo’s mile-by-mile splits would have been:

Very few, if any, runners could shave a minute and a half off their splits in the second half of a race. But there was more evidence.

Seo, who like many runners posts her activities on Strava.com, later in the day posted mile-by-mile records of her traversing the entire 13.1 miles, most of which run along Fort Lauderdale Beach. But Murphy discerned that the cadence numbers were more in line with a person on a bicycle rather than a runner.

Through the Flyby screen, I was able to confirm that she actually covered this course in the afternoon — long after the race was complete.

Seo later admitted she’d gone back and biked the whole course to cover her tracks by GPS.

Murphy’s site has been blowing up since exposing Seo’s lies, and commenters on the web are excoriating Seo, a Harvard grad who regularly writes about food and culture. Her trip to South Florida was partially sponsored by Fort Lauderdale tourism site Sunny.org, Murphy said.

“Had she just admitted what she did, I never would have heard of her, nor written about her,” Murphy said. “But going back and biking the course to cover up… that’s unheard of.”

Murphy, based in Ohio, began his site two years ago to investigate claims of malpractice by runners aiming for the Holy Grail: attaining a qualifying time fast enough to be eligible for the Boston Marathon. He has even used Google Earth in one case to prove a runner’s “innocence” to claims of course-cutting.

He said he spoke to Seo Monday, who maintained her innocence, and traded emails with Stern and Lorraine. He broke his story of her cheating Tuesday.

“While I am glad that she eventually admitted to cutting the course and trying to cover her tracks, she only posted this after information was relayed to her regarding the extent of the evidence against her,” Murphy wrote on his site.

Fucking Jane Seo (very ironic name for a Huffington Post blogger, internet nerds know what I’m talking about). Nothing I love more than a good fraud gets exposed story.