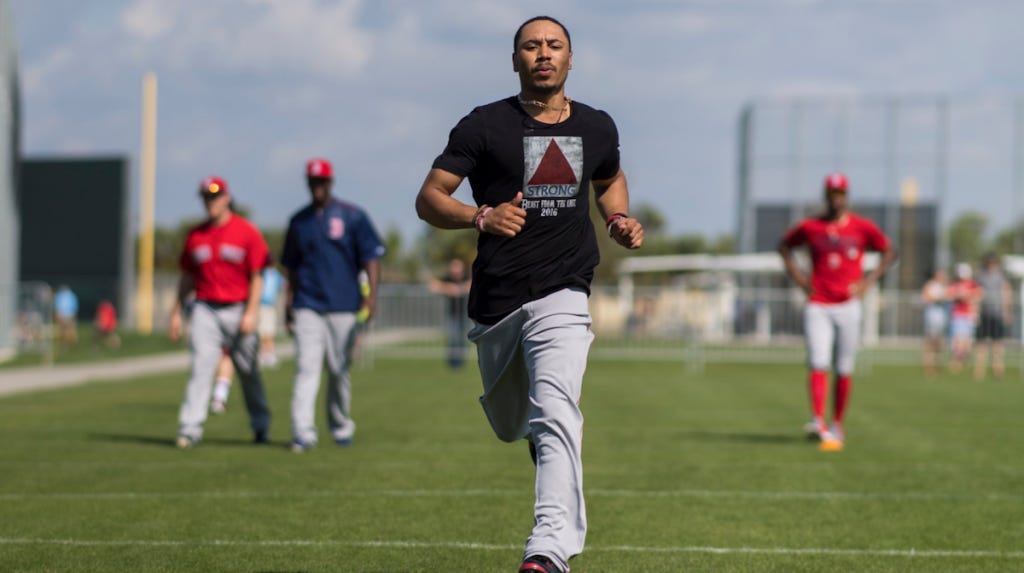 Mookie Betts — It depends on who you ask, but there is a solid crowd within the baseball community who would tell you that Mookie Betts should be arriving at Red Sox spring training camp as the reigning American League MVP. The MVP debate gives me a headache, especially now that the stat geeks have essentially taken over and turned it into the WAR Award. Either way, what a fucking season for Mookie last year, becoming the first Red Sox player since Ted Williams to hit 30 home runs and drive in 100 runs before their 24th birthday. As mentioned in the video above, his 9.6 WAR trailed only Mike Trout for the major league lead.

Based on his performance last year, you’re talking about a guy who has a really strong case to claim that he’s the best overall player in Major League Baseball right now behind Trout. It’s very much a “what have you done for me lately?” type league, so this narrative could easily change at the end of this season, OR…hear me out…could this be the year that Betts overtakes Trout as the top player in baseball, at least from a single-season perspective?

I know, I know. Trout is the best player on planet earth. Ability-wise, he’s better than Betts, and there’s no debating that. Even if Mookie had a better statistical season than Trout in 2017, Trout’s still the best player in baseball. In my opinion, it would take somewhat of a down year for anybody to overtake Trout for his single-season throne, coupled with having an outstanding season yourself, because a down year for Trout is still better than 95% of the league. Since becoming a full-time major league player in 2012, Trout has led the American League in WAR every single year, and was a full run better than Betts in 2016.

However, if there is a player in the game right now who has the overall skill set to give Trout a run for his money, it’s Betts. Offense, defense, base running — he’s the real deal. Or at least, he was in 2016. Can Mookie Betts continue to build on his superstar status in 2017? Can he make another run at the American League MVP award? Can he exceed the bar that he set for himself last season? Can he put together the best statistical season in the majors this year?

Jackie Bradley Jr. — When I went through the team’s storylines last spring training, Jackie Bradley Jr.’s was similar to the one that it’s going to be this year. Last year, we still weren’t really sure if Bradley could hit major league pitching. In 2015, he had a somewhat brief hot streak sandwiched in between two long cold streaks. That’s kind of, sort of what happened again in 2016, only his hot streak came a lot sooner, and the cold streaks weren’t as cold. Bradley hit .222 with a .586 OPS over his first 16 games, which is too small of a sample size to make that big of a deal out of, but that was before he started his 29-game hitting streak in which he hit .415 with a 1.271 OPS.

In the 111 games after the streak ended, which spanned 456 plate appearances, Bradley hit .234 with a .752 OPS. That OPS is actually pretty good. The average OPS for a major league centerfielder last year was .735, so Bradley was about average for a majority of the season, and well above average with his .835 OPS overall. It just didn’t seem that way, because his offense came off as underwhelming after what everybody saw him do over his hitting streak. Me personally, I thought Bradley was capable of more prior to the 2016 season, and he proved that he was, in fact, capable of more.

Well, you know what? Even after what he did last year, which earned him his first All Star selection, I still think he’s capable of more. He’s been wildly inconsistent, offensively, over his major league career, but this is a guy who I feel like, if he can put it all together, we’re talking about a superstar player. Not in the same sense as players like Betts and Trout, but for his own position, he’s capable of being one of the game’s top centerfielders. Bradley nearly tripled his career high in homers, launching 26 bombs and driving in 87 runs, so there’s a ton of power there, as well. Can Jackie Bradley Jr. hit at an All Star level from wire to wire in 2017?

Andrew Benintendi — The number one prospect in baseball. No pressure, right? Honestly, it’s probable that Andrew Benintendi legitimately doesn’t feel any pressure coming into this year. That’s all we read about Benintendi last summer was how he doesn’t feel any pressure, and how he’d treat a sandlot game the same way he’d treat Game 7 of the World Series. That’ll come in handy, considering he set the bar pretty friggin’ high after his major league debut last summer. In 118 plate appearances over 34 games, Benintendi hit .295 with an .835 OPS, and had an OPS of 1.111 in Boston’s brief three-game stay in the postseason last October. He is, by far, the most polished prospect that the Red Sox have in their system, and 2017 will be his first full season as a major league player. Will Andrew Benintendi become the superstar player that it appears he’s destined to be in 2017?