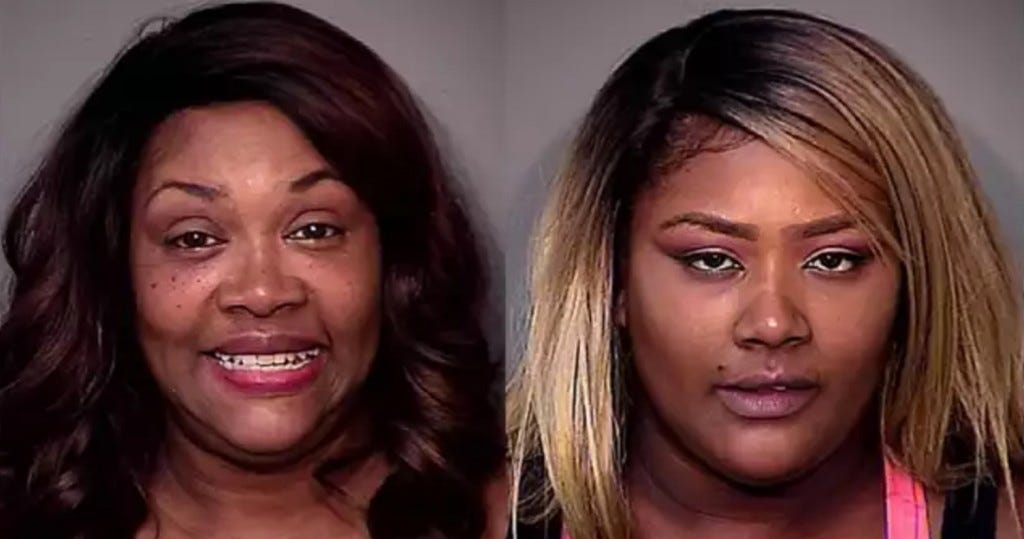 Click Orlando – Tanja Gammon, 57, posted an ad on Backpage.com advertising herself as a “sexy” mother with an “awesome attitude,” deputies said. An undercover deputy responded to the ad and Gammon told him it would cost $100 to spend 30 minutes with her, according to a charging affidavit. They agreed to meet at a Motel 6 on Irlo Bronson Memorial Highway.

When Gammon answered the door, she was only wearing lingerie, deputies said. Gammon attempted to seduce the deputy until the takedown team entered the room and arrested Gammon, according to the report.

Inside the motel room bathroom, deputies said they found Gammon’s daughter, 31-year-old Darcel Gammon. Darcel Gammon was serving as a lookout while her mother performed services, the report said.

Full disclosure: I definitely dyslexic’d the paragraphs at first and thought she tried to seduce the deputy knowing he was a deputy which would be an all time cocky mom hooker move. So that’s one point off the story overall. But I still enjoyed the entire setup here, a mother-daughter team going in Backpage with the mom fashioning herself as a Cool Mom with an awesome attitude…who just so happens to have her grown adult daughter playing lookout at a shithole Florida motel. That is not the kind of awesome attitude I expect from my moms but that’s me, I’m more of a “make your kid a PB&J with the crusts cut off” kind of mom fan rather than a “load your sloppy 57-year-old tits into lingerie and fuck someone at a Motel 6 while your daughter plays Candy Crush in the hallway” kind of mom fan. Though the legal lesson of “I didn’t take the money and thus it was not prostitution” was clearly a valuable one.

But hey I guess on the plus side it’s nice that the daughter wasn’t part of the hooker offering. To me though, if you’ve come so far as to be playing hooker lookout, you might as well throw sex with her in the pitch for some extra cash. From what I can tell neither mom nor daughter are prize pigs but at least with a mom-daughter whoring sale they’ve got a marketing gimmick.

Also I’m not a hooker guy and could care less either way but don’t cops have better things to do than worry about literal Mom and Pop shop hooker operations? I get it’s illegal and there are correlations to other crimes but this seems like a pretty no frills company, a real family owned small business. Worry about the Florida meth way more than the mother-daughter hooker pairings, that’s what I would do if I were the police chief.