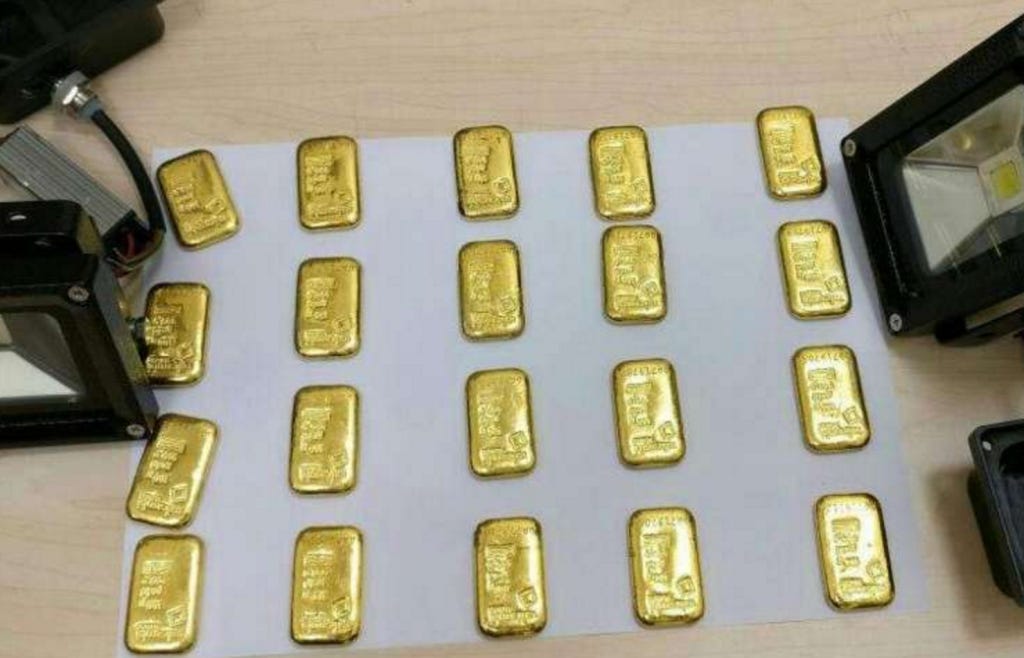 ST - A 36-year-old man was caught attempting to smuggle 12 gold bars past Indian customs by hiding them in his rectum, local media reported.

The man, who is from Tamil Nadu, had arrived at Hyderabad’s Rajiv Gandhi International Airport via a Tigerair flight from Singapore early on Sunday (Feb 12) morning.

The flight was TR2624, which according to flight tracking website FlightAware had departed Changi Airport at around 10.40pm on Saturday night and arrived in Hyderabad at close to 1am on Sunday.

According to the Times Of India, his checked-in luggage had contained several LED lamps which prompted customs staff to conduct a search.

Eight gold bars, each weighing about 100g, were found hidden in the lamps’ back covers.

Although the man denied he was carrying more gold, he was put through a metal detector, which unearthed another 12 gold bars – weighing 1.2kg in total – in his rectum.

An Air Intelligence Unit official told the New Indian Express that the total gold seized was worth around 5.91 million rupees (S$126,000).

Stories like this come up every 6 months or so. Someone is caught smuggling cocaine in their breast implants or rare Amazonian fish up their pussies or gold bars up their assholes. And if you don’t sit there and wonder “would I be able to do that”, you’re a liar and I don’t take too kindly to liars. This one is tricky though, because TWELVE gold bars is a shit ton of gold bars.

So in the spirit of love, what better conversation to have on Valentines Day with the missus other than “if it came down to it, would you smuggle 12 bars of gold up your asshole for me?” It’s sweet, caring, and deep conversations like that is why I will be out on a romantic date tonight and definitely not at home eating Johnny Rockets and playing online poker in my New Jersey apartment. But maybe all we really need in this world is to find someone we’d be willing to smuggle 12 gold bars in our ass for. So while right now I can’t imagine  walking around with a full colon of $126,000 worth of golden nuggets stuck up my pooper, maybe that’s just because I haven’t found Mrs. Right. May next Valentine’s Day be different.

gold bars in your asshole+ 2 Tags